ALICIA OLATUJA AND THE BATTLE HYMN OF THE REPUBLIC 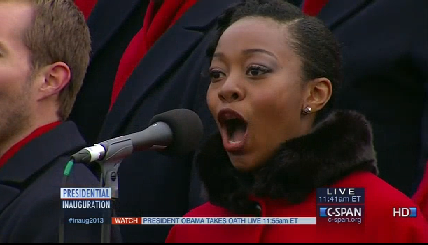 WOW MOMENT--Alicia Olatuja is her name.  She’s the 30-year-old soloist, who along with the Brooklyn (NY) Tabernacle Choir, sang the “Battle Hymn of the Republic” and by doing so brought the first “wow” musical moment to the President’s Inauguration ceremony and a tear to Mr. Obama's eye. 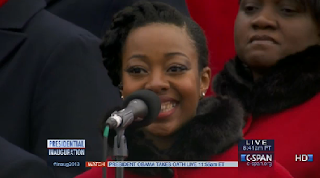 The New York Daily News reported the St. Louis born singer is a 2005 graduate of the music school at the University of Missouri.  She has performed at Joe’s Pub in New York to Carnegie Hall.  She also plays in an Afro-jazz band called The Olatuja Project with her husband Michael.  But not one gig has brought her the thundering national acclaim than that five-minute performance she and the Brooklyn Tabernacle Choir performed at our nation’s Capitol.

Alicia Olatuja and the Brooklyn Tabernacle Choir rocked the house.   Has there been a better sung rendition of Julia Ward Howe’s 1861 masterpiece?  If so, it will most likely be performed some time in the future.  Until then we have the BTC and Alicia Olatuja.

For the best quality rendition of Alicia’s solo go to C-span’s total inauguration coverage.  The Battle Hymn begins at the 20 minute mark.  http://www.c-spanvideo.org/program/InaugurationCe