THE NEW NORTH PARKER—Historic North Park, San Diego’s first suburban “city” is better known in architectural circles for its huge inventory of 1915-era Craftsman Bungalows.  But as the community has morphed into an arts/restaurant/retail and craft beer mecca, is it any wonder that the area is now attracting at least one of the city’s leading architectural lights in Jonathan Segal?

Segal is here.  He’s waded through much of the permitting process and is about to start building a commercial/residential lofts project at Upas and 30th Streets.

Called the North Parker, the new multi-use project will house four commercial units and about 25+ lofts on the floors above.  It replaces worn out buildings that once housed an ice house and Whitney’s appliance store up until the 1950s.  Until Jan. 1, 2013, the architectural eyesore over the years has been a mishmash of mostly forgettable businesses.

Demolition occurred in April with completion set for the late fall or early 2014.

Segal Background.
The following excerpt is from the November, 2012 issue of San Diego Home/Garden Lifestyles.  Titled, “The Art of Development,” by Mark Hiss.

Today, he is a successful architect/builder who has spearheaded the architect as developer movement.  Specializing in housing and mixed-use projects like the Q in Little Italy (where Bencotto restaurant is housed) and the in-progress Canada Dry in mid-town, Segal, lays claim to having constructed more individual buildings in downtown than any other person in San Diego history.

His firm has been awarded a half-dozen national architecture awards, and his multi-family development, The Charmer**, was named 2012’s project of the year by Residential Architect magazine.  The American Institute of Architects California Council has honored Segal, 50, as 2012’s distinguished architect…”

Trivia:  When Jonathan Segal completes his North Parker project he will be the second nationally known architect to have a project at that intersection.  Who is the first?

PLEASE NOTE: This blog has received many anonymous comments on the project both pro and con, but Pillar to Post will not publish anonymous comments.  I put my name on all my posts.  If you wish to comment, please include your name with your thoughts. 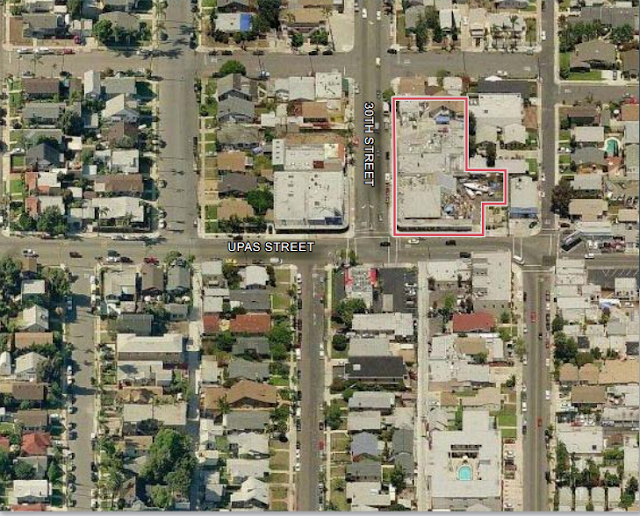