GUEST BLOG--By Melody Daversa--Karl Strauss Brewing Company is celebrating 24 years of pioneering San Diego’s local beer scene with a birthday bash this Saturday.  When the company first opened its doors on February 2, 1989, no one knew if craft beer would take off.  Now, with Karl Strauss helping to lead the charge, San Diego has become internationally recognized as a hotbed for craft beer culture and innovation.  Karl Strauss is celebrating this milestone with its third annual Changing of the Barrels event and the debut of its 24th Anniversary Flanders- style ale. 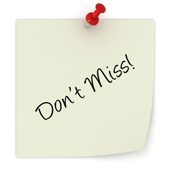 Changing of the Barrels is an intimate event taking place inside the brewery.  Limited to 100 tickets, guests will be the first to try the 24th Anniversary Flanders-style ale that spent a year in oak barrels.  They will also have the exclusive opportunity to sample the 25th Anniversary Doppelbock before it goes into barrels for the next twelve months.  “We’re looking forward to sharing the Anniversary brew with folks who tried it last year before it went into barrels.  It’s also fun to get a sneak peak at the 25th Anniversary beer.  We think people are going to dig our take on a doppelbock,” says Paul Segura, Brewmaster, Karl Strauss Brewing Company. Admission into the event includes beer for the evening, food by Miho Gastrotruck, live music by Leanna May and the Matadors, and a souvenir tasting glass. 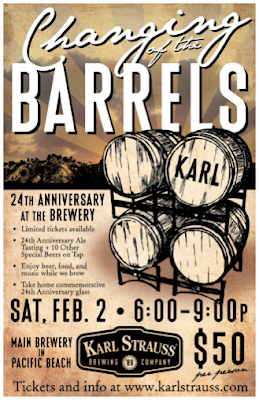 The 24th Anniversary Flanders-style ale is part of the company’s recently expanded barrel-aging program.  “We’ve been experimenting with sour beers for a while and we thought it would be fun to barrel age a bigger version of our Flan-diddly-anders” says Segura.  “The Flanders style is tart enough to make sour fans happy but still accessible enough for people who might not have tried a sour beer before.  It was a fun beer to make.”  The 24th Anniversary Flanders-style ale follows the Flemish tradition of carefully combining both barrel-aged and freshly fermented sour beers to create the ultimate blend.  The result is a complex sour ale with layers of tart cherry, pomegranate, currants and toasted oak. The beer finishes at 7.5% abv and nicely contrasts soft cheeses, grilled meats, and sweet glazes.

For more information on Karl Strauss’ barrel-aged Anniversary series and Changing of the Barrels event, visit www.karlstrauss.com.  Share it. Cheers.

Who, What, When, Where details:
Date: February 2, 2012
Time: 6 pm-9 pm
Where: Karl Strauss Brewing Company, 5985 Santa Fe Street, San Diego, CA 92109
Ticket Price: $50 per person, tickets online only
What's included: beer for the night, MIHO Gastrotruck food ticket, live music by Leanna May & the Matadors, and a commemorative 24th Anniversary tasting glass. This is also the only chance to try the 25th Anniversary Dopplebock before it goes into barrels for 12 months.

The bottle:
When we cut our teeth in the beer biz back in ’89, the thought of wild or spontaneously fermented ales left more than a sour taste in people’s mouths. Twenty-four years later, the mouth-puckering tartness of sour ales is craft beer’s newest obsession – an obsession we’ve been perfecting over the past few years. So, as a tribute to the times, we’ve brewed a Flanders-style Sour Red Ale to commemorate our 24th Anniversary. Keeping with Flemish tradition, our 24th Anniversary Ale is an expertly blended combination of oak barrel-aged and freshly fermented sour red ales. The resulting brew is both tart and complex, boasting layers of cherries, pomegranate, currants and toasted oak. Now show us your sour face! @Karl_Strauss #sourface
###

About Karl Strauss Brewing Company
Karl Strauss Brewing Company has pioneered the local beer scene since 1989 with innovative beer releases and award-winning favorites like Red Trolley Ale and Tower 10 IPA.  The company took home 23 medals in 2012 and is currently ranked #44 on the list of the country’s top craft breweries with sole distribution in California.  2013 is on pace to be another exciting year of double-digit sales growth, with the brewery opening to the public this spring and a new brewery restaurant slated for summer.  For more information visit www.karlstrauss.com or call the brewery at (858) 273-2739.  Share it. Cheers.

------------
Answer to trivia question posted on yesterday's blog.  The other locally well known architect that designed at project at 30th and Upas Sts. is the late Russell Forester, who had a remarkable career as one of San Diego's leading mid-century commercial and residential architects.  Early in his career Forester designed the first Jack-in-the-Box restaurants.

Trivia question:  What other building on 30th Street did Russell Forester design?   Answer in tomorrow's blog.