Update: This report was posted prior to the recent murder of Japanese journalist Kenji Goto. See below for more from National Press Club on this latest outrage.

The National Press Club calls on Iranian leaders to immediately release Washington Post journalist Jason Rezaian, who has been detained for more than six months with unknown charges against him.

"This confinement must end. It is sickening that Iran would jail a journalist who was only trying to inform the world fairly and impartially about happenings in the country."

The Washington Post in its Jan. 29 edition included a story about the confinement of Rezaian, who is the organization's bureau chief in Tehran. Post Executive Editor Martin Baron said in the article that he hasn't heard any accounting of the charges against Rezaian, who has not been given access to an attorney since his confinement began July 22.

"Iran only hurts itself by not letting reporters do their jobs. The Post provides vital information to leaders in the nation's capital and around the world. Iran must show the world that it welcomes fair-and-open reporting about its activities."

A year-end review by the NPC's Freedom of the Press Committee found that press freedom and government transparency in 2014 "regressed more than it progressed."

Reporters Without Borders recorded 66 journalist deaths last year (2014), 119 kidnappings and 178 imprisonments.  That is not counting the toll in Paris as a result of the Charlie Hebdo assassinations.

Update:
At the end of January 2015 no charges have been filed against Jason Rezaian, according to Al Arabiya News.  Recently, Al Arabiya reported “Iran’s official news agency reported that Rezaian...will be tried ‘soon,’ but the charges against the American-Iranian citizen remain unknown.” 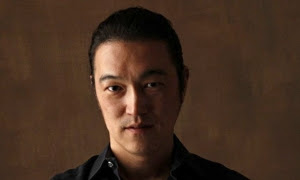 Photo/Image: Kenji Goto
The National Press Club deplored the slaying of Japanese journalist Kenji Goto and said the perpetrators must be brought to justice after Japanese authorities said Feb. 1 they believe a video depicting Islamic State militants killing Goto is authentic.
Goto, who had been held hostage before his death, was a highly-regarded journalist known for compassionately recording the difficulties children and other civilians faced in war zones.
"The wanton taking of any human life is disgusting," National Press Club President John Hughes said. "The murder of such a talented, dedicated reporter is particularly deplorable because the world loses a unique perspective on the human consequences of conflicts."
Hughes called on international leaders to do all they can to hold Goto's killers accountable and to make every effort to protect journalists, particularly those in conflict zones.
News reports indicate that Goto traveled to Syria in October to try to secure the release of Haruna Yukawa, who had been taken hostage months earlier and also reportedly was recently killed.
According to the Committee to Protect Journalists, Syria has been the world's most dangerous country for reporters for more than three years, with at least 80 journalists killed.