STEPPING OUT--My doctor (and fitbit contraption) say we should all take 10,000 steps a day to keep heart healthy.

Here’s a recent trek toward meeting that goal.  Embarking after dusk from 28th & Upas just when the moon is rising over the I-805 (now how’s that for a romantic image), I fast walked to 30th Street, where I turned north toward University Avenue.   Pausing at 30th and Upas, I’ve walked by one architectural firm and no less than a dozen restaurants within half a block.

That intersection was once dingy (din-gee) and a site of a couple of murders back when the corner back was gloomed by a heavy leather bar.  Now the entire corner is awash with bright lights and hipster ambiance.  Thank you, gentrification. Take that any day compared with the blight that was there before.

Glancing up at the new high rent North Parker apartments, I notice one of the upper units hasn’t drawn the shades.  This is the first look I’ve seen of the upstairs downstairs configuration of the uber lofts.  The unit is occupied with four or five busily installing a monster TV.

Next, I notice Lefty’s Pizza at Myrtle and 30th has a new all-weather enclosed awning.  It gives more privacy to customers and yet they can still have that sidewalk café feeling.

Next door to Lefty’s, the long-time vegan restaurant is no more.  In its place will be a new eatery with a distinctive Mexican flavor.

Moving toward University, I’ve now gone by two more architectural firms, two hair salons, pet hospital and someone has put a pre-construction fence around what used to be the late (could have been great) Eddie’s cheesesteak emporium.  What news awaits us at that spot?

WOW, the waffle place next to the coin-operated laundry on 30th is closed but only for the night.  I wish my diet would allow me to eat breakfast there every day.

On the west side of 30th south of Capps there’s a stretch of homes that are being converted into businesses.  One example is Charly Poppins Interior Design shop. 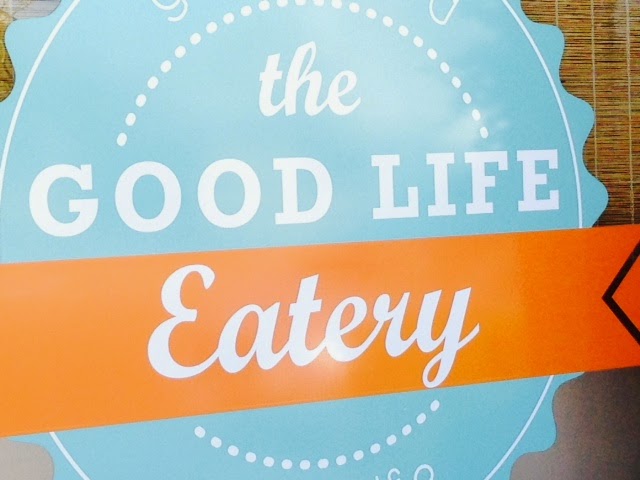 At Dwight and 30th, a new restaurant has opened called the Good Life with its motto Good food, Good life.  The cuisine better be great because life expectancy at that site has been turnover city.  I wish them luck and I will try it this week. 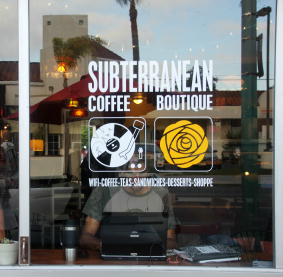 Subterranean is a warm and well lit coffee house that is always filled with sounds of clicking computer keys.  Located on 30th between Capps and North Park Way,

Subterr is owned by a young couple with first baby, who live on 28th Street.   Locals quiz: if you know who Capps street was named after you are either old, a history buff or a native.  I’m not giving up the answer and I’ve put it into your head that you will wake up at 3 am craving an answer.

At 30th and North Park Way at the West end of Waypoint Restaurant, Dark Horse Coffee is about to open its new shop (they’re also on Adams Ave).  Looks like it’ll be a couple more hours by the looks of the walk-by.

I spy Cloud 9 Hookah lounge on North Park Way.   Hmmm.  I’m just came back from Istanbul and hookah-ing was commonplace.  Someday there may be a local hookah stop for me, but not now.

Turning the corner at 30th and heading West on University, I notice there will be a new beer/wine restaurant where Chito’s Shoe Repair store (now on Lincoln near 30th) and Chester’s Furniture used to be.  Both small spaces have been joined together. Open in a month, maybe.

Swami’s has put up bigger signs saying they’re open for dinner.  So far, I LOVE them for lunch.

Next door to Swami’s is Safehouse, a Raman and craft beer establishment.
It is looking good and is finally busy.  Definitely will stop in very soon.

At West Coast Tavern things look the same.  New owners are taking over the place.

I stopped by Starbucks at 29th to try one of those new Flat Whites, plus take advantage of the discount on the pastries just before closing.

Reminds me to go buy some coffee beans at Claire de Lune.  I buy my beans from a different North Park coffee house on a rotating basis.  I love them all.

I stop by the liquor store at Grim and University for a $5.45 carton of low fat milk.  Ouch.  If this ‘hood needs one thing now it isn’t another liquor outlet, but instead a reasonably priced mom and pop grocery store.  Put it  between Upas and University and make it look like ubiquitous corner stores all over San Francisco neighborhoods. 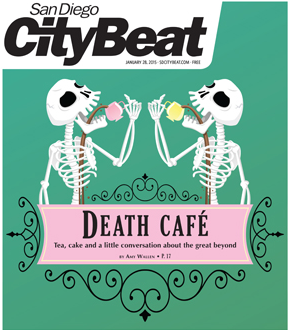 Leaving the liquor store I spot the latest edition of North Park-based San Diego City Beat magazine.  Its eye catching cover by Lindsey Voltoline illustrates Amy Wallen’s article “Death Café: Tea, cake and a little conversation about the great beyond.  The issue is now folded inside my Starbucks bag carrying my chocolate croissants.  All for later enjoyment.

Also, some smart entrepreneur will open up a Rickshaw operation between Upas and Adams Avenue along 30th Street to take advantage of the craft beer centric tourists flocking to historic and hipstoric North Park.  Even better legalize scooter cabs like the pulmonia’s that rule the streets in Mazalan. 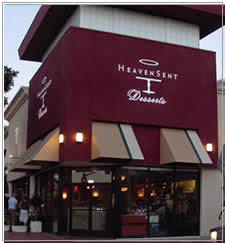 I’m reminded by the mission statement of this blog to stick with walking. Never mind the rickshaws.

Victory for me.  Full moon is rising.  I hear Clearance Clearwater Revival in the back of my mind. Despite the nighttime pitfalls of crummy sidewalks, I managed 5,000 fitbit steps in less than 40 minutes.

Tomorrow, one of my favorite editorial interns from San Diego Home/Garden magazine is buying me coffee and dessert at Heaven Sent. Expect a menu report soon.

Cheers, North Park and thanks for joining me on my walk.