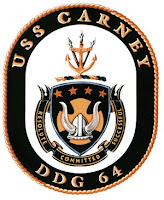 Thanks to the U.S. Navy’s community outreach program, this blog was provided images of a recent voyage of the USS Carney (DDG-64), the 14th Arleigh-Burke class guided-missile destroyer as it conducted a regular patrol cruise from the Atlantic via the Mediterranean Sea and into the Black Sea.

Although posted images are not in chronological order, the USS Carney (commissioned in 1996) sailed from Christmas to Summer this year beginning at the U.S. Naval Base in Rota, Spain on the Atlantic.

Images give a brief look at day to day operations aboard one of America’s top naval vessels.

The USS Carney, named after Admiral Robert Carney who served as Chief of Naval Operations during the Eisenhower administration, called on various ports as it made a round trip between Rota and Odessa, Ukraine.