AMERICANA / READ THIS SO YOU WON’T BE SURPRISED WHEN BETO O’ROURKE BECOMES THE NEXT U.S. SENATOR FROM TEXAS

Robert Francis "Beto" O'Rourke (/ˈbɛtoʊ/; born September 26, 1972) is an American politician and businessman serving as the U.S. Representative for Texas's 16th congressional district in his native El Paso, first elected in 2012. He is the Democratic nominee in the 2018 Texas Senate race, running against Republican incumbent Ted Cruz.

O'Rourke won the general election held in November 2012, defeating incumbent U.S. Representative Silvestre Reyes in the Democratic primary earlier that year. The district includes most of El Paso County. Prior to his election to Congress, O'Rourke was on the El Paso City Council, from June 2005 to June 2011. On March 31, 2017, O'Rourke announced his candidacy for the U.S. Senate against incumbent Texas Senator Ted Cruz in the 2018 election.—from Wikipedia. 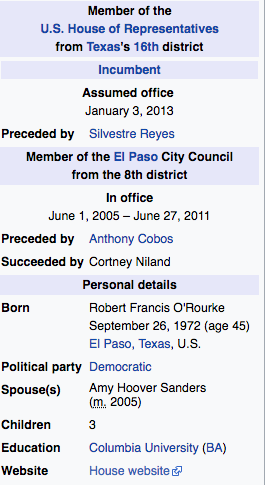