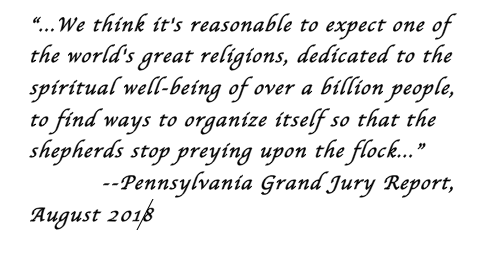 The following is an excerpt from a long-awaited grand jury investigation into clergy sexual abuse in Pennsylvania was released Tuesday in an interim redacted form. The report detailed decades of alleged misconduct and cover-ups in six of the state's eight Roman Catholic dioceses.

The roughly 900-page report, not including exhibits, is thought to be the most comprehensive of its kind and paints a horrid portrait of activity that occurred in the dioceses of Scranton, Allentown, Harrisburg, Greensburg, Erie and Pittsburgh, implicating 300 "predator priests" statewide who committed "criminal and/or morally reprehensible conduct."

Pennsylvania’s attorney general released the scathing report that revealed the results of a two-year investigation into hundreds of sexual abuse allegations. The probe found that at least 1,000 children had been abused at the hands of Catholic clergy members, dating back to the 1940s.

“Predators in every diocese weaponized the Catholic faith and used it as a tool of their abuse,” Attorney General Josh Shapiro said Tuesday. “Priests were raping little boys and girls and the men of God who were responsible for them not only did nothing, they hid it all. For decades.”  Click here for the full report.

GRAND JURY INTRODUCTION.
“We, the members of this grand jury, need you to hear this. We know some of you have heard some of it before. There have been other reports about child sex abuse within the Catholic Church. But never on this scale. For many of us, those earlier stories happened someplace else, someplace away.

Now we know the truth: it happened everywhere.

We were given the job of investigating child sex abuse in six dioceses - every diocese in the state except Philadelphia and Altoona -Johnstown, which were the subject of previous grand juries. These six dioceses account for 54 of Pennsylvania's 67 counties. We heard the testimony of dozens of witnesses concerning clergy sex abuse.

We subpoenaed and reviewed, half a million pages of internal diocesan documents. They contained credible allegations against more than 300 predator priests.

Over one thousand child victims were identifiable; from the church's own records.

We believe that the real number - of children whose records were lost, or who were afraid ever to come forward - is in the thousands.

Most of the victims were boys, but there were girls too. Some were teens; many were prepubescent.

But church leaders who preferred to protect the abusers and their institution above all brushed all victims aside, in every part of the state.

As a consequence of the cover-up, almost every instance of abuse we found is too old to be prosecuted. But that is not to say there are no more predators. This grand jury has issued presentments against a priest in the Greensburg diocese and a priest in the Erie Diocese, who has been sexually assaulting children within the last decade. We learned of these abusers directly from their dioceses - which we hope is a sign that the church is finally changing its ways. And there may be more indictments in the future; investigation continues.

But we are not satisfied by the few charges we can bring, which represent only a tiny percentage of all the child abusers we saw.

We are sick over all the crimes that will go unpunished
and uncompensated. This report is our only recourse. We are going to name their names, and describe what they did - both the sex offenders and those who concealed them. We are going to shine a light on their conduct because that is what the victims deserve.

And we are going to make our recommendations for how the laws should change so that maybe no one will have to conduct
another inquiry like this one. We hereby exercise our historical and statutory right as grand jurors to inform the public of our findings.

This introduction will briefly describe the sections of the report that follows. We know it is very long. But the only way to fix these problems is to appreciate their scope.”


GRAND JURY RECOMMENDATIONS
“Grand jurors are just regular people who are randomly selected for service. We don't get paid much, the hours are bad, and the work can be heartbreaking. What makes it worthwhile is
knowing we can do some kind of justice.

We spent 24 months dredging up the most depraved behavior, only to find that the laws protect most of its perpetrators, and leave its victims with nothing. We say laws that do that need to change.

First, we ask the Pennsylvania legislature to stop shielding child sexual predators behind the criminal statute of limitations. Thanks to a recent amendment, the current law permits victims
to come forward until age 50. That's better than it was before, but still not good enough; we should just get rid of it. We heard from plenty of victims who are now in their 50's, 60's, 70's, and even one who was 83 years old.

Second, we call for a "civil window" law, which would let older victims sue the diocese for the damage inflicted on their lives when they were kids. We saw these victims; they are marked
for life. Many of them wind up addicted, or impaired, or dead before their time.

The law in force right now gives child sex abuse victims twelve years to sue, once they turn 18. But victims who are already in their 30's and older fell under a different law; they only got two years. For victims in this age range, the short two-year period would have expired back in the 1990's or even earlier
- long before revelations about the institutional nature of clergy sex abuse.

We think that's unacceptable. These victims ran out of time to sue before they even knew they had a case; the church was still successfully hiding its complicity. Our proposal would open a limited "window" offering them a chance, finally, to be heard in court. All we're asking is to give those two years back.

Third, we want improvement to the law for mandated reporting of abuse. We saw from diocesan records that church officials, going back decades, were insisting they had no duty to
report to the government when they learned of child abuse in their parishes. New laws make it harder to take that position; but we want them tighter. The law penalizes a "continuing" failure to report, but only if the abuse of "the child" is "active."

We're not sure what that means and we don't want any wiggle room. Make it clear that the duty to report a child abuser continues as long as there's reason to believe he will do it again - whether or not he's "active" on any particular day,
and whether or not he may pick a different kid next time.

There are arguments on both sides about whether it's proper
to use these agreements in securing lawsuit settlements. But there should be no room for debate on one point: no non -disclosure agreement can or should apply to criminal investigations. If the subject of a civil lawsuit happens also to concern criminal activity, then a confidentiality agreement
gives neither party either the right or the obligation to decline cooperation with law enforcement.

All future agreements should have to say that in big bold letters. And all this should be enacted into a law.

We believe these proposals will assist in the exposure and prosecution of child sexual abuse, and so it is within the scope of our duty to make them. But to be honest it's not enough.

We don't just want this abuse punished by criminal and civil penalties. We want it not to happen at all. We think it's reasonable to expect one of the world's great religions, dedicated to the spiritual well-being of over a billion people, to find ways to organize itself so that the shepherds stop preying upon the flock. If it does nothing else, this report removes any remaining doubt that the failure to prevent abuse was a systemic failure, an institutional failure.

There are things that the government can do to help. But we hope there will also be self -reflection within the church,
and a deep commitment to creating a safer environment for its children.