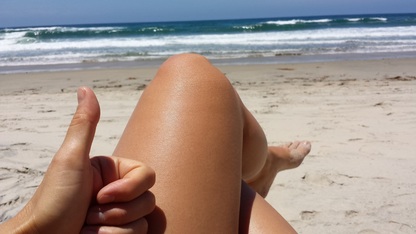 Easy to understand why La Jolla Cove makes anyone’s best beach list. It’s the gem of La Jolla. The shoreline curves gently with steep cliffs to the north and a sloping shore to the south which spills into large flat rocks that can be walked over.

Next to the cliffs is a long walking trail that is adjacent to a grassy park. A short walk up the hill from the Cove takes you into downtown La Jolla. The Cove area is small and can get crowded early. If so, just north of the Cove is the popular sandy beach of La Jolla Shores. Cozy vs. big beach.

Psst. About a mile north of La Jolla Shores is Black “all nude” Beach for those who like to tan all their hide by the seaside.

Coronado Shores and La Jolla Shores could be twins. Huge amount of soft white sand surrounded by killer views. Both beaches are perfect to bring those visiting snowbirds to the ocean, especially if it’s their first trip to California. BTW Surfers prefer big wave La Jolla over the flat wave Coronado.
Of course, any media mention of Coronado Shores is obligated to mention the 1950s Billy Wilder directed film “Some Like it Hot”, which was filmed on the sand next to the Hotel Del Coronado. Shots of Tony Curtis, Jack Lemmon and Marilyn Monroe frolicking on the beach is such a worn nugget that we won’t show them.
The two local destinations mentioned here were among just four California beaches that made the Top 25 best beaches in the U.S. says travel blog TripAdvisor.com

Typical TripAdvisor reviews of Coronado Shores: Miles of white sand and gorgeous views! The ends are bordered by two significant military properties. North is one of the world’s largest aircraft carrier bases and to the south it’s awesome to see the Navy Seals training and doing drills.

The two San Diego County beaches are among just four California beaches that made it into the top 25. The other two are Moonstone Beach in Cambria and Santa Monica State Beach. OK, what’s the best beach in the US? TripAdvisor insists it is Saint Pete Beach in St. Pete Beach, Fla.