THE FOODIST / NUTTY FOR NUTELLA 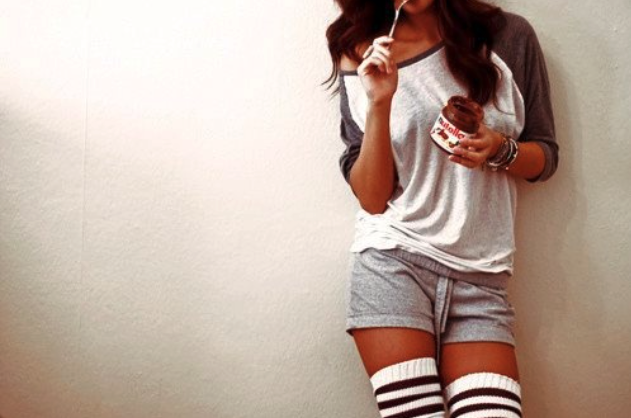 GUEST BLOG / By Karen Harris--Who doesn't love the ooey-gooey goodness of Nutella? Peanut butter's classier cousin is not only delicious but versatile as well: You can spread it on toast, dip stuff in it, drizzle it over cake, or eat it straight from the jar with your index finger (no judgment).

Though you've almost certainly done at least one of those things, what you might not realize is that Nutella is an Italian masterpiece and probably the best by-product of World War II.

Nutella was the love child of Pietro Ferrero, a name probably most familiar to you from the boxes of another sweet you've definitely scarfed down at some point: Ferrero Rocher.

Ferrero began his career in candy as a baker in 1920s Italy, when he noticed workers at the nearby factory eat their lunches of bread, cheese, tomatoes, and olive oil outside and decided to create a tastier spread to replace their humdrum veggies and dairy. After moving to Piedmont, he was introduced to gianduja, a thick, nutty spread made with chopped hazelnuts.

It was delicious but also unwieldy, so thick that it often tore up the bread a hapless snacker tried to spread it on. After much experimentation, Ferrero had a stiff paste of dark chocolate, hazelnut, and plenty of sugar that he called pastone based on gianduja.

At the time, it was still quite a formidable foodstuff, sold in a solid block, but it was immediately a hit with the children of Italy as well as those factory workers.

When World War II broke out, many governments imposed rations on several foods and other supplies to ensure military access to them, including chocolate. Hey, nothing keeps the spirit up like a good sugar rush, right?

Those left on the home front were almost as despondent over the lack of chocolate as they were over their loved ones in battle, however, so with sweet teeth yearning to be satisfied, Ferrero returned to his experiments with gianduja.

To make up for the scant cocoa that had to be carefully divided among the batches, he ground the hazelnuts into a smooth paste and added even more sugar, but it was still too thick to easily spread.

Then he had a stroke of genius: Cocoa may have been scarce, but cocoa butter wasn't. It was also the key to the consistency he wanted.

Ferrero's new and improved spread was such a departure from the O.G. (original gianduja) that it needed a new name. Since the main ingredient of the spread is hazelnut, Ferrero simply tacked the Latin suffix "-ella" to the word "nut."

Incidentally, the suffix can be translated as "sweet," "beloved," and/or just an all-around positive vibe, which we can all agree describes the essence of Nutella.

In 1964, Nutella was introduced to the U.K. market, and Brits went nuts for the chocolaty spread. The following year, the Ferrero Company did some test trials in France, where it was a hit with Parisians as well. Within a few years, Ferrero had launched Nutella across Europe, and about 10 years after that, Nutella went Down Under.

Americans were actually late to the Nutella bandwagon; the Ferrero Company didn’t start importing Nutella to the U.S. until 1983, and they were initially stumped by the challenge of marketing to Americans.

At first, U.S. P.R. folks at Nutella touted the spread as a great addition to a healthy breakfast and played up its inclusion of skim milk, failing to mention its 21 grams of sugar per serving.

Parents thought they were giving their children a healthy option, so when they became aware of Nutella's sugar content, they weren't happy, to say the least. Americans love their sweets, however, especially for breakfast, so Nutella's popularity soared regardless.

More about the Writer:

Karen Harris left the world of academic, quitting her job as a college professor to write full-time. She spends her days with her firefighter husband and four daughters on a hobby farm with an assortment of animals, including a goat named Atticus, a turkey named Gravy, and a chicken named Chickaletta.