And here it is, the Point Bonita Lighthouse. Not a tall tower but a squat solid structure. The building on which the tower rests is 24 by 14 feet, and the tower extends 16 feet above the roof, and is 12feet in diameter. The lamp is 7 feet high, a dominant part of the building itself. The lighthouse light is operational today, as it was when it was first lit. How many sailors and captains took a deep sigh of relief at the sight of its beam shining 18 miles out to sea? One second off, three on, One second off, three on,... Port within reach! Payday! and the Barbary Coast. (Hornpipe)

To the sailors and passengers alike, after weeks at the mercy of the sea, this lighthouse must have evoked the image of a stalwart sentinel: of welcome!

For modern day lighthouse explorers, getting to this lighthouse is an adventure of its own.  For starters, if you arrive from San Francisco there's the Golden Gate bridge to cross.  Follow winding roads on scene Marin headlands to a one-way traffic tunnel that leads to a pedestrian tunnel bored through solid rock which leads you to a walking suspension bridge.  You're there. 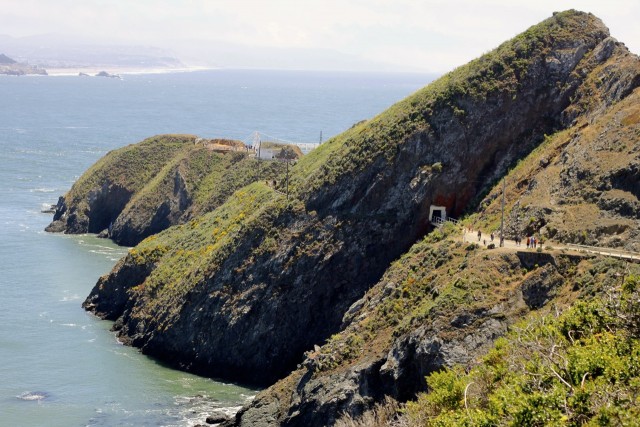