COFFEE BEANS & BEINGS / NO PLACE TO “GO”? IS IT STARBUCKS FAULT?

Allison Morrow, CNN Business reporter calls out Starbucks for ending the era of free toilet use.  CNN is snarky in doing so by saying because the coffee chain charges so much for coffee that it should be able to hire bathroom attendants.

CNN forgets the lack of public toilets is a government problem not a coffee house chains career calling.

Here's what Morrow has to say: "...Starbucks is not the bathroom hero we deserve, but it's the one we have. American cities are particularly lacking public toilets, and rather than deal with that directly, lawmakers have been content to let Starbucks and other chains take on the duty. (Yes, I said duty.)

New York's former mayor Michael Bloomberg famously deflected public pressure to address the restroom issue 20 years ago, quipping that "there's enough Starbucks that'll let you use the bathroom." (Then he proceeded to tackle the real scourge of Gotham known as Big Soda... but that's a rant for another day.)

It's been an imperfect solution, at best, but it's about to get a lot more complicated.

Here's the dilemma: Starbucks is done being a public toilet," says Morrow.

[so are a lot of companies in America].

Morrow, again: "...The company's interim CEO Howard Schultz recently said its stores may have to re-evaluate the policy that lets anyone, customer or not, use the bathroom. Chiming in on the story are CNN’s Nathaniel Meyersohn and Danielle Wiener-Bronner: Schultz said he is worried about safety, and while he didn't reverse the policy outright, he seems to be worried about a growing "mental health" problem threatening Starbucks employees. (As a quick aside, I don't know what he means by that mental health comment, and he didn't offer any examples. My guess is that Starbucks employees are just legitimately tired of having to clean the bathroom so much, and Schultz is doing all he can to keep his staff from revolting and forming unions. Anyway, the point is, whatever the reasoning, Starbucks has the full right to lock up its bathroom doors whenever and however it wants, and unless you own stock you don't get any say in that decision). For more than 20 years, Starbucks has been a de-facto public bathroom, especially in cities, and now that it's re-evaluating its policy, it could force the issue back into the political sphere.

"The commercial solution is really not a great solution... No rational person would want Starbucks to pay for traffic lights or streetlights," said Lezlie Lowe, author of "No Place to Go: How Public Toilets Fail our Private Needs."

Morrow responds, “Hey, Howie: Wait wait wait a dang minute before you go and force me to spend five bucks on an over-roasted (yeah I said it) cup of coffee just so I can use the toilet whenever I'm foolish enough to run errands in Manhattan.”

Morrow adds, “I get it — bathrooms are gross, and no one wants to think about their barista having to bounce from the milk frother to the toilet plunger to the cash register and back. “So here's a thought: Rather than locking up the loo, make it the best part of the store. Hire bathroom attendants to free baristas from the extra work. Turn your sad water closets into palaces, with multiple stalls and fresh flowers and mints and scented candles and Enya's greatest hits playing on the speaker system. Stock them with that nice, soft toilet paper and put up that flattering lighting that all the Instagram influencers love,” says CNN.

PILLAR TO POST.ORG OFFERS: "...Nice try, Pollyanna. Paying customers aren’t the problem. For example, free toilets mean the homeless are free to take half hour sponge baths every morning. Sad but true. Meanwhile, Starbucks is reserving toilet use to paying customers. It’s their right by saying no gas, no squeegee."

Lack of public toilets is a government problem.  Build them and they will come.

Picture below is one on topic civic solution in San Francisco. 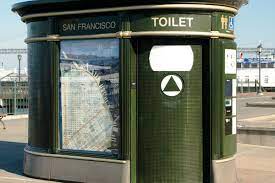