DESIGN OF OUR TIMES / BRILLIANT DESIGN PUBLICATION FOUNDER DIES AT 54 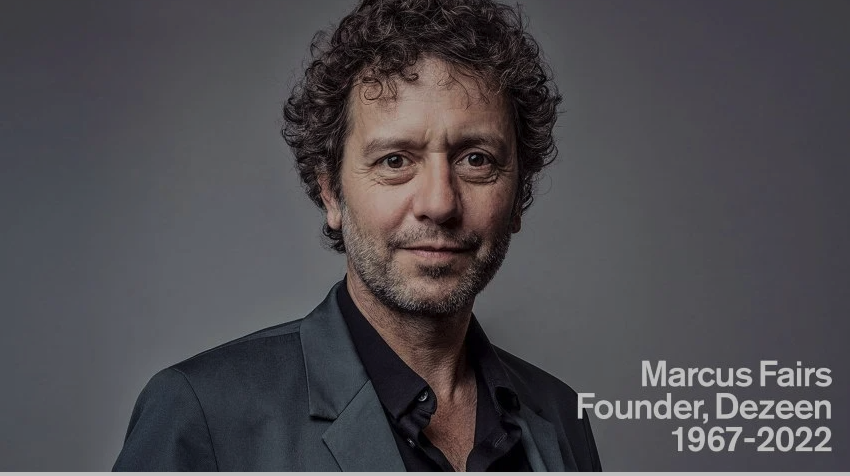 GUEST BLOG / By Benedict Hobson, Dezeen online design group--We are very sad to announce the sudden and unexpected death of Dezeen founder, CEO and editor-in-chief Marcus Fairs at the age of 54. Marcus, who was a brilliant journalist, visionary entrepreneur and much-loved father, husband, colleague and friend, was taken to hospital on Tuesday last week after becoming unwell.

Following a short period in intensive care, he died on Thursday 30 June 2022. He is survived by his wife Rupinder Bhogal, who is also a director at Dezeen, his children Jordi and Millie Fairs, his parents David Fairs and Georgina Ledward, and his sister Elly Fairs.

Marcus forever stamped his mark on the architecture and design industries as a pioneering, creative and ambitious journalist. Not least through Dezeen, which he launched in his spare bedroom in 2006 and grew to become the world's most popular and influential online architecture, interiors and design magazine.

By doing so, he changed the landscape of design journalism, bringing the global design community closer together and helping to inspire and launch the careers of countless architects and designers around the world.

Last year, Dezeen was acquired by Danish media company JP/Politiken Media Group, a move that helped secure the future of the company that Marcus built. At the time of the acquisition, he wrote: "Dezeen exists to give our global community a platform where the best work and the most important topics are shared, celebrated and debated."

"We want Dezeen to be able to continue to do this long into the future. We want Dezeen to forever be a bastion of independent journalism, a champion of architecture and design and a force for good in the world."

Tragically, our leader and mentor is no longer with us. But the entire Dezeen team is committed to continuing what Marcus started and ensuring that his legacy stands the test of time.