MEDIA MONDAY / WHAT WILL DOJ DO WITH JAN. 6 COMMITTEE FINDINGS? WILL TRUMP EVER BE HELD ACCOUNTABLE?


The bipartisan Congressional investigation has provided Attorney General Merrick Garland with a roadmap for potential prosecution of the former president — that is, if he’s willing to follow it.

GUEST BLOG / BY ERIC LUTZ, VANITY FAIR MAGAZINE--The January 6 committee on at its most recent meeting presented a great many important — and disturbing — revelations about the role extremist groups played in last year’s Capitol attack. But perhaps the two most significant moments of the panel’s seventh public hearing came at the beginning and the end of the proceedings, each courtesy of ranking member Liz Cheney.

The first was during her opening statement, when she waved away her party’s latest talking point — that Donald Trump was “incapable of telling what was right or wrong,” and was something of a victim in this story, an innocent who was “manipulated” or “poorly served” by grifters and conspiracy theorists. “This, of course, is nonsense,” Cheney said. “President Trump is a 76-year-old man. He is not an impressionable child. Just like everyone else in our country, he is responsible for his own actions and his own choices.” 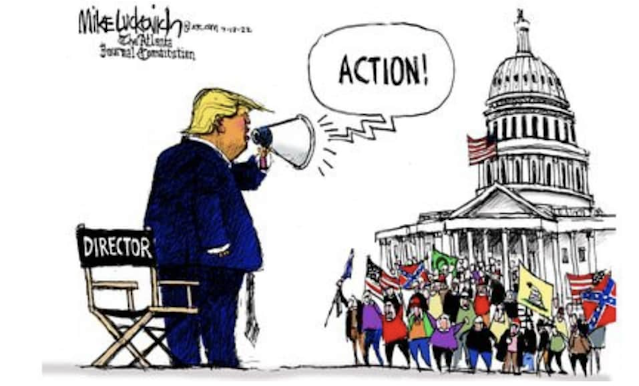 The second came during her closing remarks, which she used, for the second hearing in a row, to warn that the targets of the committee’s investigation may be seeking to obstruct it. Except this time, it wasn’t an anonymous Trumpworld figure she was accusing of potential witness tampering; it was Trump himself. The former president, Cheney said, had attempted to call an unnamed witness following Cassidy Hutchinson’s testimony last hearing.

These bookends served both as a clarion call for accountability and as an important reminder: For all his towering stupidity and childishness, this potential criminality was not merely occurring around Trump; he was its ringleader, the “hub” from which the various “spokes” of this antidemocratic conspiracy sprung, as former prosecutor Andrew Weissmann suggested in the New York Times earlier this week. Trump does not just attract, welcome, and enable bad actors; he is the most brazen of the bunch, personally leading the effort to carry out a coup in 2020 and now, to try and cover it up. As Jamie Raskin, one of the Democrats who led Tuesday’s hearing summarized it: “American carnage — that’s Donald Trump’s true legacy. His desire to overthrow the people’s election and seize the presidency…nearly toppled the constitutional order and brutalized hundreds of people.”

Trump’s culpability in the Capitol attack — and the myriad other outrages he suffered onto the country throughout his presidency — has been obvious since the beginning, of course. But one of the striking aspects of the hearings so far has been how coordinated all of this was, the extent to which the chaos of January 6 was actually part of the plan. It was a desperate attempt to cling to power, yes.

But it wasn’t only an exercise in slapstick gone awry, as John Bolton, the former national security adviser, characterized it Tuesday. Speaking to CNN’s Jake Tapper, Bolton said that what happened January 6 wasn’t really a coup because he’d helped orchestrate some — !!! — and they took more planning than Trump and his goons were capable of. “That’s not the way Donald Trump does things,” Bolton said. “It’s rambling from one half, vast idea to another. One plan comes through, and another comes up. That’s what he was doing.”

True, but also not the full picture: While Trump and his gang of halfwits — Rudy Giuliani, Sidney Powell, former Overstock.com CEO Patrick Byrne, who a Washington Post source recalled was “nonstop housing meatballs” during a heated, consequential White House meeting about the election overturn scheme in December 2020 — were casting about for any way possible to undo Joe Biden's victory, however ludicrous, there was also real conspiring going on.

Previous hearings demonstrated how what appeared to be frenzied pressure campaigns against Mike Pence, local election officials, and the DOJ were connected to the fraudulent electors plot cooked up by Trump attorney John Eastman. Similarly, Tuesday’s hearing revealed how little accident there was in the chaos of the January 6 attack. Indeed, even the apparent ad-libs in Trump’s speech appeared well-orchestrated; though his encouragement to march to the Capitol to “fight” for him didn’t appear in the actual text of his speech, violent extremists seemed to know it was coming.

“POTUS is just going to call for it unexpectedly,” January 6 organizer Kylie Kremer wrote to MyPillow CEO Mike Lindell in a message revealed by congressional investigators Tuesday. “Trump is supposed to order us to the capitol at the end of his speech, but we will see,” the far-right activist Ali Alexander wrote in another.

As Stephanie Murphy, the other committee member who led Tuesday’s hearing put it: “This was not a spontaneous call to action, but rather it was a deliberate strategy decided upon in advance by the president.” That’s an important point. There would still need to be accountability if this were all just the “rambling” Bolton described; accidentally inciting an insurrection would still be a gross violation of his office. But the January 6 committee has been making a convincing case that Trump knew exactly what he was doing and must finally face consequences for his actions, both from the political system and from the legal system. Will he? Who knows? On the one hand, the committee has given Merrick Garland a roadmap for potential prosecution — and even some specific acts to investigate, including Trump’s alleged attempt at witness tampering. On the other hand, he’s managed to avoid accountability his whole life, and it’s possible he could do so again — perhaps by passing it all off on an underling like Mark Meadows, the former chief of staff that Trump’s legal team reportedly believes will soon be taking a fall.

That would be a shame — not only because skating would allow Trump and other aspiring authoritarians to flout the law and attack American democracy going forward, but because accountability may be the only hope for healing from what transpired during and at the conclusion of his presidency. There was another striking moment Tuesday: As the hearing adjourned, Capitol rioter Stephen Ayres — one of the live witnesses who testified before the committee — embraced and apologized to three Capitol police officers who had come under siege during the January 6 attack.

It wasn’t quite a scene of redemption — that’s still probably a long way off for Trump’s extremists and enablers, even those who have gone before the committee — but it was perhaps a small return, for one man, to the shared reality he had previously turned his back on in favor of his leader’s paranoid fantasy. Will accountability allow America to finally break the fever of Trumpism? Maybe, maybe not. But it’s hard to imagine doing so without it. “The potential was so much more,” former Oath Keepers spokesman Jason Van Tatenhove testified to the committee Tuesday. “I do fear for this next election cycle because who knows what that might bring? If a president that’s willing to try to instill and encourage to whip up a civil war amongst his followers using lies and deceit and snake oil, and regardless of the human impact, what else is he going to do if he gets elected again?” 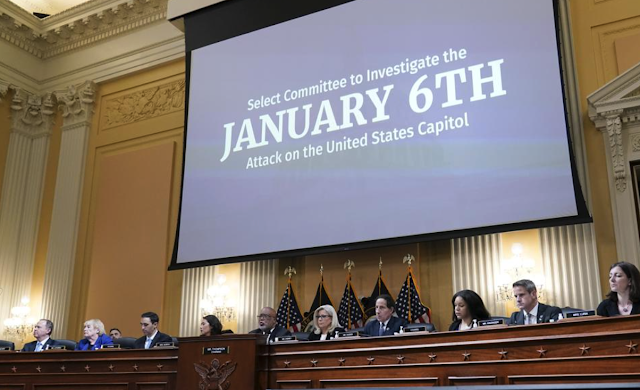