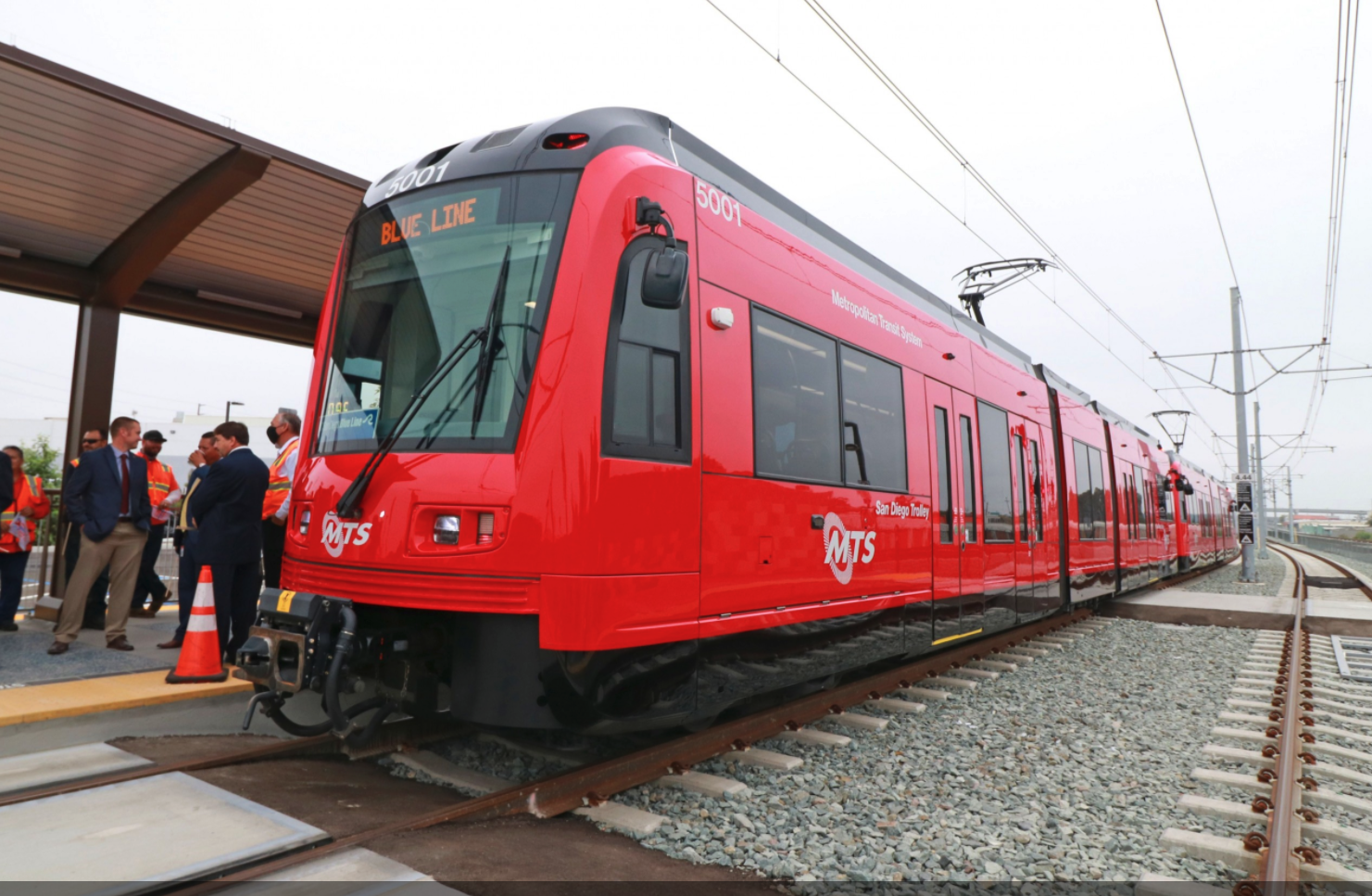 Could an Elevated Trolley be the Answer to Long US/MEX Border Wait Times?

GUEST BLOG / By Sandra Dibble, VOICE OF SAN DIEGO--Imagine stepping into an elevated trolley car in Tijuana — and moments later emerging across the border in the United States.

No more hours spent inching forward on foot toward the San Ysidro Port of Entry.

No more getting stuck in fume-choked lines of idling cars.

The San Diego Association of Governments is supporting a private-sector study that looks at extending San Diego’s Blue Line Trolley over the border into Tijuana. If it sounds far-fetched, proponents point out that their idea is not so different from the Cross-Border Xpress, the airport pedestrian bridge connecting travelers in San Diego to Tijuana’s A.L. Rodriguez International Airport.

In this case, the aim is to cut wait times and reduce vehicle pollution at the San Ysidro Port of Entry — the busiest border crossing in the Western Hemisphere. SANDAG this month awarded $50,000 to Los Angeles-based Cordoba Corporation to research the idea — and come up with some detailed answers by September.

--What permits would it need?

--What would be the time frame?

--Where's the money coming from?  SANDAG envisions funding it through a private-public-partnership — but that question has not been answered.

Few would dispute the need for a solution. In this case, the effort is being carried out as part of SANDAG’s 2021 Regional Plan. “We have huge issues with border congestion, it creates a lot of air quality issues, safety issues around the border,” Antoinette Meier, SANDAG’S senior director of regional planning, told me last week. “This is an opportunity to address them in a really sustainable way.”

To understand the situation at San Ysidro, look no further than last Friday and Saturday mornings, when pedestrians reported three-hour waits or even longer to cross into the United States. Among them was 17-year-old Omar Luna, a U.S. citizen who lives in Tijuana — but crossed Friday for his job at a fast-food restaurant in El Cajon. VOSD reached out to him after seeing a photo of the line that he posted on a Facebook page about border wait times. “It’s three hours in the sun, by the time you get there, you’re very tired,” Luna said. He usually takes an hour to cross by 5:30 a.m. for a morning shift, but on this day, he was working in the afternoon, and the line caught him by surprise.

Operated by San Diego’s Metropolitan Transit System, the Blue Line is familiar to many border crossers. The agency’s figures show that on an average weekday, more than 12,000 people board the line at San Ysidro. The agency “estimates the overwhelming majority are pedestrians who cross from Tijuana,” said spokesman Mark Olson.

But these pedestrian crossers are not the only potential source of cross-border trolley users. The idea is also to persuade a significant number of drivers to opt for the cross-border trolley — thus decreasing congestion and greenhouse gas emissions in the northbound car lanes. A company that specializes in transportation infrastructure, Cordoba responded to an invitation issued by SANDAG last November for innovative private-sector proposals.

The agency asked that the proposals focus on creating transportation connectors to ensure a system in San Diego County that is “faster, fairer and cleaner.” Of 18 submissions, Cordoba’s team was one three selected for funding and presented on Friday to the board of directors. All three teams in September will be invited to publicly present their refined concepts before a panel of experts. “And from there, we can decide whether we want to move forward with implementing any of these projects,” Meier said. By reaching out to the private sector in this way — a first for SANDAG — the hope is to generate some new ideas.

“The technology is advancing incredibly quickly, and we don’t want to assume we are the experts,” Meier said. “This allowed us to identify new technologies, new services, new business models, new ways of partnering that we probably wouldn’t have considered on our own.” In an interview last week, Cordoba staff sketched out some of their preliminary proposals, which are subject to change as the study progresses.

For now, the Tijuana terminal would be set on Avenida Revolucion and passengers would be charged $5 to $8. They estimate 2 million fare-paying passengers the first year, but predict demand would quickly double. “This will not be a costly system because we are all assuming that MTS is going to operate this. They already have the trains, they already have the infrastructure. So it’s really an extension of the same line by one mile,” said Conrado Ayala, Cordoba’s vice president for transportation infrastructure. Baja California’s government has also been looking at ways to streamline the border crossing.

Kurt Honold, the Secretary of Economy and Innovation, told VOSD earlier this year that the state is studying a proposal for a cross-border pedestrian tunnel that would connect Tijuana crossers with the Blue Line at San Ysidro. Cordoba has already been in touch with the state of Baja California, where officials “are very willing and interested in collaborating with us,” Jacqueline Reynoso, the company’s director of programs and policy. To move forward, a key first step will be securing a U.S. presidential permit necessary for any such cross-border project, Reynoso said.

When asked pedestrian crosser Luna about what he thought interest might be in a cross-border trolley connection, he did not hesitate to answer: If they build it, people will come. Maybe too many people, he said. “It sounds like a really good proposal, but they’d really have to think it through, because everybody would use it, do you understand?” he said. “It would also get full.”