LATEST FROM THE BRUSH OF MICHAEL WHEELDEN 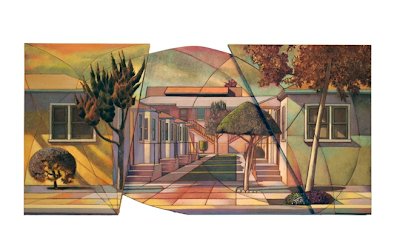 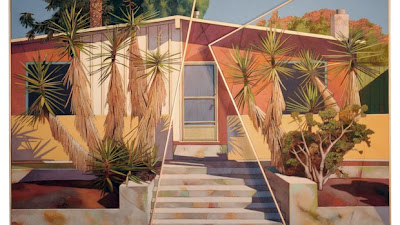 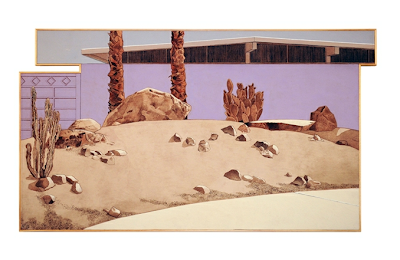 SAN DIEGO ARTIST--For about as long as he can remember, artist Michael Wheelden has painted houses.

“My dad built our first house, and that was when I was 3,” said Wheelden, looking at the paintings in his recently closed solo exhibition at the Pacific Beach Library. “I wasn’t that aware as a 3-year-old, but when I first wanted to paint, somehow, houses were on my mind.”

“I never realized it would be a lifelong journey,” Wheelden said. “It’s something where you look back on it and say, ‘Oh, that’s what I did.’ I didn’t project it that way into the future. I just painted what was interesting, compelling and meaningful to me. And then I realized my life had gone by.”

Wheelden, who was born in Ontario (California), has lived in San Diego since the ’70s and has taught at Grossmont College since the ’90s, agreed to talk about some of the most characteristic aspects of his art.

Those houses, which are evident in virtually every painting:

“The houses that I seem to gravitate toward in general are houses I feel most connected with, for instance, the houses I grew up in. … Their stucco surfaces lend themselves to large planes of color, and they are close to an almost geometric statement about a house.

“When you are a child, and someone says draw a house, and you draw a rectangle and a triangle, and two little windows and a door. Somehow, from that point you really get a sense of what a house is. A house like this, for instance (pointing to one of the paintings), is very, very simple, and yet it has all the meanings that we come to associate with houses.”

The angular lines and geometric shapes embedded into the paintings and often reflected in the frames:

The straight-on, single-point perspective he uses in his work:

“One of my favorite early Renaissance painters, Pierre de la Franchesca, sets up these scenarios and these scenes with this very simple and often symmetrical straight-on view. That had a real impact on me when I saw them in Italy. When I aligned myself with the Renaissance tradition and classicism, I wanted (my work) to have a classical underpinning.”

“My early work was very strongly colored, almost expressionist. It was still frontal, still architectural, but brighter. But in this suite of paintings, I wanted to calm them down a bit. I wanted them to be kind of washed in light, to be expressive of desert colors.”

Text and images are from Pacific Beach Public Library descriptive material for a recent Wheelden exhibition.

All acrylic on canvas on wood