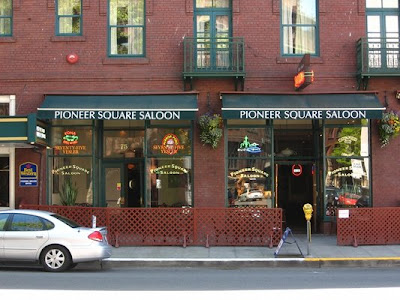 BREWIN’ WITH BIGFOOT—Beer lovers if you happen to be heading to Seattle any time soon there are plenty of sights to see and places to taste quality beer. One upcoming event will be a tough ticket, however because American Homebrewers Assn.’s 34th annual National Homebrew Competition (June 21-23) is sold out. Showing two things: home brewing is definitely hot and Seattle is very, very cool.

Even without the homebrew event, Seattle offers beer aficionados many other attractions. Most are in walking distance of the historic Pioneer Square area. The Best Western hotel at Pioneer Square is an historic refurbished lodging establishment that has modern amenities, but with a vintage appearance.

Best of all, at least to me, was the Pioneer Square Saloon (77 Yesler Way, 206-628-6444), right next door to the hotel (Western Ave. & Post Ave). The saloon only serves beer and wine, but oh boy, what beer they sell. There were several types of all kinds of micro brews, and even good old Pabst Blue Ribbon on tap. Something about the saloon’s motto that stuck with me: “Welcome to the Pioneer Square Saloon—Try not to be an asshole.” Definitely a locals bar (until this blog came out).

I was in the bar two of the three days we were there. On a Saturday the local professional soccer team had played. I don’t like soccer, don’t understand it, and think it’s boring to watch. I will concede the athletes are terrific and possess skills this broken down football and basketball player never had, even in my prime.

On that Saturday, the soccer fans were at the bar in full force wearing the replica jerseys of the local team (whose name I have forgotten). Alas, most of them were ignoring great Northwest craft beer (in the middle of Seattle’s Beer Week—for Pete’s sake) drinking Bud Light. There is no accounting for taste.

We saw the Space Needle (Big Deal). We saw the Pike Street Market which was a really neat place. It has tons of souvenir gifts, if you want one. The foodstuffs are out of this world. My favorites were a cheese shop where I had the best macaroni and cheese one could imagine. Okay, you might think if I have macaroni and cheese that I’m not very imaginative. You are wrong. This was great.

There is a Piroshky place that will have your mouths watering with every kind of filling that goes in a piroshky. Basically, you name it, and the Pike Street Market has it.

This is a buildup to my favorite spot in all of Seattle, the Pike Street Brewing Company. Like most brew houses they feature a half dozen of their own signature brews. Unless you know what you want, order the sampler. I used to say I was the Will Rogers of beer drinking—I’ve never met one I didn’t like. That’s no longer true. There are so many weird beers that I have had to draw the line.

There are pumpkin beers and other fruity beers that will make someone, but not me, happy.

The Pike Street Brewing Company (www.pikebrewing,com) has a rotating microbrew selection from over 100 breweries around the state from which to choose. They also have other German beers and a selection of rotating Northwest Artisan ciders. They also serve Washington white wines by the glass. Oh yes, the food is top notch, and it’s not just “bar food.” My wife was afraid it would be and I always love it when she’s wrong (about once a decade, if you ask her).

Along with the six regular microbrews always on tap there are beers made especially in the spring, winter, and summer.

Because I am a thirsty sponge for knowledge, I learned something at the brewing company. It’s probably common knowledge to most educated people, but I learned something about the scrapers used to get rid of the head of a glass of beer. I learned that the foam scrapers were done away with during Prohibition because the scraper is as ruinous to beer as a swizzle stick was in getting rid of the bubbles in Champagne.

Beer, properly poured, should have a head of one and half to two inches. The origin of this tidbit is unknown, but I believe it.

Note: A version of the blog recently ran in West Coaster. www.westcoastersd.om