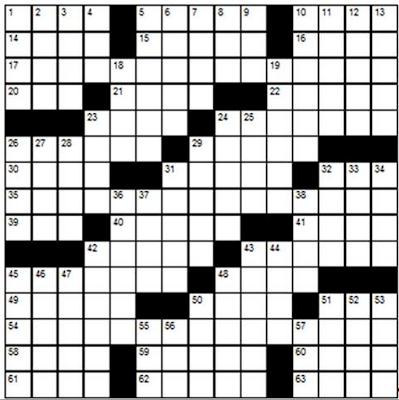 WOE TO THE EDITOR THAT DARES--Back when the earth was cooling, which was to many in my family the mid-1980s, I was employed as head of the editorial department at a local city magazine.  Given the lofty title of Executive Editor I made many day-to-day decisions.
But none was more dramatic than the staff meeting when I alerted underlings that the day of the monthly crossword puzzle in our city magazine was over.  My unilateral decision was backed with a question: why take up a full magazine page for something they can find just as easy in the daily newspaper?
Puzzled is an apt word for the firestorm of reader response wondering at the magazine’s sanity at deleting “their” crossword. “The crossword is the only reason I read your overstuffed advertising tree killer in the first place,” said one of the first to burn my ear over the phone.
Finger pointing was rampant in our small office.  I shielded my eyes.  And, it was folly to think that the tempest would pass.  I received less support than nestlings blown out of a tree during a gale. The publisher and owner of the magazine swiftly agreed with the readership. Thus, the crossword puzzle was marched off the scaffold and returned to its untouchable status for many years to come.
Irked by my rebuff, I avoided working crossword puzzles until well into my middle ages.  And, when I worked for other publications, I quickly guillotined all thoughts of adding crosswords to our pages.
It wasn’t until conventional wisdom--via the Internet--diagnosed that working crossword puzzles sharpens the mind and such honing can forestall memory loss.
I forgot where I read that.
Today, I did remember, is the 100th anniversary of the crossword puzzle.  Credit goes to a Liverpudlian named Arthur Wynne, who while living in America, came up with the idea.  The first “Word Cross” puzzle was published in the New York World newspaper a century ago, December 21, 1913.
It wasn’t until an ancient typo made by some unremembered soul in the newspaper composing room reversed the name and Crossword stuck to this day.
No record shows if that publishing mistake cost the person employment.
Evidently, that generation was much more kind to those who “mess” with “their” crossword puzzles in print.

For more on the history of the crossword puzzle link to:
http://www.crosswordtournament.com/more/wynne.html