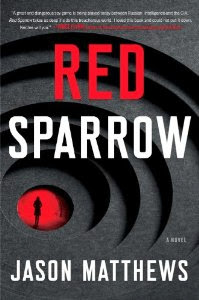 RED HOT--Gleaning through the Los Angeles Times on Sunday, there was a photo of President Obama with one of his daughters shopping at a Washington DC bookstore.  Most likely it was a photo-op to show White House solidarity with the recent Shop Small Business Day on Nov. 30.  What grabbed attention was one of the stack of books, Mr. Obama purchased was titled “Red Sparrow,” a spy thriller involving USA/USSR plot lines.  We’re told Vladimir Putin has a cameo in the book.

Amazon PR shows “Red Sparrow” is a first book for the name Jason Matthews and that in real life Mr. Matthews is or was a veteran CIA officer, which no doubt accounts for the hyped accuracy of the Langley, VA lingo.

I bought it used on Amazon for $8 with $4 more for shipping.  It will be my holiday read when it arrives.

In the meantime, here’s the Amazon propaganda in its unedited enthusiasm.   BTW, the first author recommendation comes from the late thriller writer Vince Flynn.  I hope it’s not his last words.  I hate to think any writer would like his last effort to be a PR blurb for a competitor.

“A great and dangerous spy-game is being played today between Russian intelligence and the CIA. Very few people know about it, but Jason Matthews does, and his thrilling Red Sparrow takes us deep inside this treacherous world. He’s an insider’s insider. And he is also a masterful storyteller. I loved this book and could not put it down. Neither will you.” —Vince Flynn

In the grand spy-tale tradition of John le Carré…comes this shocking thriller written with insider detail known only to a veteran CIA officer.

In present-day Russia, ruled by blue-eyed, unblinking President Vladimir Putin, Russian intelligence officer Dominika Egorova struggles to survive in the post-Soviet intelligence jungle. Ordered against her will to become a “Sparrow,” a trained seductress, Dominika is assigned to operate against Nathaniel Nash, a young CIA officer who handles the Agency’s most important Russian mole.

As the action careens between Russia, Finland, Greece, Italy, and the United States, Dominika and Nate soon collide in a duel of wills, tradecraft, and—inevitably—forbidden passion that threatens not just their lives but those of others as well. As secret allegiances are made and broken, Dominika and Nate’s game reaches a deadly crossroads. Soon one of them begins a dangerous double existence in a life-and-death operation that consumes intelligence agencies from Moscow to Washington, DC.

The New York Times review of “Red Sparrow” isn’t much different than what Amazon penned.  The Times did acknowledge Matthews is a 33-year veteran of the CIA.  Here’s a blurb from the NYT: “...What distinguishes “Red Sparrow” from so many of its ilk is not merely Matthews’s skill as a writer. He is smart and fluent, with a terrific ear for dialogue and a gift for quick, effective characterization. Here he describes a Russian spy chief:

‘“He looked to be 50 years old, with a red-veined tetrahedron for a nose. His eyes were dull and watery, his teeth corrugated and stained, and he slouched with the familiar casual authority honed on the razor strop of decades of Soviet officialdom. His tie was askew, his suit was a washed-out brown that recalled low tide at the beach.”’

USA TODAY reviewer said: “...Political diplomacy aside, we're talking about warring forces here, enemy combatants who may operate in the shadows, but who fill those shadows with torture, murder, and sexual exploitation. It's a frightening, ugly world in which to operate, full of necessary evils and uncomfortable decisions. Matthew maintains that tension right to the very last page, keeping the reader intrigued, almost to the point of paranoia...”