BUNGALOW GATEWAY 20 YEARS LATER--Today, at the intersections of 28th Street, Upas and Pershing Drive you find a neighborhood entry designation hailing North Park and its vibrant and historical collection of Arts & Crafts bungalows.

The landmark salutes the community leaders of North Park’s rebirth during the 1990s and early 2000’s and the neighborhoods historic past. In addition, the portal is a practical and artistic welcoming venue for those entering the historic neighborhood. 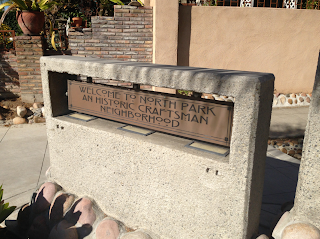 Many persons were involved in turning North Park from a nearly blighted area in the 1980s and 90s into the thriving “hip” community that many national publications call one of the cool neighborhoods in America.

The historic “Craftsman Historic Neighborhood” designation at 28th and Upas is one metaphor honoring all the residents who pitched in to spark the renaissance.

Three important leaders of the rebirth of North Park are the late Don and Karon Covington and neighbor Aida Mancillas, who both lived at the corner of 28th and Kalmia in a historic homes built by David Owen Dryden in 1916.

Don and Karon loved North Park and they were recognized nationally as the leading historians of the architectural arts & crafts genre in San Diego.  They were active in all aspects of community.  What they couldn’t do themselves they inspired others to jump in and help out.

Aida, along with partner Lynn Susholtz were tireless contributors to the historic and artistic fiber of the community.   Mancillas and Susholtz, while operating as Stone Paper Scissors public art design firm, created the blue prints for the modern day Vermont Street Bridge.

While many were involved in the implementation of the Pershing Portal Project street designation, including several generations of District 3 council staffs, all agree that honoring the Covington’s was more than apt.  There is a quote by Don Covington on a plaque placed in the sidewalk, which shows the insight of the Covington’s.

The sidewalk tablet reads:  “North Park is a vast open-air, living museum of historic houses and neighborhoods.  Those neighborhoods have miraculously preserved not only the whole gamut of early 20th century architectural styles, but also patters of traditional ways of living and relating to neighbors and to the natural environment.”
--Don Covington, October 1998 edition of North Park News.

Pershing Portal tablet also reads:  “The 3400, 3500 and 3600 blocks of Pershing and Twenty-Eighth Street form one of the earliest neighborhoods in North Park.  Most houses were built prior to World War I.  The years between 1912 and 1917 were the culminating years of the Craftsman Style in American domestic architecture.  Those years in North Park constituted the first period of residential development.”

HISTORY OF THE PERSHING PORTAL:
1986—Neighbors are concerned at the increased traffic accident rate at 28th & Upas, plus the constant flow of 40 mph plus speeders navigating narrow 28th Street.

1987-91—Neighbors along 28th Street begin lobbying City Hall to do something about the speeding up and down 28th Street (the small street was a convenient short cut for drivers to transition from Pershing Drive to University Ave).  Unfortunately, too many speeders didn’t adhere to common sense speed limits in the residential neighborhood.  Without the high number of speeders most likely the street would never have been closed or the Pershing Portal have the quality appearance it has today.

1992—The ad hoc 28th Street Action group is formed, a collection of 40 or more residents organized a week long, 18-hour per day traffic watch to prove to the city the sheer numbers of speeders using 28th Street.  The Action Group met regularly at the home of Tom and Phyllis Shess, who launched North Park News shortly thereafter.  Attendees at the meeting included Councilmembers John Hartley and then later Christine Kehoe and members of their staffs.

1993—The City acts on neighbor petitions and closes 28th Street at Upas with temporary cement barriers.  The closure created a cul de sac on 28th Street that exists today.

1995—Conceptual designs for the Pershing Portal project began under the guidance of many, especially 28th Street residents Aida Mancillas and Lynn Susholtz of the public art design firm of Stone Paper Scissors.  Funding would take another eight years.

To date—Many residents have volunteered over the years to maintain the quality of the landscaping by watering and weeding.  To them, especially Sheryl Hauser and family, we are forever grateful.

FOR THE RECORD
From the June, 1993 edition of North Park News:

“Neighbors Sour on Speeders; Petition City for Cul de Sac”
“We simply got tired of drivers who don’t live in the neighborhood using 28th Street as a freeway ramp between University and Pershing,” said Phyllis Shess, attorney and homeowner.  “Also, 28th Street is one of the narrowest streets in North Park and no one has the right to drive 50 mph on any neighborhood street,” she added.
Like most of North Park, 28th Street is made up mostly of young families or elderly.  “We had a traffic monitoring device in place last summer (1992) and still people drove by at 40 to 50 mph.  They’re just oblivious,” added Della Creelman, another homeowner.
Fellow homeowners on 28th Street, led by Shess, Creelman and others created the 28th Street Action Group.  After several block meetings the group collected enough homeowner signatures to qualify for closing off 28th Street at Upas.
Sid Pazargadi, a City traffic engineer pointed out “the group is operating within the system.  They collected signatures of 80 percent of the residents on that stretch of 28th Street.  They will receive their cul de sac June 2 (1993).
Pazargadi also said a traditional cul de sac would not be created.  Instead, the street would be closed with a series of metal posts accented by flowers.  The post system allows emergency vehicles to use the street if necessary.
Creelman, who has had a daughter hit and seriously injured by a driver on 28th Street, said the residents are tired at shouting to speeders to slow down.  “We wanted to do this before someone is killed.”
The residents gained final approval from the North Park Planning Committee and the City Council.  Following several neighborhood meetings both the North Park Community Assn. and the North Park Business Assn., endorsed the residents’ petition.