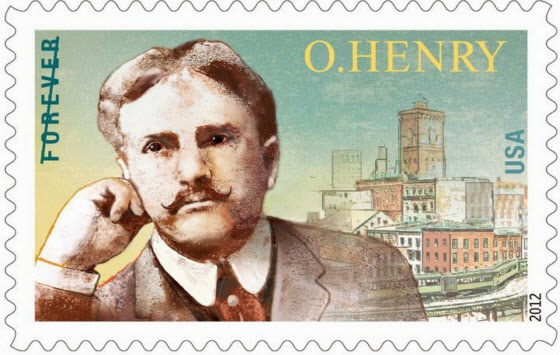 FICTION FROM THE PUBLIC DOMAIN.
Text Courtesy of www.gutenberg.org

Editor’s Note: This short story led off the last collection [1919] of O.Henry’s works and was titled “Rolling Stones,”the latter was the title of an O.Henry literary publication in Austin, Texas founded in 1895.

This was the last work of O. Henry. The Cosmopolitan Magazine had ordered it from him and, after his death, the unfinished manuscript was found in his room, on his dusty desk. The story as it here appears was published in the Cosmopolitan for September 1910.

Both psychology and science grope when they would explain to us the strange adventures of our immaterial selves when wandering in the realm of "Death's twin brother, Sleep." This story will not attempt to be illuminative; it is no more than a record of Murray's dream. One of the most puzzling phases of that strange waking sleep is that dreams which seem to cover months or even years may take place within a few seconds or minutes.

Murray was waiting in his cell in the ward of the condemned. An electric arc light in the ceiling of the corridor shone brightly upon his table. On a sheet of white paper an ant crawled wildly here and there as Murray blocked its way with an envelope. The electrocution was set for eight o'clock in the evening. Murray smiled at the antics of the wisest of insects.

There were seven other condemned men in the chamber. Since he had been there Murray had seen three taken out to their fate; one gone mad and fighting like a wolf caught in a trap; one, no less mad, offering up a sanctimonious lip-service to Heaven; the third, a weakling, collapsed and strapped to a board. He wondered with what credit to himself his own heart, foot, and face would meet his punishment; for this was his evening. He thought it must be nearly eight o'clock.

Opposite his own in the two rows of cells was the cage of Bonifacio, the Sicilian slayer of his betrothed and of two officers who came to arrest him. With him Murray had played checkers many a long hour, each calling his move to his unseen opponent across the corridor.

"All right, Bonifacio," said Murray steadily, as he allowed the ant to crawl upon the envelope and then dumped it gently on the stone floor.

Bonifacio's hardened philosophy, followed closely by his deafening, musical peal of laughter, warmed rather than chilled Murray's numbed heart. Yet, Bonifacio had until next week to live.

The cell-dwellers heard the familiar, loud click of the steel bolts as the door at the end of the corridor was opened. Three men came to Murray's cell and unlocked it. Two were prison guards; the other was "Len"—no; that was in the old days; now the Reverend Leonard Winston, a friend and neighbor from their barefoot days.

"I got them to let me take the prison chaplain's place," he said, as he gave Murray's hand one short, strong grip. In his left hand he held a small Bible, with his forefinger marking a page.

Murray smiled slightly and arranged two or three books and some penholders orderly on his small table. He would have spoken, but no appropriate words seemed to present themselves to his mind.

The prisoners had christened this cellhouse, eighty feet long, twenty-eight feet wide, Limbo Lane. The regular guard of Limbo Lane, an immense, rough, kindly man, drew a pint bottle of whiskey from his pocket and offered it to Murray, saying:

"It's the regular thing, you know. All has it who feel like they need a bracer. No danger of it becoming a habit with 'em, you see."

Murray drank deep into the bottle.

"That's the boy!" said the guard. "Just a little nerve tonic, and everything goes smooth as silk."

They stepped into the corridor, and each one of the doomed seven knew. Limbo Lane is a world on the outside of the world; but it had learned, when deprived of one or more of the five senses, to make another sense supply the deficiency. Each one knew that it was nearly eight, and that Murray was to go to the chair at eight. There is also in the many Limbo Lanes an aristocracy of crime. The man who kills in the open, who beats his enemy or pursuer down, flushed by the primitive emotions and the ardor of combat, holds in contempt the human rat, the spider, and the snake.

So, of the seven condemned only three called their farewells to Murray as he marched down the corridor between the two guards—Bonifacio, Marvin, who had killed a guard while trying to escape from the prison, and Bassett, the train-robber, who was driven to it because the express-messenger wouldn't raise his hands when ordered to do so. The remaining four smoldered, silent, in their cells, no doubt feeling their social ostracism in Limbo Lane society more keenly than they did the memory of their less picturesque offences against the law.

Murray wondered at his own calmness and nearly indifference. In the execution room were about twenty men, a congregation made up of prison officers, newspaper reporters, and lookers-on who had succeeded

Editor’s Note: Here, in the very middle of a sentence, the hand of Death interrupted the telling of O. Henry's last story. He had planned to make this story different from his others, the beginning of a new series in a style he had not previously attempted. "I want to show the public," he said, "that I can write something new—new for me, I mean—a story without slang, a straightforward dramatic plot treated in a way that will come nearer my idea of real story-writing."

Before starting to write the present story, he outlined briefly how he intended to develop it: Murray, the criminal accused and convicted of the brutal murder of his sweetheart—a murder prompted by jealous rage—at first faces the death penalty, calm, and, to all outward appearances, indifferent to his fate.

As he nears the electric chair he is overcome by a revulsion of feeling. He is left dazed, stupefied, stunned. The entire scene in the death-chamber—the witnesses, the spectators, the preparations for execution—become unreal to him. The thought flashes through his brain that a terrible mistake is being made. Why is he being strapped to the chair? What has he done? What crime has he committed? In the few moments while the straps are being adjusted a vision comes to him.

He dreams a dream. He sees a little country cottage, bright, sun-lit, nestling in a bower of flowers. A woman is there, and a little child. He speaks with them and finds that they are his wife, his child—and the cottage their home. So, after all, it is a mistake. Some one has frightfully, irretrievably blundered. The accusation, the trial, the conviction, the sentence to death in the electric chair—all a dream.

He takes his wife in his arms and kisses the child. Yes, here is happiness. It was a dream. Then—at a sign from the prison warden the fatal current is turned on.

Murray had dreamed the wrong dream.