BELGIAN BREWER’S PIPE DREAM COMES TRUE.
In 1915 San Diego, a tunnel under Washington Street (just West of I-5) in Middletown, was built by Mission Brewery (no relation to the 2016 suds maker of the same name) to carry full barrels of beer from the brewery operation (northside of Washington St.) to the distribution building on the southside of the street.

That small San Diego distribution tunnel pales in comparison to a two-mile pipeline that will be unveiled in Bruges, Belgium this August.

The new Euro pipeline constructed of sanitary high density polyethylene plastic will be used to river high quality Belgian made beer from an ancient brewhouse in the middle of the oldest part of Bruges to a bottling plant two-miles away. 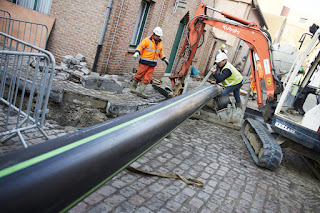 The idea for the beer pipeline came from brewery scion Xavier Vanneste, whose family founded De Halve Maan Brewery in 1856.  Part crazy and part practical the tunnel was approved by Bruges City Hall because it eliminated the need for beer trucks to clog the heart of the oldest, narrowest cobblestoned part of the city.  Fewer trucks also means less smog and fewer traffic jams.

Vanneste’s maternal grand ancestors, The Maes Family, have been brewing beer on the Walplein in Bruges for parts of three centuries. 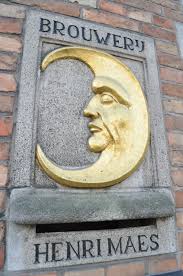 A few years ago, Vanneste appealed to Kickstarter for his pipeline idea and garnered more than $300,000.  The brewery operation, which he heads, added the rest of the $4.5 million pipeline cost.  The line is geared to pump more than 1,000 gallons of beer per hour if needed.

The brewery in Bruges goes back even farther in time.  Records in the town registry show in 1564, there was downtown brewery called “Die Maene”  on the same site as the one purchased by the Maes family in 1856.

Today, De Halve Maan has a modern tavern in a part of town that is as old as the hills.  There lunch crowds and beer lovers from all corners of the round planet gather to enjoy a meal (inside or on the terrace) with views of nearby canals, cozy fireplaces or the establishment’s state of the art brewing house.

Lunch is served every day from 12 pm until 3 pm.

Great Articles:
--On May 30, 2016 Wired Magazine published an article on the beer pipeline by Aarian Marshal that goes into detail regarding the beer pipeline from idea completion and mentions all the bureaucratic wrangling in between.
https://www.wired.com/2016/05/bruges-built-underground-beer-pipeline-improve-traffic/