WANT TO REALLY GET AWAY THIS SUMMER? / ANTIPODE ISLANDS


To date, the Antipode Islands are a perfect getaway spot if you bring your own resort and other necessities of life such as craft beer and a café with wifi and a decent take out menu.   And, the only way to get there is to sail or parachute.  Airport designers have yet to be born and tourist boards ask the source question “why on Earth would you want to go there?” That is if there was a there, there. 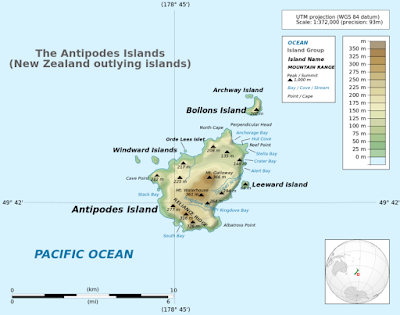 Nonetheless, this blog ventured off on an Internet visit of the island.  For the sake of full disclosure, UNESCO disagrees with this blog’s assessment of the Antipodes as being desolate and devoid of interest to mankind. The islands are proudly etched on UNESCO’S list of World Heritage List.  So, what do we know?

But first let’s play some history music. In March, 1800, an adventurous sea captain named Henry Waterhouse, who commanded the H.M.S. Reliance, was the first to chart a group of volcanic islands in the sub Antarctic Indian Ocean that to this day are among the most remote and unvisited volcanic islands on the planet.  The Royal Navy designated the Reliance, built in 1793, as a ship of discovery and exploration. 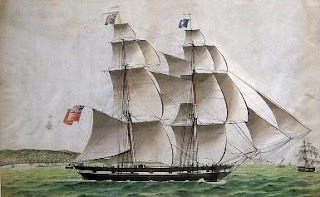 Captain Waterhouse named the islands Pentantipodes, which over time has been shortened to Antipodes.  Main Antipodes Island and its nearby sister island Bollons are governed by New Zealand and are considered the first lands to see the new day.  The main Antipode island is a harborless series of steep basalt cliffs covering five miles by three miles.  Mt. Galloway is the highest point on the island at 1,300 feet. Reportedly, there is a small lake near the peak.

Generally uninhabited except by rodents and adventurers and Marine scientists, many of which are associated with the island’s recently established (2014) Antipodes Island/Moutere Mahue Marine Reserve.  Otherwise the island belongs to birds, lush vegetation and occasional adventurers, who own rubber boats.

Reason for the thriving plant life is and abundance of fresh water (rain) and the lack of small burrowing mammals.  Of the 71 known plants, scientists point out only 3 are non-native.  Birds range from snipes, petrels, parakeets (who eat meat) and wandering Albatross.  Penguins are flourishing and have established an embassy on the island and relatives of distant seal species are back and this time protected by the Marine Reserve.

Scenic basalt cliffs, some 500 feet tall, offer evidence of its volcanic past, but it is unknown when the island’s volcano was last active.

The island is a leading exporter of rough seas and high winds throughout the Indian Ocean. Even the most interesting man in the world won't visit here.

Sadly, Antipode Island has a dark past (just ask ancestors of local elephant seals).  Many colonies of seals thrived on the Island until international fur trappers decimated the seal population between 1804 and 1830s.  The American sealers did most of the damage killing 60,000 seals in one year.  But didn’t we look splendid during the 1800s in those waterproof sealskin boots and coats?  Thank you, very much cap flap fashionistas of the day.

Getting back to Captain Waterhouse by what reason did he arrive at the name for the newly discovered islands?  Certainly in 1800 lots of names were still available such as Coney Island, Alcatraz and/or Thousand Island.

Our friends at Wikipedia unearthed the heritage of the name and we repeat that nugget here.  The name Antipodes (nee Pentantipodes) is derived from the British concept that if you drew a line from London directly through the center of the Earth the line would emerge very near Antipodes Island.  Hence the name.

Oh, did we mention the storms and high winds?