GUEST BLOG / By CNN—President Trump’s upbeat attitude did not reflect the inherent severity of the situation. It remains extremely rare for a president to overnight in hospital, given the extensive medical facilities available at the White House.

Trump himself was said to be spooked after he announced he tested positive early Friday, and has become increasingly alarmed by his diagnosis as he developed symptoms like a fever overnight, according to a person familiar with his reaction.

A Trump adviser said there is reason for concern about the President's health. "This is serious," the adviser said. The adviser went on to describe Trump as very tired, very fatigued and having some trouble breathing. A source familiar with the situation said White House officials have serious concerns about Trump's health and a top administration official told CNN that Trump is "OK for now, but our fear is that things can change quick."

The official acknowledged that Trump is dealing with some symptoms of the virus and is "fatigued." But, according to the official, the is taking the situation "very seriously," the official added. The White House had continued to insist the President "remains in good spirits, has mild symptoms, and has been working throughout the day" in the hours before he traveled to Walter Reed.

"Out of an abundance of caution, and at the recommendation of his physician and medical experts, the President will be working from the presidential offices at Walter Reed for the next few days," press secretary Kayleigh McEnany said. "President Trump appreciates the outpouring of support for both he and the First Lady."

An administration official said Pence was working from his residence at the Naval Observatory and remains in good health. Trump has had a fever since Friday morning, a person familiar with the matter said, though an official said the fever remains consistent with the White House's description of "mild symptoms." Earlier in the afternoon, Trump's physician wrote in a memo he "remains fatigued but in good spirits."

"He's being evaluated by a team of experts, and together we'll be making recommendations to the President and First Lady in regards to next best steps," Navy Commander Dr. Sean Conley wrote. He said Trump had been administered a Regeneron polyclonal antibody cocktail and has been taking zinc, vitamin D, famotidine, melatonin and a daily aspirin.

The decision to give Trump an experimental monoclonal antibody cocktail illustrates how concerned the White House may be about his Covid-19 diagnosis, Dr. Jonathan Reiner, CNN medical analyst and professor at George Washington University, told CNN on Friday. "The big news there is that he got an experimental drug. He got a drug not approved by the FDA," said Reiner, who has treated former Vice President Dick Cheney.

The memo also said Melania Trump remains well with only a mild cough and headache, and the remainder of the first family is well and have tested negative. For the CNN article Click Here. 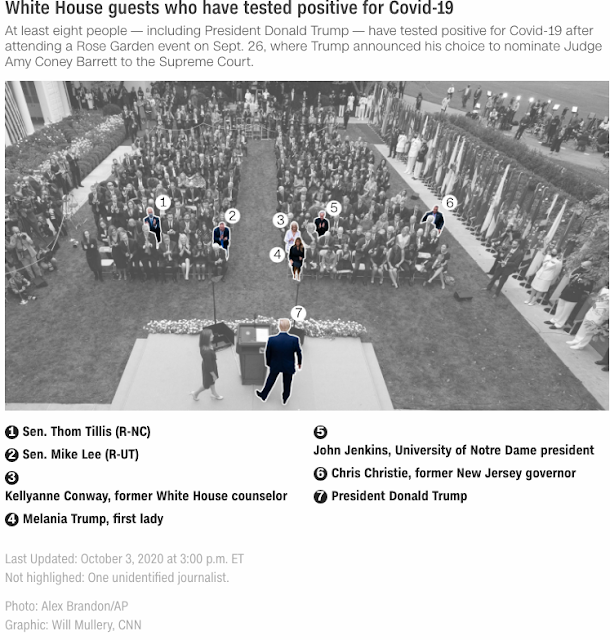