THE WEST / A SHOT OF COURAGE 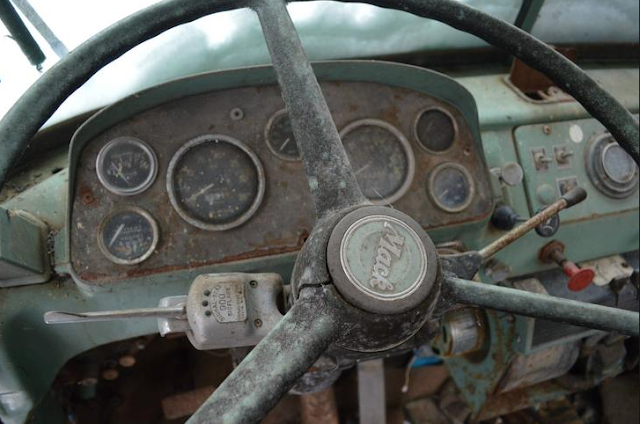 Here’s a bit of Americana that if it weren’t for the Internet would have been lost to the ages.

GUEST BLOG / By Welda McKinley Grider--The old Mack truck sits deserted in the graveyard of old vehicles by the corrals. Somehow, you can’t get rid of anything that was part of the family for four or more decades.

It had an infamous air horn that went ah-oogh-gah and could be heard for miles. This was not a truck for sissies to drive—you had to keep both hands on the steering wheel to keep from being shook out the window.

In my mind, I can hear it. We could hear my father pull off the highway on his way home. That was a loud, rough old truck. It had a 4 x 4 tranny in it, and you had to hook your arm through the steering wheel and change gears with both hands.

The old Mack truck is two years older than I am, and I believe it is one of the few things in worse shape.

I doubt my father bought the truck new, but it went a lot of miles hauling cattle. Atop the radiator was the Mack mascot, a bulldog leaning forward as far as he could. Our ranch hand Harold was bringing a load of cattle down the hill from Scholle on US 60) to Belen (on the Rio Grande), when the old truck drove into a blinding snowstorm.

The highway turned to ice and he barely crawled along. Harold was afraid of three things and icy roads was one of them. We always laughed at how slow Harold could drive in bad weather and still be moving. He said the old dawg (hood ornament) was sitting on his haunches and had his paws over his eyes because he couldn’t stand to see what would happen next. From time to time old dawg would peek through his paws then shake his head and cover his eyes again.

It continued to snow and Harold continued to make a 30 minute drive stretch into an hour and a half. Halfway down the hill was a knuckle-skinning bar run by a family of pin heads, but the beer was cold, the whiskey poured and Harold knew the wood stove would be burning.

Harold vowed that if he made it to the aforementioned Blue Springs Bar, he’d have himself a shot of courage. He did arrive and went inside to warm up. He listened to the juke-box and watched a couple of games of pool. But he still had a truckload of cattle to deliver in a snow storm, so he sadly left a perfectly good warm bar and went outside into the snow, taking his drink with him.

He said he was looking down the hill gathering courage and sipping on his drink. He’d slosh a little over the old dawg for good luck. “A little for me, and a little for you,” until he finished his drink and gathered what courage there was to be found. He climbed in the truck to finish the night’s work. He said that the shot of whiskey really helped him because the old dawg laughed, leaned forward as far as he could and would look over his shoulder and wave him on in a motion that said come on, come on. This story does not amuse my father because Harold left the air brakes on.

Welda McKinley Grider, is a Lincoln County, New Mexico native and rancher. She is a writer, who also penned “Reasons Not to Assault a Ranch Woman,” which was published in Range Magazine, 2008. To read it click here.  BTW: Award winning Range Magazine is still publishing (we never doubted they wouldn’t be). Click here.