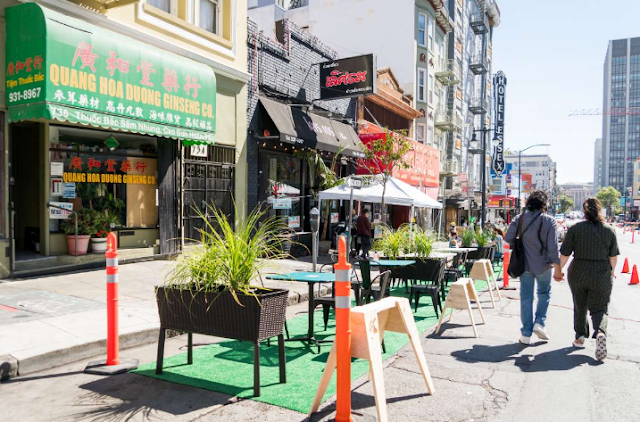 Back in the day as a younger editor in chief of San Francisco Magazine, the Tenderloin district downtown was far from a haute spot of cuisine.

But pandemics have a way of changing attitudes.

GUEST BLOG / By Dianne de Guzman, Writer, SF Gate—Tenderloin outdoor dining draws locals to the neighborhood for food, shopping. A mellow beat boomed over speakers set up outside on Larkin Street on a recent San Francisco Saturday afternoon, as locals descended on the area to dine and shop during Tenderloin Outdoor Dining.

Running Thursdays through Sundays, from 12 - 7 p.m., Larkin Street will be closed to traffic between Eddy and O'Farrell streets to encourage residents to patronize the restaurants and shops of the area.

It was a project that was months in the making that finally began on Sept. 24, and initially inspired by similar efforts to shut down streets for outdoor dining in the North Beach area for Shared Spaces, said Rene Colorado, executive director for the Tenderloin Merchants Association, told SFGATE. "I started planning this, but unfortunately, you know, because of the challenges in the Tenderloin, everything we have to deal with, it really took a long time," said Colorado.

"[We had] three or four months of planning, now it came to fruition and it was really to try to save the restaurants - and a byproduct to that, we're saving the neighborhood, basically." In conjunction with other organizations such as Livable City, Tenderloin Community Benefits District, Supervisor Matt Haney's office and others, Colorado and others were onsite during the event's opening weekend, making sure things ran smoothly and serving as ambassadors to the public who were stopping through for the event.

Diners sat at outdoor tables on the closed street, enjoying the food at Lers Ros Thai, Turtle Tower, Pho 2000 and other restaurants participating in the event. Others looked through racks of clothing stationed outside of vintage shop, Vacation, and clothing store Tilted Brim while a DJ nearby spun tunes. Here's a look at Tenderloin Outdoor Dining in its first weekend. For more information click here: www.tloutdoordining.com.