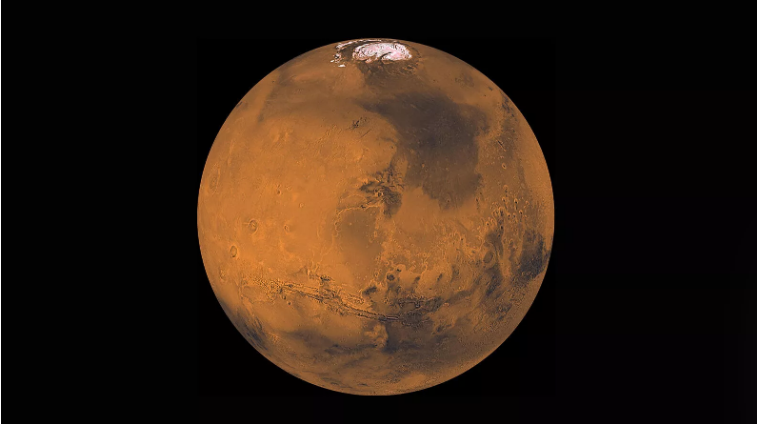 GUEST BLOG / By NASA—See Mars closest approach to Earth right now. Simply go outside and look up and, depending on your local weather and lighting conditions, you should be able to see Mars.

That is the point in Mars' orbit when it comes closest to Earth, this time at about 38.6 million miles (62.07 million kilometers) from our planet. Mars was visible for much of the night in the southern sky and at its highest point at about midnight.

Mars will still be visible through October, but will become fainter as Mars and Earth travel farther away from each other in their orbits around the Sun. 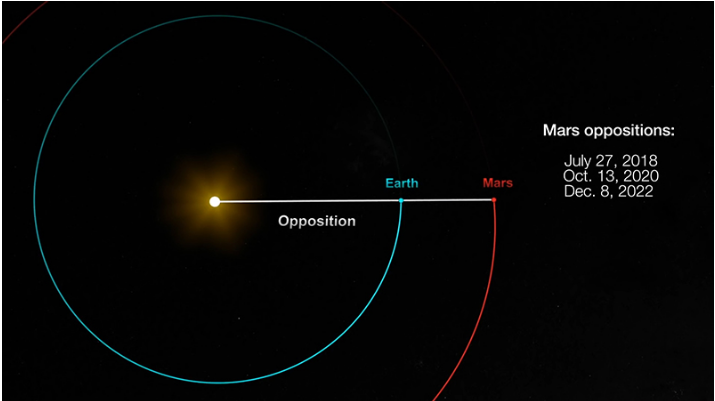 This time of excellent Mars viewing coincides with opposition, when Mars is directly on the opposite side of Earth from the Sun.

This lineup happens about every two years. During this opposition, Mars and Earth are closest to each other in their orbits. That means Mars is at its brightest, so go out and take a look! NASA's Mars 2020 mission, with its Perseverance rover, is currently en route to the Red Planet, with a landing scheduled for Feb. 18, 2021.

Several other nations also have spacecraft headed to Mars. What is Mars Close Approach? Close Approach is when Mars and Earth come nearest to each other in their orbits around the sun.

Close is a relative term.

The minimum distance from Earth to Mars is about 33.9 million miles (54.6 million kilometers). However, that doesn't happen very often.  If Earth and Mars had perfectly circular orbits, their minimum distance would always be the same. However, they have elliptical (egg-shaped) paths. In addition, gravitational tugging by planets constantly changes the shape of their orbits a little bit. Giant Jupiter especially influences the orbit of Mars.

The orbits of Mars and Earth are also slightly tilted with respect to each other. All of these factors mean that not all close encounters are equal. In 2003, Mars made its closest approach to Earth in nearly 60,000 years! It won't be that close again until the year 2287. When Mars and Earth are close to each other, Mars appears very bright in our sky.

It also makes it easier to see with telescopes or the naked eye. The Red Planet comes close enough for exceptional viewing only once or twice every 15 or 17 years.

When does Mars Close Approach Occur? Though Earthlings will be able to get a good look at Mars during close approach, NASA's Curiosity rover and Insight lander on Mars will not be able to see Earth. Mars Close Approach happens about every 26 months. It is closely related to Mars Opposition and Mars Retrograde. Since Mars and Earth are at their closest, it's generally the best time to go to Mars. Many Mars missions have taken advantage of the close distance to visit the red planet. That's why, depending on budgets, you'll often see that Mars missions launch about every two years.

Meanwhile we'll just have to view Mars thanks to imbedded robots now on the Red Planet. (see below).