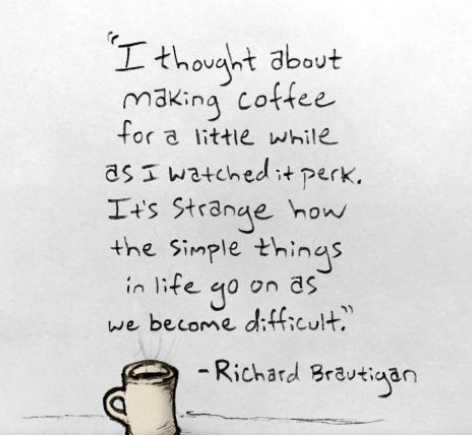 The coffee quote in the above headline (not the image) appears in poet Richard Brautigan’s work “Loading Mercury with a Pitchfork.”

A few examples from both sources above:

“...Janie went down and the landlady made her drink some coffee with her because she said her husband was dead and it was bad to be having your morning coffee by yourself...” --From “Their Eyes Were Watching God” by Zora Neale Hurston.

“...It is inhumane, in my opinion, to force people who have a genuine medical need for coffee to wait in line behind people who apparently view it as some kind of recreational activity...” --From newspaper columnist and author Dave Barry

He wants to be alert!

The coffee doesn't make him restless - it only awakens him to his true feelings.

Thus coffee is a truth serum!

Coffee lifts the veil of self-delusion...”

--From “The Russian Debutante’s Handbook” by Gary Shteyngart

"...That’s something that annoys the hell out of me—I mean if somebody says the coffee’s all ready and it isn’t...”

“...Mornings the barber left his stylists inside and sat outside of his ship drinking coffee and ogling every woman in sight...”

--From The Barber's Unhappiness,” a short story by George Saunders from his collection “Pastoralia.”