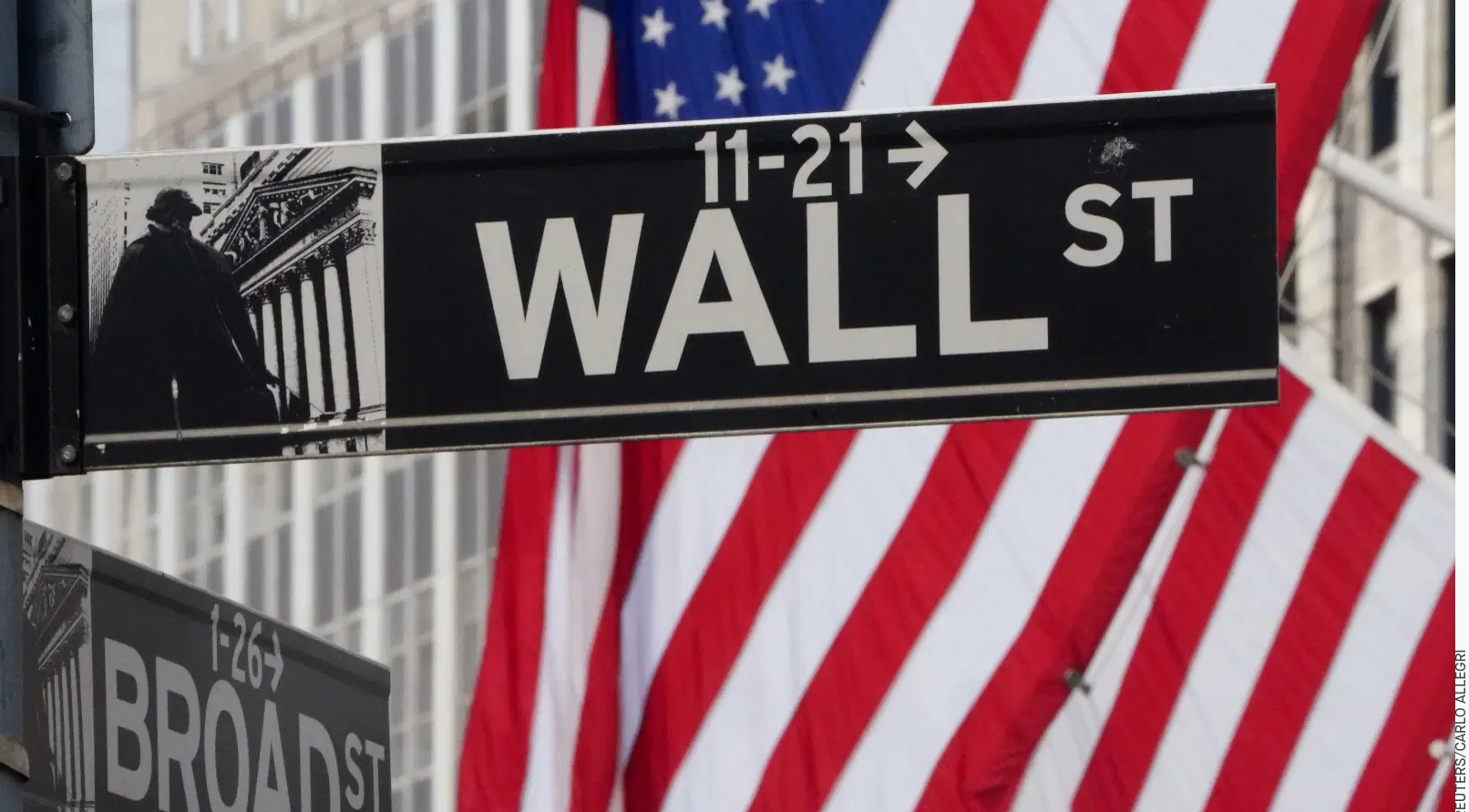 Editor’s Note: As Edward Jones is the financial advisor of this daily online publication, permission has been granted to pillartopost.org [p2p] to republish certain data to our readership.

The U.S. has continued its vaccination effort, with over 1 million people receiving the first dose of the new vaccine. The president has cast doubt over the passage of the new relief bill, but we think it is likely to pass because it contains key funding for vaccine distribution. Consumer confidence has seen a short-term dip, and weekly jobless claims rose unexpectedly, pointing to continued strain from economic restrictions across the country.

A Look Back at an Unprecedented Year The year 2020 will go down in history as one of the most memorable and unpredictable years of our lives. The pandemic and resulting health crisis upended everyone, creating unique challenges for individuals, businesses and governments. From a financial-markets perspective, 2020 was a year of unprecedented change but eventual resiliency.

As governments imposed strict lockdowns to buy time for the health care systems that were threatened to be overwhelmed, the economy plunged into a deep self-induced recession. However, swift and aggressive policy support helped prevent this health crisis from evolving into a prolonged, full-blown financial crisis. With a week left to go in the year, the light at end of the tunnel is brighter as a result of the medical breakthroughs around vaccine development. Major market indexes are trading near record highs, reflecting a positive 2021 outlook, an outcome that was hard to envision during the early days of the pandemic.

While it is tempting to want to forget this year, the change of the calendar presents an opportunity to reflect and review some of the milestones of 2020. The real estate on this page is not enough to capture all the incredible developments, but below are 10 highlights (good and bad) that defined the economy and the markets over the past 12 months, along with the five investing lessons they offer. 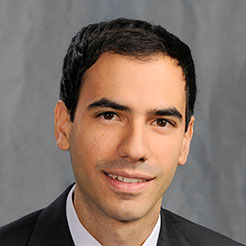 Andrew Kourkafas,
CFA Analyst
Edward Jones Company
From bull to bear to bull in a blink of an eye

The unique, sudden recession produced the fastest bear market in history, with the S&P 500 declining 34% from all-time highs in just 23 days. For perspective, historical 35% declines took an average of 11 months to materialize1. On the flipside, the market's ascent to new highs in August marked the fastest recovery from a bear market on record, materializing in just four months, compared with the historical average of a little over four years1. Last week's nine-month anniversary since the March 23 bottom finds the S&P 500 65% higher and up 15% year-to-date.

The U.S. economy experienced the worst quarterly contraction on record in the second quarter (-31% annualized), four times larger than the worst quarter during the '08/'09 financial crisis. Unlike most past recessions, the shrinking of the economy was driven by a sharp decline in consumer spending, as consumers were unable to spend under stay-at-home orders. The subsequent reopening of the economy resulted in the largest rise in output in the third quarter (33% annualized). These wild swings in GDP are a reminder that the U.S. is a service- and consumer-driven economy, making trends in the labor market and household balance sheets critical to monitor.

By April the number of laid-off and furloughed workers rose to 22 million, erasing all the net new jobs created since March of 20091. Unemployment went from a 50-year low (3.5%) in February to the highest level since the Great Depression (14.7%), surpassing the previous high in 1982. Since then, with restrictions partially lifted, we have seen solid improvement, with a little more than half the losses being made back. But the current unemployment rate remains elevated.

Fed to the rescue

A large part of the rebound in financial assets can be credited to the Federal Reserve's swift actions aimed at providing liquidity and funding to consumers and businesses. Very early in the downturn the Fed was quick to drop policy rates to zero and use its full range of tools, including bond-buying programs, liquidity injections and credit facilities. For context, the Fed grew its balance sheet by over $3 trillion over the course of four months, a similar amount to what was added during the financial crisis in '08/'09 over the course of four years. Using Chairman Powell's words, the Fed is "not even thinking about raising rates," which strongly suggests that rates and credit costs will stay low for at least a couple of years, facilitating the expansion and providing a backstop for the market.

On March 9 the yield on the benchmark 10-year Treasury briefly touched a historic low of 0.32% in overnight trading as investors sought the safety of government bonds.

Concurrently, the 30-year Treasury yield dropped below the 1% threshold for the first time in history. As central banks around the world cut rates aggressively in response to the crisis, negative-yielding debt reached a record of $18 trillion, further boosting the appeal of stocks relative to bonds. As intended, households were able to benefit from the low-interest-rate environment.

The average rate on a 30-year fixed mortgage dropped below 3%, giving homeowners an opening to refinance their loans and providing a boost to the housing market.

Oil prices briefly fell into negative territory (-$37) in April for the first time in history. This unprecedented event was a result of technical selling pressure before the futures-contract expiration, as well as the limited storage space brought on by the historic lack of demand. As storage tanks filled up because airlines and other buyers were not using as much oil as before the crisis, futures contracts sold off sharply, as sellers were willing to pay buyers to take the oil off their hands.

With central banks having lending powers and no spending powers, governments are shouldering the burden of bridging the income and employment gaps until the economic effects of the pandemic fade. Congress passed the CARES act in March, allocating $2.2 trillion dollars to businesses and consumers in the form of direct payments to families, expanded unemployment benefits, and loans to corporations, small businesses, and state and local governments. The boost to income by government transfers, along with the inability of consumers to spend during lockdowns, resulted in an unprecedented surge in personal savings and a rise in personal income. Fiscal support is expected to continue to grow, and it currently accounts for 16% of GDP (the highest level since 1945).

A V- or K-shaped recovery? Altogether the economy rebounded sharply from its second-quarter bottom. The sudden nature of the recession and pent-up demand produced a V-shaped recovery. However, a closer look reveals that the recovery was uneven across industries as well as demographic groups.

While certain industries and sectors, like technology, benefited from the pandemic, others, like airlines, hotels and restaurants, were disproportionately impacted. Two-thirds of the job losses at the height of the recession were in those vulnerable industries that rely on social contact. Also, small businesses, which employ roughly half of the U.S. labor force, continue to struggle.

Up until the first half of the year market leadership was becoming very concentrated at the top, as growth-style investments and technology stocks benefited from the "stay-at-home" trends. By July the largest five stocks in the S&P 500 (Microsoft, Apple, Amazon, Facebook and Google) accounted for about 23% of the index and were up 30% on average by that point, versus the average of the remaining 495 stocks in the index, which were down about 10%1. Signs of a durable recovery during the summer months, and later positive vaccine developments, triggered investor interest in other asset classes, sectors and investment styles.

November was the best month on record for small-cap stocks, and on the day of the Pfizer vaccine announcement, value-style (dividend income) investments had their single best day over growth-style investments.

The S&P 500 has logged 30 fresh record highs in 2020, 17 of them recorded after the late-February pandemic-induced bear market. Investing Lessons From 2020 Even in a year that challenged the norm, some of our time-tested core investing principles proved to be a useful guide in navigating uncertainty. Below are five key takeaways/lessons learned from the 2020 crisis.

Even in this unusually short but sharp recession and bear market, aligning decisions with goals for the long term rather than headlines helped investors keep a level head.

The power of a disciplined approach

Systematic investing and rebalancing helped investors navigate volatility this year without having to "time" the market. The sharp sell-off in stocks caused the equity portion of portfolios to be below the intended allocation weight. A 60/40 equity/bond portfolio in February would have drifted to a 50/50 weight mix by March. Trimming overweight investments and reallocating to underrepresented areas over the course of the year not only helped investors boost their equity exposure at depressed prices, but also helped position portfolios for the recent change in market leadership towards economically sensitive investments.

The VIX, a measure of market volatility often called the "fear index," reached a new record high in March, surpassing the levels seen during the Great Financial Crisis. While distressing for investors, extreme volatility has not historically lasted for a very long time and has been followed by strong forward returns. This also proved to be the case this time around regardless of the unique trigger of the crisis. Periods of indiscriminate selling and forced liquidation create long-term opportunities to buy quality companies at a relatively lower price.

Despite long-term bond yields hovering near record lows even before the pandemic-induced bear market began (10-year Treasury yield was at 1.5% in February), bonds still demonstrated their value in acting as a portfolio stabilizer.

The speed of change in conditions this year highlighted the wide gap between the economy and the markets, reminding us of the forward-looking nature of the markets. The 34% sell-off in February and March took place when unemployment was near 50-year lows, and the market declines reflected concerns over the growing pandemic and the anticipation of the resulting recession. But then stocks rallied in expectancy of a better economic environment in the second half of 2020, even as unemployment spiked.

Heading into 2021 we look forward to hopefully a year when the pandemic subsides, lives return closer to normal, and the economic recovery picks up steam. There will likely continue to be plenty of challenges in the year ahead, but as history and this year's unprecedented events have taught us, sticking to one's investment plan can help investors stay on track toward achieving their investment goals. 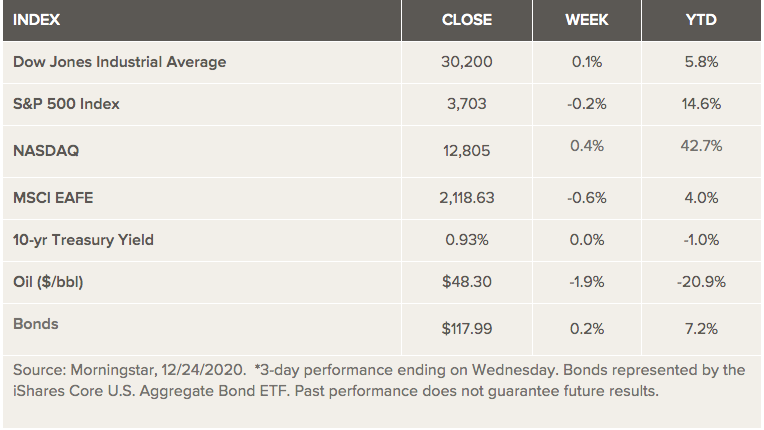 Important economic data being released next week include pending home sales and the Chicago PMI.

The Weekly Market Update is published every Friday, after market close.

This is for informational purposes only and should not be interpreted as specific investment advice. Investors should make investment decisions based on their unique investment objectives and financial situation. While the information is believed to be accurate, it is not guaranteed and is subject to change without notice.

Investors should understand the risks involved of owning investments, including interest rate risk, credit risk and market risk. The value of investments fluctuates and investors can lose some or all of their principal.

Past performance does not guarantee future results.

Market indexes are unmanaged and cannot be invested into directly and are not meant to depict an actual investment.

Dividends may be increased, decreased or eliminated at any time without notice.

Special risks are inherent to international investing, including those related to currency fluctuations and foreign political and economic events.