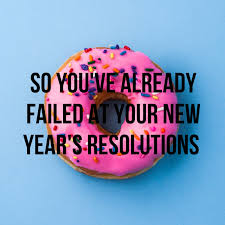 About now even the steeliest of New Year’s Resolutions have gone by the proverbial wayside. What’s new? And, why do we fail? Maria Konnikova writing in a recent issue of The New Yorker delves into why we make resolutions in the first place and inevitably why they end up failed and forgotten.

The article points to data produced by social studiers that (frankly) say we put too much pressure on ourselves and there is no downside to giving up (again).

We go the gym most often in January then taper off (usually at the same weight as when we started). The beginning of the week, month or year forms what psychologist Richard Thaler calls a “notational boundary.” With that researchers suspect comes a sense of optimism, the promise of a new me.

Why we fail fills out the rest of The New Yorker article, but it’s like looking into the bathroom mirror just after waking up. Those brave enough to journey on click here.