EXCERPT: From the public domain Chapter 1 of “The Strange Case of Dr. Jekyll and Mr. Hyde” by Robert Louis Stevenson, 1886.

“Well, it was this way,” returned Mr. Enfield: “I was coming home from some place at the end of the world, on a dark winter night, and my way lay through a part of town where there was literally nothing to be seen but lamps. Street after street, and all the folks asleep — street after street, all lighted up as if for a procession and all as empty as a church — till at last I got into that state of mind when a man listens and listens and begins to long for the sight of a policeman.

All at once, I saw two figures: one a little man who was stumping along eastward at a good walk, and the other a girl of maybe eight or ten who was running as hard as she was able down a cross street.

In no time at all, the two ran into one another at the corner; and then came the horrible scene; for the man trampled calmly over the child’s body and left her screaming on the ground.

It wasn’t like a man; it was like some damned Juggernaut. I gave a shout, ran after him, collared the visage, and brought him back to where there was already quite a group about the screaming child. The scoundrel was perfectly cool and made no resistance, but gave me one look, so ugly that it brought out a sweat on me like I had been running for some distance.

The people who had turned out were the girl’s own family; and pretty soon, the doctor, for whom she had been sent, put in his appearance. Well, the child was not much the worse, more frightened, according to the Sawbones; and there you might have supposed would be an end to it.

But there was one curious circumstance. I had taken a loathing to this barbarian at first sight. So had the child’s family, which was only natural. But the doctor’s case was what struck me. He was the usual cut-and-dry apothecary, of no particular age and colour, with a strong Edinburgh accent, and about as emotional as a bagpipe.

Yet, he was like the rest of us; every time he looked at my prisoner, I saw that Doc turn sick and white with the desire to kill him. I knew what was in his mind, just as he knew what was in mine; and killing being out of the question, we did the next best. We told the man we could and would make such a scandal out of this, as should make his name stink from one end of London to the other.

If he had any friends or any credit, we undertook that he should lose them. And all the time, as we were pitching it in red hot, we were keeping the women off him as best we could, for they were as wild as harpies. I never saw a circle of such hateful faces; and there was the man in the middle, with a kind of black, sneering coolness — frightened too, I could see that — but carrying it off like Satan.

‘If you choose to make capital out of this accident,’ said he, ‘I am naturally helpless. No gentleman but wishes to avoid a scene,’ says he. ‘Name your figure.’

A hundred pounds for the child’s family; he would have clearly liked to stick out; but there was something about the lot of us that meant mischief, and at last he gave in.

The next thing was to get the money; and where do you think he carried us but to that place with the odd door? — whipped out a key, went in, and presently came back with the matter of ten pounds in gold and a cheque for the balance on Coutts’s Bank, drawn payable to bearer and signed with a name that I can’t mention, though it’s one of the points of my story, but it was a name at least very well known and often printed.

The figure was stiff; but the signature was good for more than that, if it was only genuine. I took the liberty of pointing out to my friend that the whole business looked apocryphal, and that a man does not, in real life, walk into a cellar door after working hours and come out of it with another man’s cheque for close upon a hundred pounds.

But he was quite easy and sneering. ‘Set your mind at rest,’ says he, ‘I will stay with you till the banks open and cash the cheque myself.’ So we all set off, the doctor, and the child’s father, and our friend and myself, and passed the rest of the night in my chambers; and next day, when we went in a body to the bank. I gave in the check myself, and said I had every reason to believe it was a forgery. Not a bit of it.

The cheque was genuine.”

“Tut-tut,” said Mr. Utterson. “And you don’t know if the drawer of the cheque lives there?”

“A likely place, isn’t it?” returned Mr. Enfield. “But I happen to have noticed his address; he lives in some square or other.”

“And you never asked about the — place with the door?” said Mr. Utterson.

“But I have studied the place for myself,” continued Mr. Enfield. “It seems scarcely a house. There is no other door, and nobody goes in or out of that one but, once in a great while, the scoundrel. There are three windows looking on the court on the first floor; none below; the windows are always shut but they’re clean. And then there is a chimney which is generally smoking; so somebody must live there. And yet it’s not so sure; for the buildings are so packed together about that court, that it’s hard to say where one ends and another begins.”

The pair walked on again for a while in silence; and then, “Enfield,” said Mr. Utterson, “there’s one point I want to ask: I want to ask the name of that man who walked over the child.” “Well,” said Mr. Enfield, “I can’t see what harm it would do. It was a man of the name of Hyde.”

“He is not easy to describe. There is something wrong with his appearance; something displeasing, something downright detestable. I never saw a man I so disliked, and yet I scarce know why. He must be deformed somewhere; he gives a strong feeling of deformity, although I couldn’t specify the point. He’s an extraordinary-looking man, and yet I really can name nothing out of the way. No, sir; I can make no hand of it; I can’t describe him. And it’s not want of memory; for I declare I can see him plainly this very moment.”

ABOUT THE AUTHOR: Robert Louis Stevenson (1850 -- 1894) was a Scottish novelist, poet and travel writer, most noted for Treasure Island, Kidnapped, Strange Case of Dr Jekyll and Mr Hyde, and A Child's Garden of Verses. Born and educated in Edinburgh, Stevenson suffered from serious bronchial trouble for much of his life, but continued to write prolifically and travel widely in defiance of his poor health. 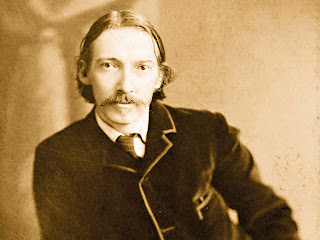 As a young man (left), he mixed in London literary circles, receiving encouragement from Andrew Lang, Edmund Gosse, Leslie Stephen and W. E. Henley, the last of whom may have provided the model for Long John Silver in Treasure Island. In 1890, he settled in Samoa where, alarmed at European and American encroachment upon the South Sea islands, his writing turned away from romance and adventure toward a darker realism.

He died in his island home in 1894. A celebrity in his lifetime, Stevenson's critical reputation has fluctuated since his death, though today his works are held in general acclaim. In 2018 he was ranked, just behind Charles Dickens, as the 26th-most-translated author in the world. 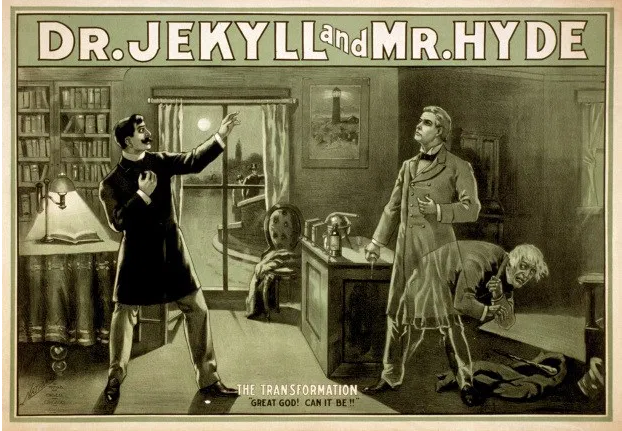