CIVIL WAR WEEK / BATTLE DAY 2 / BEHIND THE FISHHOOK & THE COUNCIL


GUEST BLOG / By Allen C. Guelzo is the Henry R. Luce Professor of the Civil War Era at Gettysburg College and the author of Gettysburg: The Last Invasion (Knopf).

The second day in itself ranks as the 10th bloodiest battle of the Civil War—with far more casualties than the much larger Battle of Fredericksburg.

By the morning of July 2, the main strength of both armies had arrived on the field. Battle lines were drawn up in sweeping arcs similar to a "J," or fishhook shape. The main portions of both armies were nearly a mile apart on parallel ridges: Union forces on Cemetery Ridge, Confederate forces on Seminary Ridge, to the west. Gen. Robert E. Lee, commanding the Confederate troops, ordered attacks against the Union left and right flanks (ends of the lines).

Starting in late afternoon, Confederate Gen. James Longstreet's attacks on the Union left made progress, but they were checked by Union reinforcements brought to the fighting from the Culp's Hill area and other uncontested parts of the Union battle line.

To the north, at the bend and barb of the fishhook (the other flank), Confederate Gen. Richard Ewell launched his attack in the evening as the fighting at the other end of the fishhook was subsiding. Ewell's men seized part of Culp's Hill, but elsewhere they were repulsed.

The day's results were bloody but indecisive for both armies.  But what happened that night in a meeting of Union generals was equally stunning.  They made a decision that ultimately led to the winning of the war.

AFTER SECOND DAY OF BATTLE UNION GENERALS VOTE NOT TO RETREAT.

Now it is difficult to assess whether it was Union Gen. Daniel Sickles’ chicken-brained insubordination or Gen. George Meade’s neglect of his left flank that was more responsible for the sorry results of July 2. But wherever the blame lies, it is reasonably certain that by the evening of the 2nd, Meade’s mind was turning to the safety of Pipe Creek. Eight months after the battle, the Army of the Potomac’s chief of staff, Maj. Gen. Daniel Butterfield, testified before Congress that Meade had instructed him on the morning of July 2 “to prepare an order to withdraw the army… from the field of Gettysburg.” Butterfield swore that the onset of Longstreet’s attack prevented any distribution of the order, but whether Butterfield was, in fact, inventing the story for the purpose of evening up grudges with Meade, the army commander does seem to have been ready to issue such an order by 9 o’clock that night, when he called a council of his corps commanders.

Even the usually loyal Gen. John Sedgwick told his VI Corps staffer Martin McMahon that he had been summoned to the council because “General Meade was thinking of a retreat.” If so, Meade was rudely jolted by the unanimous protest of his subordinates that the Army stay put and fight. “We have been hunting Lee for weeks,” Sedgwick protested, “and now that we’ve got him here, don’t retreat.”

Gen. Winfield Hancock agreed: “The Army of the Potomac has had too many retreats….Let this be our last retreat.”

Meade was “greatly displeased with the result,” and only gave way grudgingly: “Have it your way, gentlemen, but Gettysburg is no place to fight a battle in.” No one doubted Meade’s personal courage, but they could not help noticing his risk-averse inclinations: “He thought it better to retreat with what we had, than run the risk of losing all.”

Meade wrote his wife that day: “We had a great fight yesterday…both armies shattered—Today at it again with what result remains to be seen.” Shattered indeed: The I, III, V and XI Corps had been wrecked in the previous two days’ fighting, as had two divisions of the II Corps and the XII Corps. Beyond Gen. John Gibbon’s old II Corps division, Meade was left with only the VI Corps as a reserve.

Would that be enough to win Day 3? 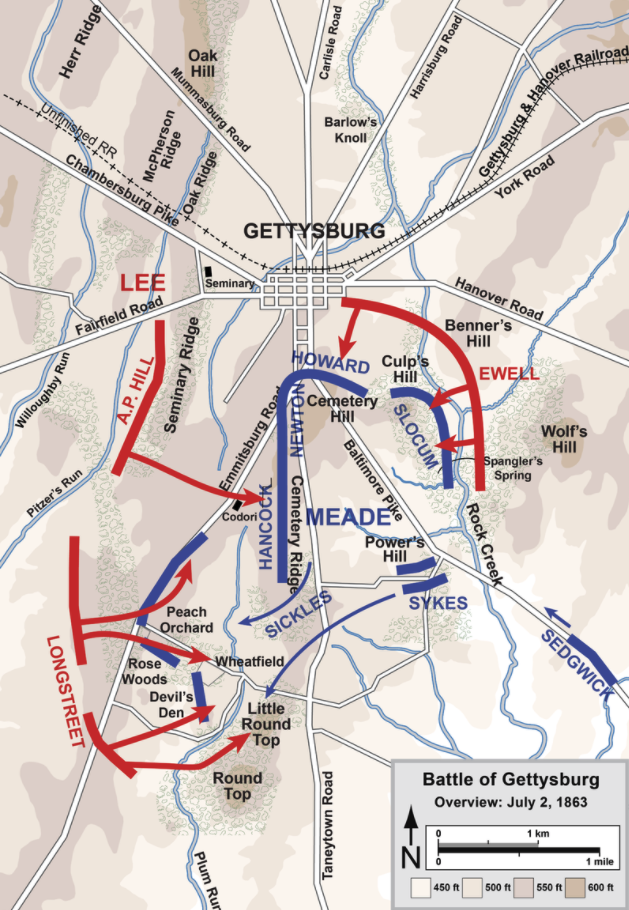