Excerpt from “The History of the English Speaking Peoples” by Sir Winston Churchill.

By the third day began. Gen. Robert E. Lee still bid high for victory. He resolved to launch 15,000 men, sustained by the fire of 125 guns, against Gen. George Meade’s left-center, at the point where one of Hill’s brigades had pierced the day before.

Gen. Richard Ewell’s corps would at the same time attack from the north, and if the assault under Gen. George Pickett broke the Federal line the whole confederate army would sweep and divide Meade’s lines.

Again the rebel attack was ordered for the earliest possible hour. But, it was the Federals who opened the third day by recapturing in the grey of dawn some of the trenches vacated the previous evening, and after hard fighting drove the confederates before noon entirely off Culp’s Hill.

Exhausted by this, Gen. Ewell made no further movement. Gen. James Longstreet was still arguing vehemently in favor of a wide turning movement around Gen. Meade’s left. The heavy losses which his corps had suffered (the day before) on the second of July made this idea more difficult than ever.

The morning of July 3 passed in utter silence. It was not till one in the afternoon that the Confederates began the heaviest bombardment ever launched in North America.

Gen. Longstreet unable to rally himself to a plan he deemed disastrous, left it to the artillery commander, Edward Alexander, to give the signal to Gen. Pickett to move forward. At half-past two, the confederate ammunition, dragged all the way from Richmond in tented wagons, was running short.

“Come quick,” Alexander said to Pickett, “or my ammunition will not support you properly.” 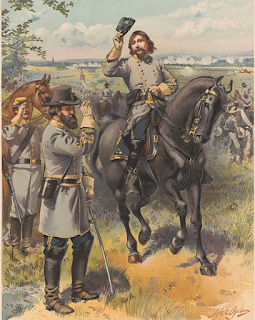 “General,” said Pickett to Longstreet, who stood somber and mute, “shall I advance?” By an intense effort, Longstreet bowed his head in assent.

Pickett saluted (left), and set 42 regiments against the Union center.

We see today, upon this battlefield so piously preserved by north and south, and where many of the guns still stand in their firing stations, the bare, slight slopes up which this grand infantry charge was made. In splendid array, all their battle flags flying, the forlorn assault marched on.

But like the old guard on the evening of Waterloo, they faced odds and metal beyond the virtue of mortals.

The Federal rifled artillery paused until Pickett’s men were within 700 yards; then they opened again with a roar and cut lanes in the steadfastly advancing ranks. On they went, without flinching or disorder; then the deadly sound, like tearing paper, as Lee once described it, rose above the cannonade. But Pickett’s division still drove forward and at trench, stone wall, or rail fence closed with far larger numbers of men, who, if not so lively as themselves, were at least ready to die for their cause.

All three brigadiers in Pickett’s division fell killed or mortally wounded. Gen. Lewis Armistead with a few hundred men actually entered the Union center, and the spot where he died with his hand on a captured cannon is today revered by the manhood of the South. But where were the rebel reserves to carry through this superb charge? Where were the simultaneous attacks to grip and rock the entire front?

Gen. Lee at Gettysburg no more than Napoleon at Waterloo could win dominance. The valiant stormers were killed or captured; the rest walked home across corpses that encumbered the plain amid a remorseless artillery fire.

Less than a third came back. Lee met them on his horse Traveller with the only explanation, which they would not accept, “It is all my fault.”

Longstreet, in memoirs written long afterward, has left on record a sentence which is his best defense: “…as I rode back to the line of batteries, expecting an immediate counter-stroke, the shot and shell plowed the ground around my horse, and an involuntary appeal went up that one of them (shells) would remove me from scenes of such awful responsibility.” But there was no counterstroke. The Battle of Gettysburg was at an end. Twenty-three thousand Federals and more than 20,000 confederates had been smitten by lead or steel. After the Antietam (battles), Lee confronted his foe on the morrow and offered to fight again.

But no one knew better than Lee that it was decisive. With every personal resource Lee gathered up his army. An immense wagon train of wounded were jolted, springless, over miles and miles of crumpled road, singing “carry me back to old Virginia” or moaning “For God’s sake kill me.”

On the night of the 4th, Lee began his retreat in the rain.

Meade let him go. The energy for pursuit had been expended in the battle.

The Potomac was found in flood; Lee’s pontoon bridge had been partially destroyed by a raid from the City of Frederick.

For a week the confederates stood at bay behind entrenchments with their backs to an unfordable river. Longstreet would have stayed to court attack, but Lee measured the event. Meade did not appear until June 12 and his attack was planned for the 14th.

When that morning came, Lee, after a cruel night march, was safe on the other side of the river. He carried with him his wounded and his prisoners. In retreat, he had lost only two guns, and the war.

In Washington, Lincoln and his administration were extremely discontented with Meade’s inactivity, and not without reason. Napoleon might have made Pickett’s charge, but he certainly would not have made Meade’s impotent pursuit. Lincoln promoted Meade only to the rank of Major-General for his good service at Gettysburg.

Lee wended his way back by the Shenandoah valley to his old stations behind the Rappahannock and Rapidan.

The south had shot its bolt. Lee believed that his own army was invincible, and after Chancellorsville, he had begun to regard the Army of the Potomac almost with contempt.

He failed to distinguish between bad troops and good troops badly led. It was not the army but its commanded that Lee had beaten at the Battles of Fredericksburg and Chancellorsville.

It may well be that had fired Gen. Joseph Hooker had been allowed to retain his command Lee might have defeated him a second time. Fortune, which had befriended Lee at Chancellorsville, now turned against him. Gen. J.E.B. Stuart’s long absence left him blind as to the enemy’s movements at the most critical stage of the campaign, and it was during his absence that Lee made the fatal mistake of moving to the East side of the South Mountain range. Lee’s military genius did not shine at Gettysburg.

He was disconcerted by Stuart’s silence, he was “off his balance,” [with his personal ill health at the time] and his subordinates became conscious of his mood. Above all, he had not Gen.Thomas “Stonewall” Jackson at his side.

Longstreet’s recalcitrance had ruined all chance of success at Gettysburg. On Longstreet the south laid a heavy blame.

There was no other battle in the East in 1863, and the armies were left for the winter facing each other on the Rapidan River. 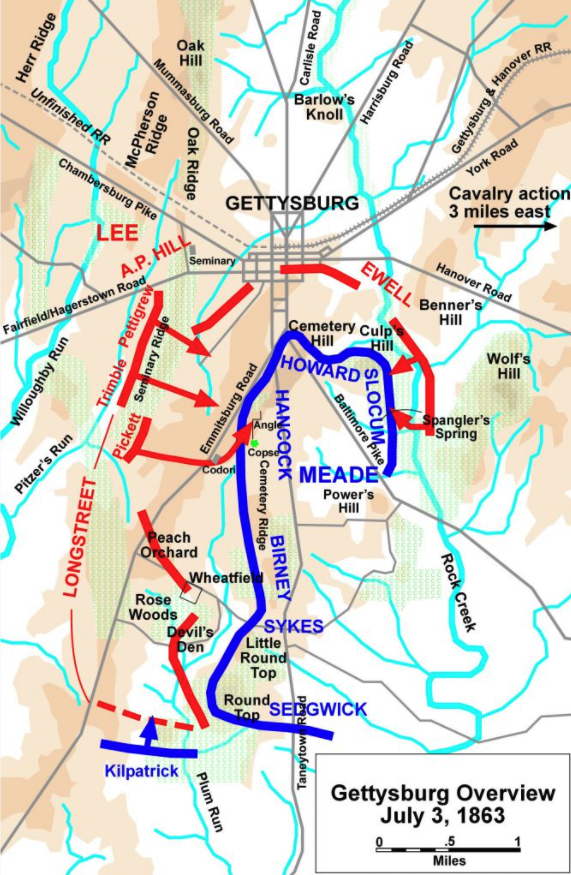 CIVIL WAR WEEK continues tomorrow with fantasy by Sir Winston Churchill, who posed the question "what if the South won the war?"