GUEST BLOG / By Silvia Foster-Frau, Ann Gerhart, Danielle Rindler, Karly Domb Sadof, Garland Potts and Artur Galocha.—In an exhaustive compilation, a noteworthy example of journalistic enterprise, reporters from the Washington Post created a unit by unit profile of the shattered lives impacted by the horrific collapse of Champlain Towers South. For so many, survival or likely death came down to a single number: their condo unit.

The Washington Post used property records, dispatch calls and interviews with survivors and relatives of the missing to learn who lived in the building and where they were at the time of the collapse.

In seconds, hundreds of lives changed forever. For many, the outcome hinged on their condo number.

The following is one segment of the Post’s coverage:

Split in half: The 04 units

The few hundred permanent residents of 8777 Collins Avenue in Surfside, Fla., had selected their homes for all sorts of reasons: what was available, what they could afford, the square footage and the view.

In the end, their fate was determined by luck and an invisible fault line that became apparent around 1:30 a.m. June 24, when the central and east sections of the building fell away from the towers’ south side.

That line ran through the 04 apartments, splitting them in half. In those units, the master bedrooms — and the people sleeping in them — were pulled down into the rubble.

But the living rooms were on the other side of the fault line; they remained standing, and people in them had a chance to survive.

The family in Unit 904 experienced this divide.

When the condos began to crumble, Angela Gonzalez and her 16-year-old daughter, Devon, went into a free fall and landed on the fifth floor. Though the impact broke Angela’s pelvis, she pulled her daughter from the rubble and escaped. Mother and daughter were later taken to the area’s largest trauma center. But Edgar Gonzalez, husband and father, vanished into the wreckage. 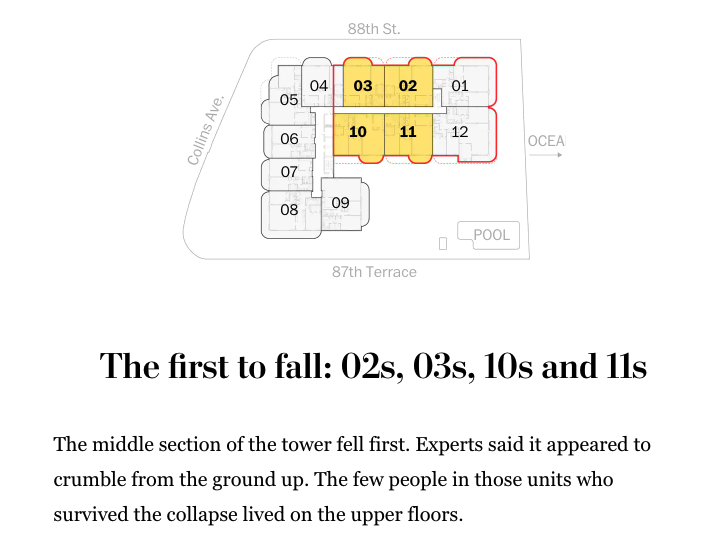