The first day of the Battle of Gettysburg akin to hot coals from a summer BBQ grill being spilled on to dry grass causing pockets of flames to erupt everywhere.  The following is just one such hot spot among hundreds that happened in and around the village of Gettysburg on July 1, 1863.

By 10 am on the morning of July 1, 1863, the temperature was soaring into the 80s and the situation near McPherson’s Ridge, outside the town of Gettysburg, was becoming increasingly desperate for the Army of the Potomac.

Tennessee and Alabama soldiers from Gen. James Archer’s Brigade had already crossed over the open field in front of Herr Ridge, splashed across the tangled stream bottom at Willoughby’s Run, and were now pressing up through the Herbst (or McPherson’s) Woods.

The Union cavalry screen (Buford's cavalry) that had been gallantly holding the ground west of Gettysburg was simply no match for the huge Confederate force converging upon the strategic town. Fortunately for the Army of the Potomac, the veteran 24th Michigan aka Iron Brigade, among the toughest units in the army, was just arriving on the western outskirts of the town of Gettysburg, near the prominent Lutheran Seminary.

The first regiment to arrive, the 2nd Wisconsin, was hustled down to the edge of Herbst Woods by Left Wing commander Maj. Gen. John Reynolds (left) himself.

Shortly after entering the woods, Reynolds, who was still conspicuously mounted on his horse, was struck by a bullet, reeled from his saddle, and fell to the ground, dead. The popular Reynolds was the highest-ranking general killed at Gettysburg and his death had a profound impact upon the rapidly developing Union defenses July 1st.

The 24th Michigan followed closely on the heels of the 2nd Wisconsin and advanced so fast that the men lacked time to load their rifles before entering the smoke-filled woods to the left of the 2nd Wisconsin. Joined by the 19th Indiana and 7th Wisconsin, the Iron Brigade now had roughly 1,450 men positioned to take on the 1,200 soldiers in Archer’s Brigade.

Reaching the southern edge of Herbst Woods, the Michigan men were quickly greeted by Confederate bullets. Color Sergeant Abel Peck of the 24th was killed straight off and the regiment’s colors were quickly grabbed by Corporal Charles Bellore before it hit the ground. Despite the growing enemy fire, the 24th pressed forward. 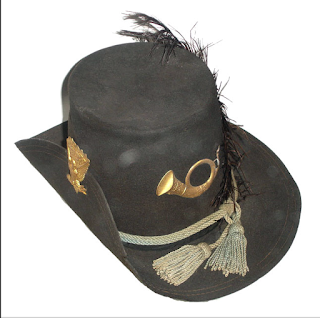 Legend has it that the Confederate soldiers of Archer’s Brigade, who thought at first that they were facing inexperienced local forces, saw the soft-brimmed Hardee hats worn by the Iron Brigade and exclaimed, “there are those damned black-hatted fellows again. ‘Taint no militia. It’s the Army of the Potomac.”

As more of the tough westerners from Wisconsin, Indiana, and Michigan filed into the woods, Archer’s men began to slowly fall back towards Willoughby’s Run. Little did they know, time was already rapidly running out for Archer’s Brigade. Pressing further into Archer's right flank, the 24th Michigan and the 19th Indiana struck and overlapped the 13th Alabama, forcing them to rapidly retire towards Herr’s Ridge.

Col. Henry Morrow of the 24th then directed the Michigan troops across Willoughby’s Run and into the rear of the Tennessee regiments who were busy holding off the rest of the Iron Brigade. Pressed in front, flank, and rear, many of Archer’s men barely escaped the Union vise. Upwards of 200 Confederates who failed to run early, including Gen. Archer himself, quickly surrendered to the Iron Brigade. Despite taking heavy casualties during the morning counterattack, the Iron Brigade had performed brilliantly once again. With Archer’s Brigade now driven back or captured, the Union troops pressed forward across Willoughby’s Run and into the open fields beyond. So many men were exhausted and it was only noon of that bloody day.

Union Army soldiers in the 7th Wisconsin Volunteer Infantry Regiment, Company I, of the Iron Brigade 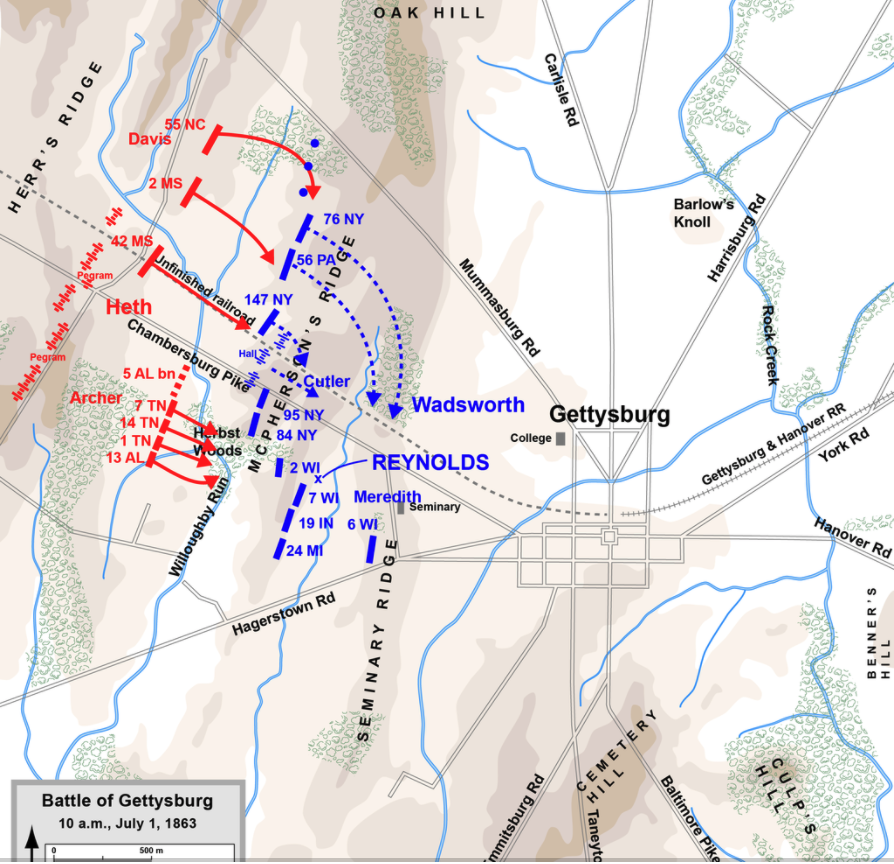