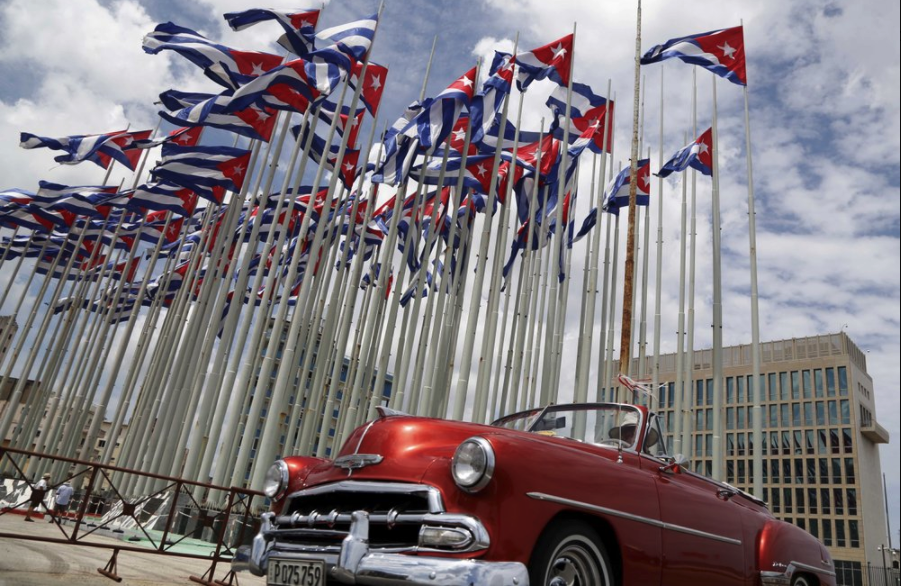 One of downtown Havana Cuba’s omnipresent 1952 Chevrolet Deluxe convertibles stopped briefly at the flag plaza. In 2006, the Cuban government built a vivid plaza of flags (el monte de las banderas) with 138 flagpoles. The multi-flag display is near the U.S. Interest Section Office building that displays large neo messages about Cuba’s social situation and human rights. The government denies they were trying to block the U.S. messages.

One plaque in the flag plaza has an inscription, which follows: This mount of flags serves as a response from the people of Cuba to the clumsy arrogance of the U.S. government: 138 Cuban flags will wave with dignity in front of the eyes of the empire, to remind it, starting today, of every year that the Cuban people have struggled since our founding fathers gave the cry for independence in 1868. Like then, before the bright shadow of this great mount of flags, we continue fighting as free men and women. 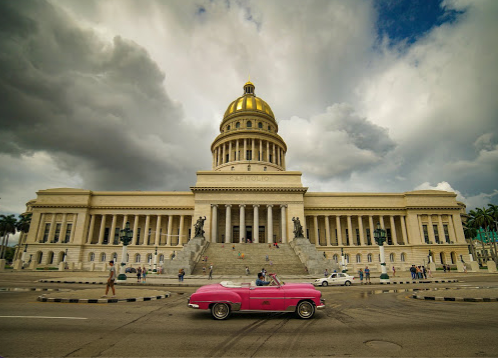 There goes another splashy pink 1952 Chevy convertible (above) with whitewall tires and a cool attitude. In the background is Cuba’s National Capitol building, which is one meter taller than the U.S. Capitol. El Capitolio more ornate and the dome, according to architect Eugenio Piedra was inspired by the Pantheon in Paris. And no one grumbles if you park by the front steps and climb the stairs to take a selfie of the bronze entry doors depicting scenes from Cuban history. 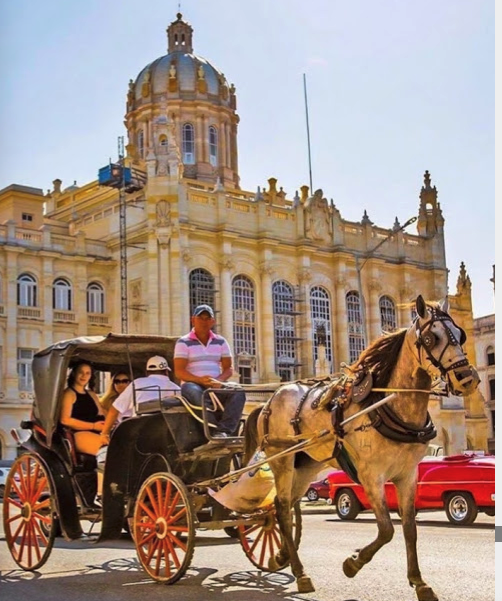 On any given day, you will find a 1952 Chevy Deluxe convertible crashing your photos. And, no it’s not the same car. We checked the plates. They’re different. Here while focusing on a mode of transportation that is universal and timeless, the Chevy ducked into our picture (above). In the background is the Museum of the Revolution with its distinctive dome and military tank parked permanently nearby. 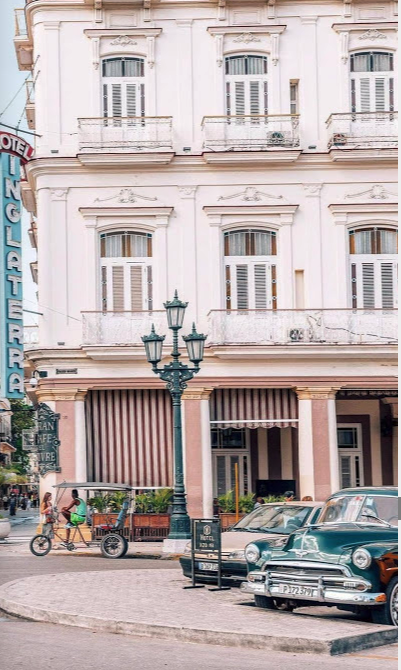 And our unshy Chevies aren’t all the same color albeit they’re the same 1952 model. Big hint that your Chevy is 1952 is the fact it was the last year the windshield was separated in half by a center brace. By 1953, the wrap-around windshield was in vogue forever on. In the background is one of Havana’s pride and joy hotels, the neo-classic Inglaterra, which was opened in 1875 making it the oldest quality hotel in Cuba. 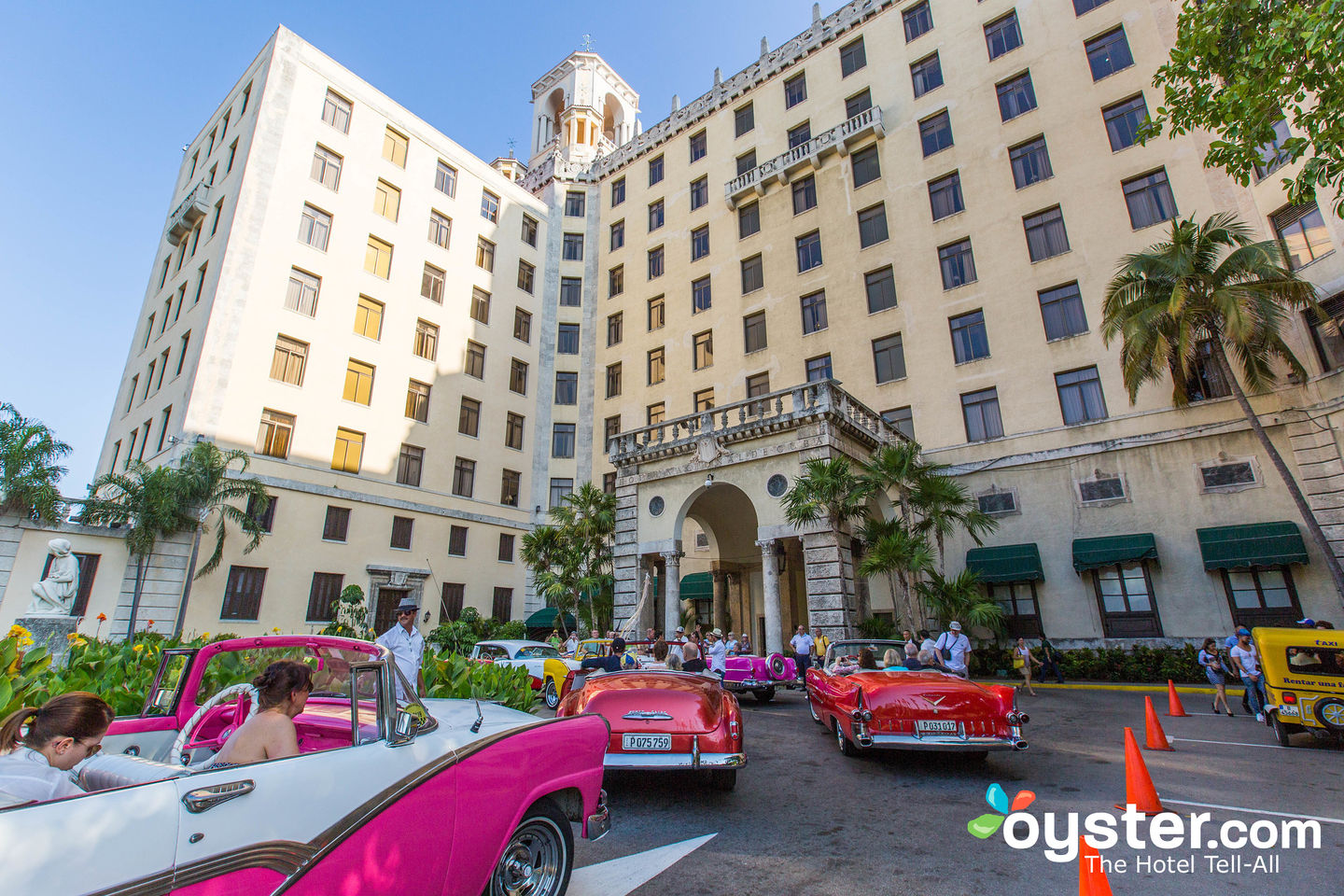 We stayed at the Nacional de Cuba Hotel on the trendy westside near the Malecon, which we will return to in a snapshot. It’s a five-star place that was built in 1930 and very popular with the international set as reflected by all the celebrity photos in the bar areas. We didn’t have to go far to find our red 1952 Chevy Deluxe convertible in line for the valet parkers. Hiss and boo, that's a vintage Ford also in the hotel queue. 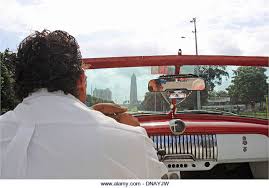 View (above) from inside our 52 Chevy shows the tall Jose Marti memorial tower in the distance. At 358 ft. it is the tallest structure in Havana. Modern monument to writer Jose Marti who led the revolution for independence from Spanish rule. 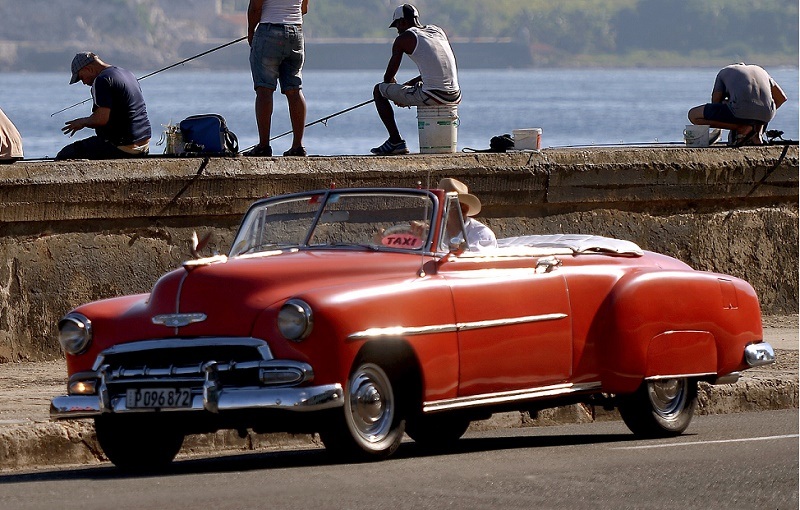 Malecon, Havana’s sweeping corniche forms an arc along the north coast. It’s a terrific place to fish for red herring. Our red 1952 Chevy Deluxe taxi driver is heading out to his next fare after enjoying the always fresh breeze off the Caribbean. Factoid: Population of Cuba is about the same as Los Angeles (11 million). 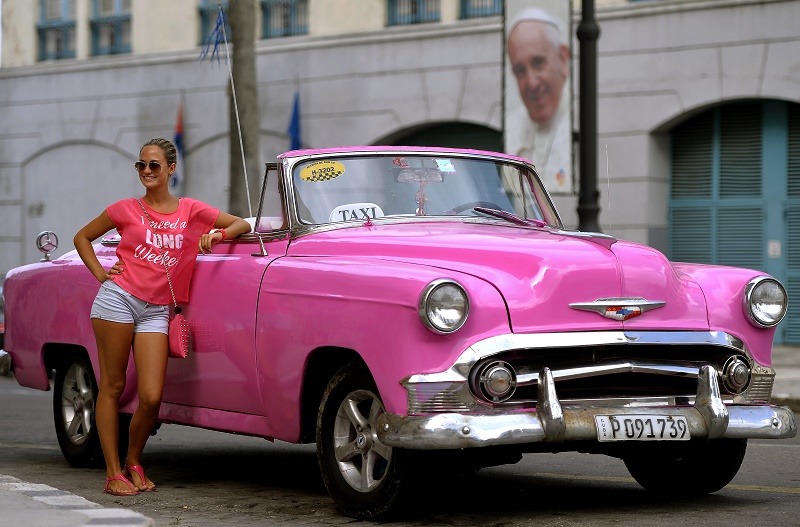 OK, for artistic purposes we allowed this 1953 Chevy into the mix because it offers a nice view of a tourist hailing a taxi. We were tipped to this photo op by the citizen who hung all the posters of Pope Francis along Havana’s roadways. 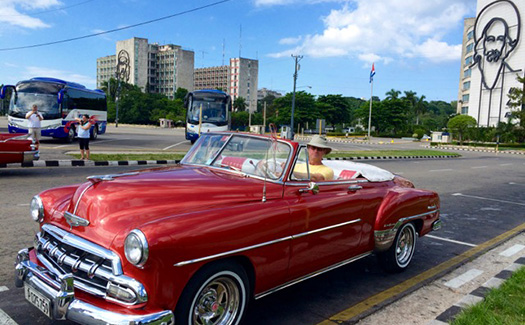 Plaza de Revolution is in the background (above). We noticed this familiar red Chevy circling the political plaza every few minutes driven by a visiting CIA agent for no reason. Said his name was Fred None-of-your-business. Note the government office building with Che Guevara’s image on the wall (top left). Che’s image is everywhere.  So is Mr. Cienfuegos adorning the offices (right).  Keep moving, Fred. 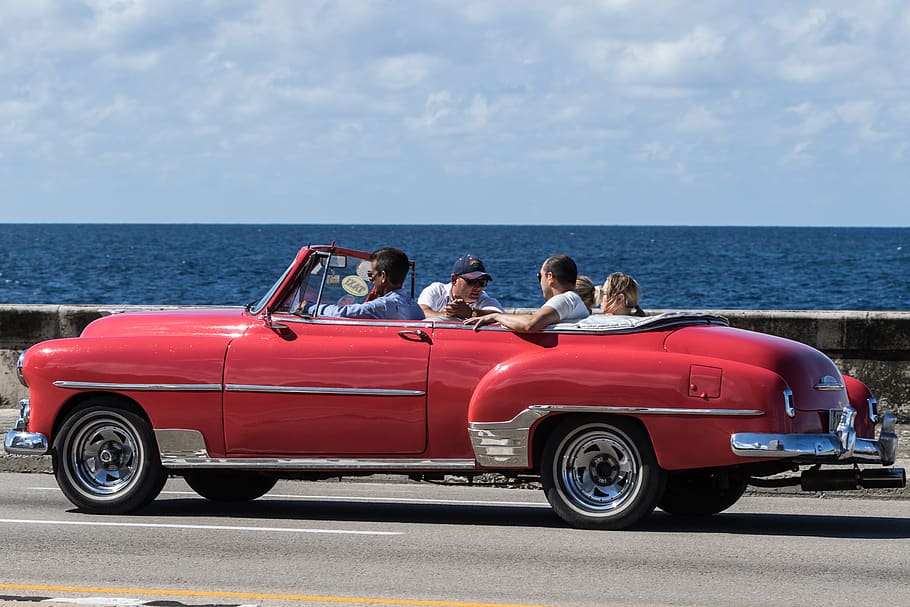 Red 1952 speeding down the Malecon is a sum of all its parts. Because of the U.S. embargo parts from General Motors are hard to find. But, thanks to Cuba’s trading partners you can retrofit our Chevy with a tractor diesel engine from North Korea; transmission from the Czech Republic; tires and brakes from Russia, and gas and oil from Venezuela. Of course, large sources of smaller spare parts are smuggled in via the black market from Miami.  Ten minutes ago this red racer, right, was parked in front of the venerable Sloppy Joe's bar (site of 1959 Alec Guinness film "Our Man in Havana," (below). 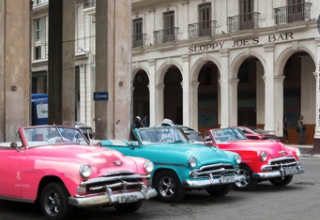 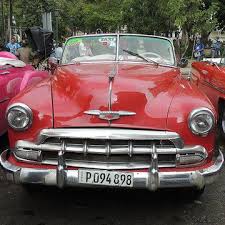 Here’s our breezy red buddy taking a break in Old Havana near Plaza de Armas, where you can buy books from around the world. Most of them have Che on the cover. 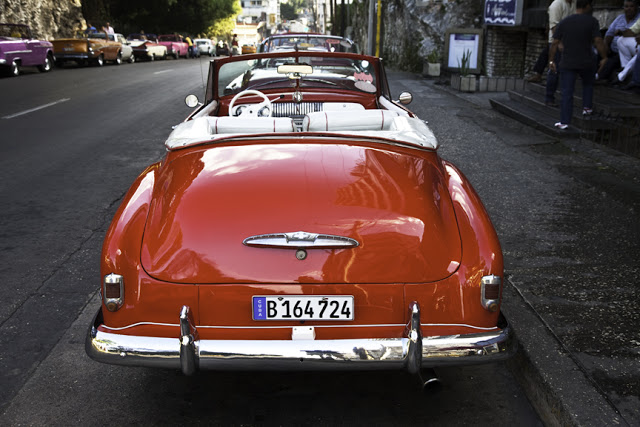 Here’s another rentable cherry red 1952 Chevy Deluxe convertible (above) this time along Calle O, Vedado neighborhood, Havana. You’ll note the lineup of vintage cars that park here do so to be near the Hotel Nacional de Cuba.