GUEST BLOG /By Steven Spatz, President of BookBaby--Strong book sales numbers in the first half of 2021 set the stage for what should be a great holiday season for published authors.

As much of the world reopened in the first half of this year, there was one industry that held its breath about the effects of our newly regained freedoms. The publishing industry was one of the few marketplaces that experienced growth during the dark COVID-19 quarantine days.

After years of slumping sales caused by competition with streaming services, video games, and the like, book sales rose eight percent in 2020 over the previous year. In retrospect, that shouldn’t be a surprise. During a time when people were looking for diversion and distraction beyond video screens, books of all subjects and genres were selling around the globe.

Publishers and authors were grateful for this small silver lining. So, as life slowly returns to near normal, book industry watchers had one big question on their minds: Would the newly vaccinated public flock back to bars, restaurants, theaters, and concerts and forget about their renewed love affair with books?

The results are in, and authors should rejoice. Printed book sales are growing faster than ever before. Physical book units grew 18.5 percent in the first half of 2021 over 2020 sales according to NPD BookScan.

Nearly 387 million books in hand were sold from January to June 2021. It’s important to note that NPD BookScan only counts units from traditional publishers, which means these numbers do not include the millions of books sold by self-published authors.

So, while the actual increases are probably impossible to compute, they’re very likely four to six times larger! One fascinating data point that caught my eye: Backlist titles had the strongest gains, up 21.4 percent, while frontlist sale increases were a solid 12.4 percent.

That should serve as a reminder that there’s life in every book you’ve published. The inventory and backlist titles you create can be money in the bank with the right marketing and exposure.

The news that seems most encouraging for the overall author community is that the growth curve encompasses just about every book category. 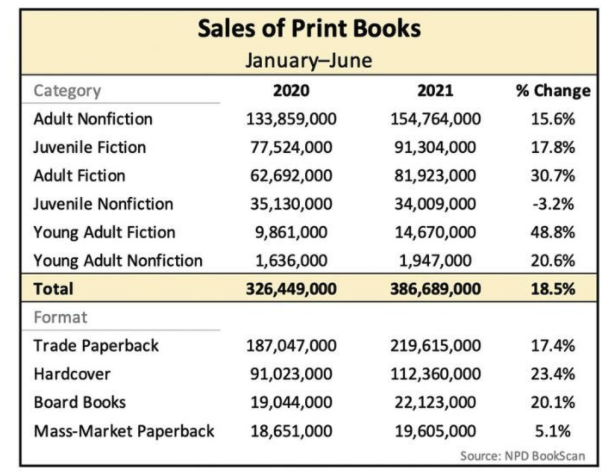 Adult nonfiction. The biggest overall category, adult nonfiction, grew from 134 million to 155 million, a 15.6 percent boost. Going inside the numbers, sales of self-help books had the largest gain, up 32.1 percent. Next came business and economics books — up 24 percent — while home and gardening and general nonfiction had increases of just over 22 percent.

Adult fiction. Adult fiction units surged 31 percent, growing to 81 million units. Kristin Hannah’s The Four Winds led the way with sales of nearly 560,000 copies since its release in February. The next 15 spots are a mix of both new releases and backlist titles.

YA fiction. Young adult fiction titles nearly doubled in sales, rising 49 percent in the year-over-year study. Interestingly enough, the top title in the category, They Both Die at the End, by Adam Silvera, was first published in December 2018.

The book caught fire on BookTok, a community of readers on TikTok who post videos reviewing and recommending books. The video form has boosted sales of a large number of YA titles this year.

In fact, the only category to see a decline, juvenile nonfiction, was expected to lose ground year-over-year. This segment experienced a massive 25 percent increase in 2019 as home-schooling and a general demand for books geared toward helping parents educate and entertain their children soared.

It’s a great time to publish a book

All this good news serves to underscore one of my favorite sayings: There’s never a bad time to publish a book. As these numbers show no signs of slowing as we head into the profitable fourth quarter timeframe.

Like the headline says, it’s a great time to publish a book, and you still have time to get yours to market in time for the holidays. 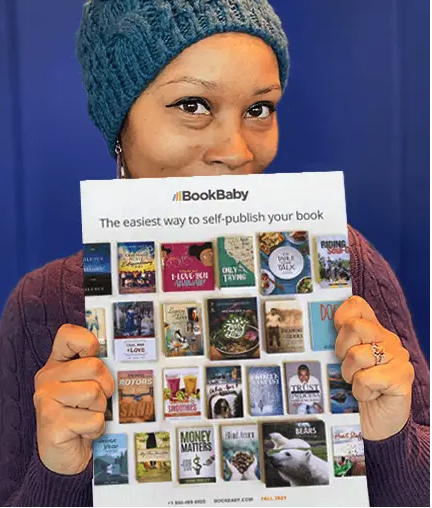 Here’s one more bit of inspiration: The 2021 BookBaby catalog has been updated (above) with all the newest publishing products and services available for self-published authors including https://www.bookbaby.com/free-guide/bookbaby-catalog Quality in-house paperback and hardcover book printing A team of world-class copy and line editors Distribution to the world’s largest bookstores and online retailers And plenty more.

ABOUT THE AUTHOR Steven Spatz is a writer, marketer, and the President of BookBaby, the nation’s leading self publishing services company. Spatz’s professional writing career began at age 13, paid by the word to bang out little league baseball game stories on an ancient manual typewriter for southern Oregon weekly newspapers. His journalism career continued after graduation from the University of Oregon at several daily newspapers in Oregon.

When his family took over a direct marketing food business, Spatz redirected his writing and design skills into producing catalogs. The Pinnacle Orchards catalog was named "Best Food Catalog," received dozens of other national awards, and the business grew into one of the nation’s largest gourmet fruit gift businesses. After the company was sold, Spatz continued his direct marketing career with Fortune 500 companies including Mattel and Hasbro. He joined AVL Digital in 2004 to lead the direct-to-consumer marketing teams for music industry-leading brands Disc Makers, Oasis, and CD Baby. After serving as Chief Marketing Officer, Spatz was tapped to lead the company’s new publishing division in late 2014. In 2019, the AVL Digital Management team purchased the New Jersey brands, including BookBaby.

The company is headquartered in Pennsauken, NJ (just outside Philadelphia, PA) and meets the printed book and eBook needs of thousands of self-publishing authors around the globe. Spatz lives in Glenside, PA with his two children, a demented cat, and some well-used bicycles. Steven loves to hear from authors, editors, and publishers in the BookBaby community with tales of publishing trials and triumphs. To tell him your story, write to steven@bookbaby.com.

NOTE FROM PILLARTOPOST.ORG A staff member with our daily magazine-style blog is researching self-publishers as a possible outlet for her first novel. She ordered BookBaby’s catalog as mentioned above and found it well worth the time to order a hard copy. She’s been taking it everywhere with her because she’s found it useful information for a newbie author. “I like BookBaby so far because it explains the fundamentals of self-publishing so I can understand them. I’m a fan, but I’m holding back because I’m still researching other self-publishing options. I’m one of those who read all the negative reviews,” said Patience J., PillartoPost.org Daily Blog staffer.