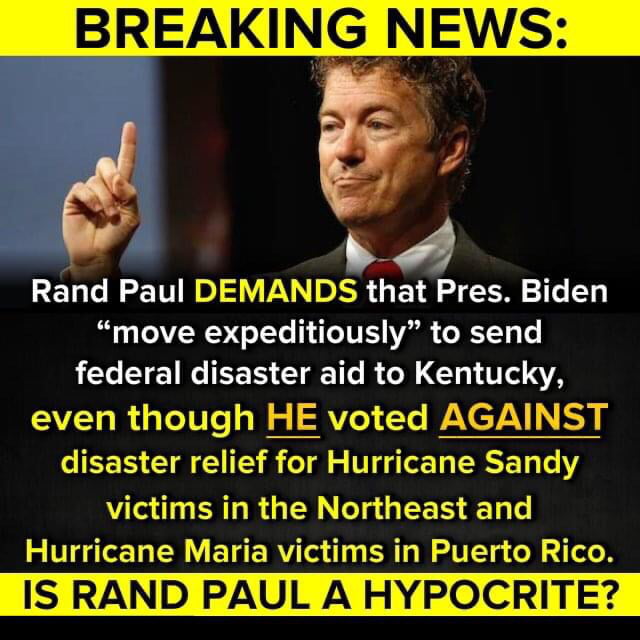 GUEST BLOG / By Chris Cillizza, CNN REALITY CHECK-- After a string of tornadoes decimated large swaths of Kentucky, Rand Paul leaped into action. "As the sun comes up this morning we will begin to understand the true scope of the devastation, but we already know of loss of life and severe property damage," the Kentucky Republican Senator wrote to President Joe Biden.

"The Governor of the Commonwealth has requested federal assistance this morning, and certainly further requests will be coming as the situation is assessed. I fully support those requests and ask that you move expeditiously to approve the appropriate resources for our state."

Which makes sense. Disaster relief is a place where the federal government can make a real difference -- particularly in the early stages of the aftermath as residents (and even state government) may be struggling to get back on its feet.

The problem? Well, Paul has made something of a career out of opposing disaster relief in places other than Kentucky.

In 2013, he opposed a disaster relief measure for the Northeast following the devastation caused by Superstorm Sandy. "I would have given them 9 billion and I would've taken the 9 billion from somewhere else,"

In 2013, he opposed a disaster relief measure for the Northeast following the devastation caused by Superstorm Sandy. "I would have given them 9 billion and I would've taken the 9 billion from somewhere else,"

Paul explained at the time, citing the price tag for the measure. "I would have taken it from foreign aid and said, 'You know what, we don't have money for Egypt or Pakistan this year because we have to help the Northeast."

Four years later, Paul voted against relief funds for the victims of Hurricane Harvey, which struck Louisiana and Texas. The Senate voted against an amendment offered by Paul that would have funded the Harvey relief efforts with money previously allocated for foreign aid. 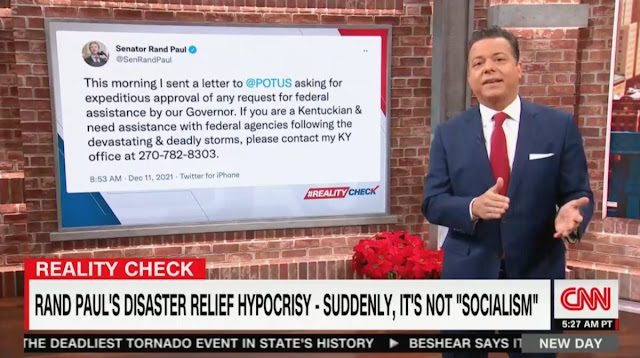 As you might have noticed, Paul's request for federal assistance from Biden over the weekend did not come with a stipulation that any federal dollars allocated to the state would have to come from an equal offset in another part of the federal budget. He just wanted help -- and understandably so.

This is what happens when you conduct your political career like a poli-sci class thought experiment in college. Sure, it's easy for you to stand on principle when some other state needs the disaster relief money from Congress.

It's not that you oppose them getting money to help them recover, it's just that you believe deep in your bones that that money can't add to the budget deficit. So, the government has to find someplace else to take from if it wants to give to a state that's hurting following a natural disaster. Except when it happens to YOUR state, those same principles go out the window.

Because it's communities you know that are struggling -- and need help immediately. They don't care where the money comes from, they just want and need it to help them in a moment of absolute crisis. That's the reality Paul is facing. And why his past opposition to disaster relief packages makes his current request for federal help ring so hollow.