Would you want to eat foam served in a plaster cast of the chef’s mouth? 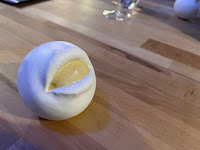 GUEST BLOG / By Randee Dawn, Today.com--A Michelin star is one of the most desired of all seals of approval in the restaurant industry. Earning one usually indicates a restaurant of the highest quality, indicating to diners that they're about to take a culinary journey that will tantalize the senses and fill the belly. But that might not always be the case.

Meet Bros', which is Lecce, Italy's sole Michelin-starred restaurant. Everywhereist travel writer Geraldine DeRuiter was drawn to visiting the restaurant, having heard rave reviews and good things about one of the youngest chefs to receive a star, Isabella Potì, as she told TODAY Food in an email. The restaurant is also led by chef Floriano Pellegrino.

Said DeRuiter: "I'm pretty used to experimental cuisine, and I've been to a few Michelin-starred restaurants," she said. "So I was anticipating something a little unusual and fun. I was not expecting a 4-hour hunger-induced fever dream."

And yet, that's what she and seven of her friends got. As DeRuiter explained in a review of the restaurant that she published on her site Everywhereist on Wednesday (note: there's some vulgar language), those hours spent consuming 27 courses, "made me feel like I was a character in a Dickensian novel. Because — I cannot impart this enough — there was nothing even close to an actual meal served."

For the remainder of TODAY’s article including a response from the restaurant CLICK HERE.

Bros., Lecce: We Eat at The Worst Michelin Starred Restaurant, Ever

Excerpt from the restaurant review what went viral:

From Geraldine DeRuiter: There is something to be said about a truly disastrous meal, a meal forever indelible in your memory because it’s so uniquely bad, it can only be deemed an achievement.

The sort of meal where everyone involved was definitely trying to do something; it’s just not entirely clear what. I’m not talking about a meal that’s poorly cooked, or a server who might be planning your murder—that sort of thing happens in the fat lump of the bell curve of bad.

Instead, I’m talking about the long tail stuff – the sort of meals that make you feel as though the fabric of reality is unraveling. The ones that cause you to reassess the fundamentals of capitalism, and whether or not you’re living in a simulation in which someone failed to properly program this particular restaurant.

The ones where you just know somebody’s going to lift a metal dome off a tray and reveal a single blue or red pill. I’m talking about those meals. At some point, the only way to regard that sort of experience—without going mad—is as some sort of community improv theater.

You sit in the audience, shouting suggestions like, “A restaurant!” and “Eating something that resembles food” and “The exchange of money for goods, and in this instance, the goods are a goddamn meal!” All of these suggestions go completely ignored. That is how I’ve come to regard our dinner at Bros, Lecce’s only Michelin-starred restaurant, as a means of preserving what’s left of my sanity.

It wasn’t dinner. It was just dinner theater. No, scratch that. Because dinner was not involved. I mean—dinner played a role, the same way Godot played a role in Beckett’s eponymous play. The entire evening was about it, and guess what? IT NEVER SHOWED.