ONE PICTURE WORTH A 1000 WORDS / Taps for Neil Armstrong 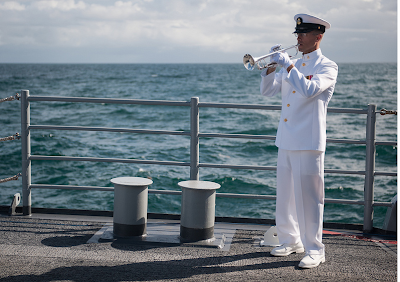 BURIAL AT SEA—Apollo 11 astronaut Neil Armstrong, the first man to set foot on the moon, was buried at sea on September 14, 2012.

The poignant photograph here was taken by NASA’s Bill Ingalls aboard the USS Philippine Sea (CG58) in the Atlantic Ocean off the coast of Florida. Chief Musician for the United States Navy Band, Gunnar Bruning, played taps.

For the complete service of remembrance for Neil Armstrong at the National Cathedral in Washingont DC on September 13,  2012 place the following url address in your search engine address line: