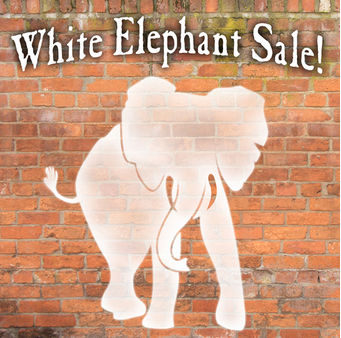 BURDEN OF HISTORY—Across America, a “White Elephant Sale,” means simply having a yard or garage sale usually held on a weekend morning. No deeper meaning implied. That is until you start checking into history of the term “White Elephant.” More on that at the end of this blog.

Meanwhile, Save Our History Organisation in San Diego is conducting its first annual “White Elephant Sale, September 15 from 10 am to 5 pm on the south lawn of the icon Arts & Crafts style Marston House, just west of Balboa Park (3525 Seventh Avenue).

For ten bucks, SOHO is offering an early bird preview of sale items from 9 am to 10 am.

Sale treasures and collectibles include everything from antiques to art, jewelry, sporting goods to boutique items, architecture books and other architectural salvage materials and furnishings to vintage clothes.

WHERE THE TERM WHITE ELEPHANT ORIGINATED.
A white elephant is an idiom for a valuable possession which its owner cannot get rid of, and whose cost of ownership is sometimes more than what it’s worth. A favored sports car that has turned into a lemon can be called a “white elephant” because it has become too costly to fix. And the repairs outweigh its “Blue Book” value.

Similarly, a white elephant sale isn’t just your standard yard sale, but a sale in which you get rid of things have become a burden but are too valuable to just throw away

The Internet is rife with other origins of the phrase. The most popular is as follows:

“…white elephant came from the fact that albino elephants are quite rare.

“As you can imagine, however, the upkeep of an elephant isn’t easy, and the cost of feeding can run up a pretty steep bill at the local farmers’ market;

“Therefore, the story goes, the Thai king would reserve the white elephant as a gift for only those friends he most wanted to get even with. The receiver of such a gift would be initially pleased with the gift, but it wouldn’t take long before he was financially ruined as he tried to maintain the giant animal;

“Whether the origin of the phrase is accurate or not, this is exactly what ended up happening to King Charles I of England;

“He was presented with an albino elephant from Siam. It being a time when the British king was trying to raise funds, the expense became overwhelming, and Charles suffered great hardship;

“His wife even had to forfeit her annual trip to Bath that year;

“Buddha’s mother was said to have a dream of a white elephant presenting her with a lotus flower, a symbol of wisdom and purity, on the eve of giving birth;

“Another example of a white elephant is the “Spruce Goose” aircraft designed by Howard Hughes. It was called a “plywood white elephant” by Hughes’ associate Noah Dietrich;

“In other words, what a Royal Pain white elephants are.”