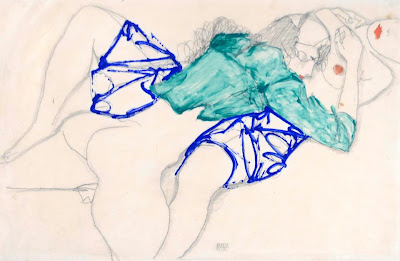 FRIDAY LECTURE—Yikes. Need to post this fast. Tomorrow morning at 10 am there will be a significant lecture on German Expressionist art during the years 1905 through 1937 at the James Copley Auditorium, San Diego Museum of Art, 1450 El Prado Balboa Park, San Diego, CA.

The Human Beast lecture will take a look at the interaction between politics and creativity during the first half of the 20th century. Speaker is Cornelia Feye, Athenaeum Music and Arts Library School of the Arts and Arts Education Director. German art experienced an extraordinary surge of creativity in the years before World War I and throughout the Weimar Republic. In 1905 Ernst Ludwig Kirchner founded the expressionist movement Die Brücke together with like-minded artists in Dresden.

In Munich Wassily Kandinsky started the Blaue Reiter with Paul Klee, Franz Marc and August Macke in 1911. Artists like Käthe Kollwitz, Gustav Klimt, Egon Shiele (pictured in this blog); Emil Nolde, Max Beckmann and Otto Dix were associated with the movement. Several started to teach at the Bauhaus School and their influence grew beyond Germany - until the Nazi regime put an end to all avant-garde arts by declaring them “degenerate” and confiscating thousands of artworks in museums and private collections all over Germany.

This lecture will look at the interaction between politics and creativity during this time period. Local interest in German Expressionist art was peaked earlier this summer when San Diego Museums Receive Significant Bequest. A private art collection amassed over more than 30 years is returning home to San Diego, bringing to the city masterpieces of minimalism and of German Expressionism.

The San Diego Museum of Art and the Museum of Contemporary Art San Diego (MCASD) are both the recipients of a major bequest from the late Dr. Vance E. Kondon and his wife Elisabeth Giesberger. Kondon was one of San Diego’s premier art collectors and an avid supporter of the city’s cultural scene. His collection ranged from figurative works from the first half of the 20th century to refined abstract pieces from 1950 forward.

Other major artists represented in the collection include Max Beckman, George Grosz, Ernst Kirchner, Oskar Kokoschka, and Emil Nolde. “What makes this gift truly special is the rarity of the works of art we are inheriting,” said Roxana Velásquez, Executive Director at The San Diego Museum of Art. “We are honored to be a part of this exceptional endowment and to hang these new works of art alongside our already existing compilation of Expressionist paintings and drawings. This gift will bring extraordinary depth to our world-class permanent collection.”

MCASD received 30 important works of contemporary art from the 1950s to the early 1980s. “True museum collections are built upon this type of generous philanthropy,” said Hugh Davies, the David C. Copley director and CEO at MCASD. “As a past board member, Vance Kondon’s collection represents the sensibilities of the museum and its commitment to reductive abstraction.

Simply receiving Robert Ryman’s canvas, Cable, would have been gift enough, but Vance Kondon went further by gifting 30 works that together reflect his legacy even as they expand upon the Museum’s own identity. We are truly honored to receive this incredible gift.” Highlighting the bequest, the San Diego Museum of Art will in the summer of 2012 dedicate an exhibition to German Expressionism, featuring the new acquisitions, works previously in the permanent collection, and a select group of loans.

If you missed Friday's (9-21-12) lecture, The Human Beast: German Expressionism at the San Diego Museum of Art, will be on view through November 11, 2012.