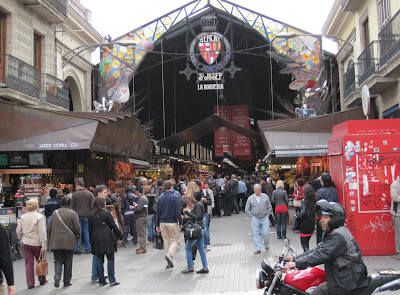 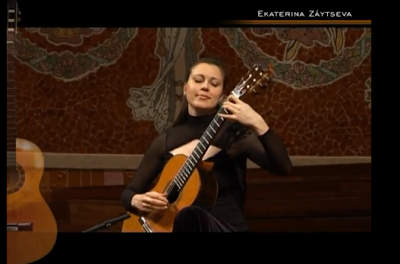 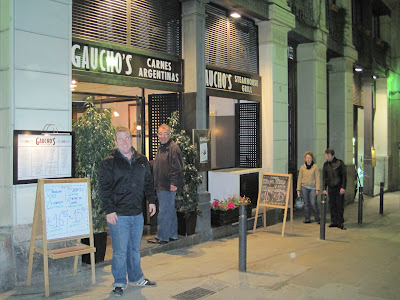 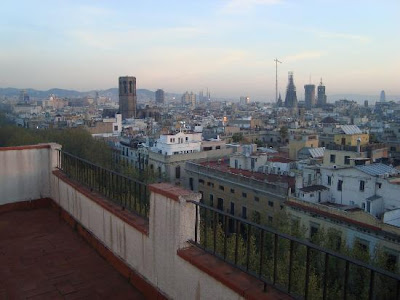 CONCERT SERENDIPITY--A late morning stroll from Hotel Ramblas, along La Rambla, a popular boulevard in Barcelona was particularly enjoyable because we had no agenda for the day or that evening other than taking in another sunny spring day along the Spanish Mediterranean.

After a pastry and espresso at Escriba, we came across a smiling pamphleteer handed us a notice of a classical guitar concert for the following evening. The brochure was well done and it included a color photo of the venue, Basilica Santa Maria del Pi. The concert was part of a series called Maestros de la Guitarra Espanola. That night the featured performer was Ekaterina Zaytseva.

The decision was easy. We strolled over to Santa Maria del Pí, which is nestled between the Plaça del Pí and the Plaça Sant Josep Oriol in Barcelona’s historic “Gothic Quarter”. The Plaça Sant Josep Oriol is home to an artists' market on the weekend and has a lively outdoor café culture during the week. There we purchased ticket for the concert that night and continued on our stroll of Barcelona.

We arrived in time to enjoy the plaza and the church itself. The fourteenth-century Esglesia de Santa Maria del Pí is named for a pine tree (“pí” in Catalan) that once stood nearby. Primarily built in Catalan Gothic style, the vast interior of the basilica has a single, wide hall with chapels beneath the buttresses and a giant rose window at the entrance. The stained glass windows are not from the original church, but the oldest date from 1718.

There were no adornments aside from a wooden chair and small footstool to indicate a concert was to be held. We found seats in the back at the end of the center church aisle. We had an unobstructed view of Ekaterina, a 20s something striking brunette in a long flowing black dress.

No one announced her prior to her bringing her guitar on stage. She immediately launched into Sonata K380 by Domenico Scarlatti (1683-1757). The brochure, which was handed to us earlier in the day, was also our program for the evening.

I figured out that the series was homage to composers from Spain not performers because, Ekaterina is Swiss born.

Each of the nine compositions was flawlessly performed. She stood at the end of each piece, bowed and sat down to begin the next number. At the end of the program she announced that her encore would be a work she had composed.

At the end, we all applauded and exited. The minimalist performance was refreshing. Afterwards, we continued strolling Barcelona in search of our next adventure, which happened to be a popular Argentine-style steak house. The recommendation for Gaucho’s Restaurant came from our tour guide, our son, Michael, who was attending a year-aboard program via San Jose State when this tourist snapshot was taken.