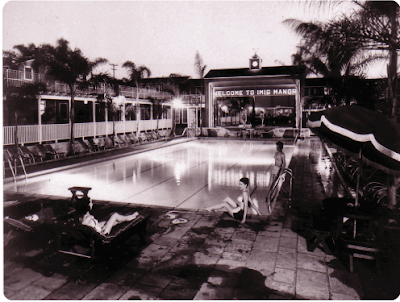 High-schooler Ferris Bueller (Matthew Broderick) knows everyone -- and every trick to faking an illness. So with the entire school convinced he's at death's door, Bueller grabs his girlfriend (Mia Sara) and best friend (Alan Ruck) and hits the streets of Chicago for a well-deserved day off. Fed-up principal Ed Rooney (Jeffrey Jones) is determined to catch Bueller and put a premature end to his field trip. But it's tough to outfox Ferris.

Come watch Ferris Bueller's Day Off and take a swim in the Imig Manor/Lafayette Hotel’s (circa 1946) Olympic size pool reportedly designed by the 40s movie icon Johnny Weissmuller. In the 1920s, Weissmuller won five Olympic Gold medals and 67 world records. He later became the popular star of 11Tarzan Hollywood flicks.
The movie screen will be set up in the Cabana facing out towards the pool, and you can enjoy this hilarious classic for only $3 for one, or $5 for two!

Grab a bite to eat at Imig's Kitchen, and take a swim while the movie plays! (Sponsors recommend waiting 30 minutes before you jump in, of course!)