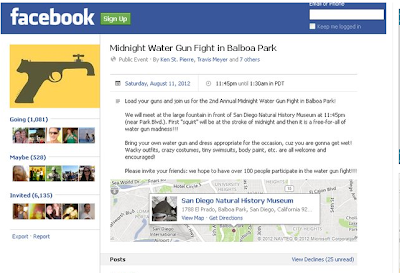 SMOKING SQUIRT GUN—Careful what you wish for? The lesson is huge regarding irresponsible use of social media as more than 1,000 persons showed up for an event in San Diego’s historic Balboa Park that turned into hooliganism. The facebook post last Saturday called on the public to attend a free for all squirt gun fight. The organizers listed at the top of the facebook post say they expected or at least hoped for 200 to attend.

Fine print in local media coverage said this was the second time the squirt gun fight had been held.

So far, police are investigating the thousands of dollars in damage done to the famed Lily Pond in the heart of the park. Ponds filled with Koi make for excellent ammunition bunkers.

And, the City is angry. The largest newspaper in town is blaming the cops.

The post names names, but to date (8-14-2012) no apologies have come forth from the organizers. Is that too much to ask?

UPDATE: For a timely capsule of Lilygate please go to: http://www.sandiegobugle.com/liar-liar-san-diego-mayoral-candidates-engage/