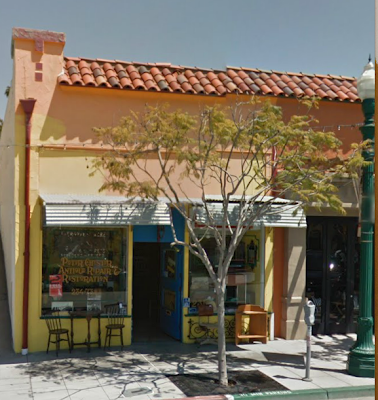 HACIENDA HEAQUARTERS--Peter and Catherine Chester operate a retail shop in Little Italy that a lot of North Parkers wish was located in our ‘hood. Called The Bungalow Store (2317 India St., 619-234-7383), the business specializes in furnishings, art, lighting and pottery mainly in the following genres: Arts & Crafts, Spanish Revival, Rancho and Hacienda styles.

“We feel that we have a good business product and service aimed at bungalow homeowners in San Diego and all over California,” says Peter. The shop’s website (www.thebungalowstore) opens up yet another arena with clients across the United States.

Whatever the style of bungalow enjoyed by the homeowner, the year-old Little Italy shop provides furniture, lighting and art specific to the period from the‘teens, ‘20’s, ‘30’s and ‘40’s when these homes were built.
The couple has been in antiques sales and restoration since our graduation from college in 1973, even made a dollar or two from it during college. Their focus has varied over the years from American Oak, 18th and 19th century Americana and mid-century modern.

Over the past several years the Chester’s say they’ve grown in their appreciation for the bungalow home in San Diego and California in general. “Not only did our passion grow for these great furnishings, but we saw a business opportunity, a mission if you will, to educate homeowners as well as offer up period specific items relating to the bungalow home.”
Peter’s quick to add, the “bungalow home” is actually comprised of many different styles and influences, some reflecting revival styles that began in San Diego. “The 1915 San Diego Exposition was the cauldron for the revival of the Spanish and Moorish (North African) styles that spread all across California by Architects Bertram Goodhue and William Templeton Johnson. So, along with Spanish, you have the Moorish and other Mediterranean styles. With the Craftsman home come the Prairie influence, Japanese and the Swiss.”

As the Spanish Revival style became popular a void for furnishings was filled by the Mason Furniture Co. of Los Angeles, he says. Approached by Barker Bros., a very large furniture retailer, Mason designed a line of furniture that was uniquely California. It was called “Monterey.” This line of furniture was to harken back to the 19th century days of the California Rancho. Solid, well-made, comfortable and casual are the hallmarks of Monterey furniture. There are several other makers of the California Rancho style, notably Imperial and Del Rey as well as Coronado. Coronado furniture was part of the original furnishings of Casa de Pico Motor Court designed by Richard Requa in Old Town.

If you want to gab about Craftsman or Spanish bungalows, you’ll find kindred spirits at The Bungalow Shop.
Back to the Chester’s: “Owning an older bungalow home is both a challenge and an adventure,” says Peter, “Furnishing it with appropriate items from the period can be the same challenge and adventure. One can simply choose to furnish with the new quickly, or experience the fun and adventure of looking for just the right piece to fit that spot. Not everyone has the patience, but for those that do, the “hunt” and the find can be a very rewarding past time. It’s for those people we have our shop.”