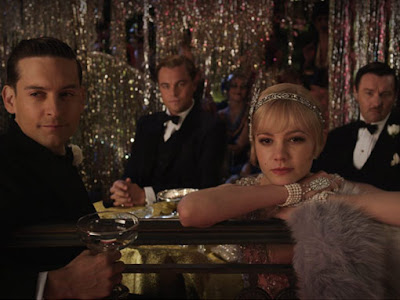 In case you too napped during English class and ozoned details of the plot, here’s a quick plot summary thanks to someone at Wikipedia. It’s not spoiling the movie—the novel was published in 1925 for Pete’s sake and by next summer we’ll forget the story line, again. The Great Gatsby as a novel is over rated. The fact the new film version hasn't been rushed to be released is one harbinger that this 1920s study of shallow characters won't be big box office.

The story begins with the narrator, Nick Carraway, a Midwesterner who has graduated from Yale and fought in World War I, returning home to begin a career.

He is restless and has decided to move to New York to learn the bond business. The novel opens early in the summer of 1922 in West Egg, Long Island, where Nick has rented a house next to the mansion of Gatsby, the mysterious host of regular, extravagant parties.

Tom and Daisy Buchanan live across the bay in the more fashionable East Egg, where those coming from old money live. Daisy is Nick's cousin, and Tom and Nick had been in the same senior society at Yale College. They invite Nick to dinner at their mansion where he meets a young woman named Jordan Baker, whom Daisy wants Nick to date. Daisy, who is still as beautiful and charming as she ever was, now has a young child. Tom is muscular, brusque and considers himself an intellectual. During dinner the phone rings, and when Tom and Daisy leave the room, Jordan informs Nick that the caller is Tom's mistress from New York.

Myrtle Wilson, Tom's mistress, lives in Flushing, Queens near a large expanse of land known as the Valley of Ashes, where Myrtle's husband, George Wilson, owns a garage. Painted on a large billboard nearby is a fading advertisement for an ophthalmologist: a set of huge eyes looking through a pair of glasses, seemingly watching the characters throughout the novel.

Around three weeks after that evening at the Buchanans', Tom takes Nick to meet the Wilsons. He then takes Myrtle and Nick to New York to a party in a flat he is renting for her. The party breaks up when Myrtle insolently starts shouting Daisy's name, and Tom breaks her nose with a blow of his open hand.

Several weeks later Nick is invited to one of Gatsby's elaborate parties. He attends with Jordan and finds that many of the guests are uninvited and know very little about their host, leading to much speculation about his past. Nick meets Gatsby and notices that he does not drink or join in the revelry of the party.

On the way to lunch in New York with Nick, Gatsby tells Nick that he is the son of a rich family ("all dead now") from San Francisco and that he attended Oxford. During lunch, Gatsby introduces Nick to his business associate, Meyer Wolfsheim, who fixed the World Series in 1919. Nick, being a moral man, is astonished and slightly unsettled.

At tea that afternoon Nick finds out that Gatsby wants Nick to arrange a meeting between him and Daisy. Gatsby and Daisy had loved each other five years ago, but he was penniless and chose to let Daisy believe that he was as well off as she was. Gatsby was then sent overseas by the army. Daisy had given up waiting for him and married Tom. After the War, Gatsby decided to win Daisy back by buying a house in West Egg and throwing lavish parties in the hopes that she would attend. His house is directly across the bay from hers, and he can see a green light at the end of Daisy's dock.

Gatsby and Daisy meet for the first time in five years, and he tries to impress her with his mansion and his wealth. Daisy is overcome with emotion and their relationship begins anew. She and Tom finally attend one of Gatsby's parties, but she dislikes it. Gatsby remarks unhappily that their relationship is not like it had been five years ago.

Tom, Daisy, Gatsby, Nick and Jordan get together at Daisy's house, where they meet Daisy's young daughter, who Daisy treats as a mere pet that she quickly gives back to a maid when the child has provided a moment's entertainment. The group decides to go to the city to escape the heat. Tom, Jordan and Nick take Gatsby's car, a yellow Rolls-Royce. Daisy and Gatsby go in Tom's car, a blue coupé. On the way to the city, Tom stops at Wilson's garage to fill up the tank. Wilson is distraught and ill, saying his wife has been having an affair, though he doesn't know with whom. Nick feels Myrtle watching them from the window.

The party goes to a suite at the Plaza Hotel, where Tom confronts Gatsby about his relationship with Daisy. Gatsby demands that Daisy leave Tom and tell him that she never loved him. Daisy is unwilling to do either, admitting that she did love Tom once, which shocks Gatsby. Tom accuses Gatsby of bootlegging and other illegal activities, and Daisy begs to go home. Gatsby and Daisy drive back together in Gatsby's car, followed by the rest of the party in Tom's car.

PLOT CONTRIVANCE WARNING
On the way home by Wilson's garage, Myrtle runs out into the street after an explosive argument with her husband and the yellow Rolls-Royce hits and kills her before speeding off. Gatsby later tells Nick that Daisy was driving, but he will take the blame. When Tom arrives at Wilson's garage shortly afterwards, he is horrified to find Myrtle dead. Tom believes that Gatsby was driving, and therefore killed her, and drives home in tears. Once home, Tom and Daisy seem to have reconciled. After a sleepless night, Nick goes over to Gatsby's house where Gatsby ponders the uncertainty of his future with Daisy.

Wilson has been restless from grief, convinced that Myrtle's death was not accidental. He goes around town inquiring about the yellow Rolls-Royce. Wilson finds out that Gatsby owned the car, and while Gatsby is relaxing in his pool, Wilson shoots and kills him before killing himself.

Nick struggles to arrange Gatsby's funeral, finding that while Gatsby was well connected in life, very few people are willing to attend his funeral, not even Meyer Wolfsheim. Meanwhile, Daisy is unable to be reached after going off on vacation with Tom. Finally, the only mourners are Nick, a few servants, Mr. Gatz (Gatsby's father) and an owl-eyed guest from Gatsby's grand parties. Mr. Gatz proudly tells Nick about his son, who was born into a penniless family in North Dakota as James Gatz and worked tirelessly to improve and reinvent himself.

After this whole affair with Gatsby, Nick decides to move back West, breaking things off with Jordan Baker, whom he had been dating for a while. Also, Tom reveals that it was he who told Wilson that Gatsby drove the yellow car. Nick loses respect for the Buchanans and does not communicate with them again.