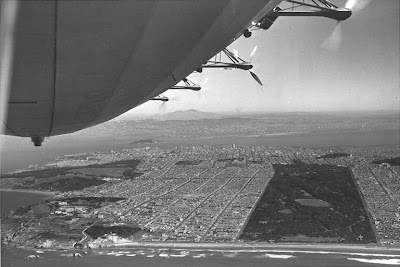 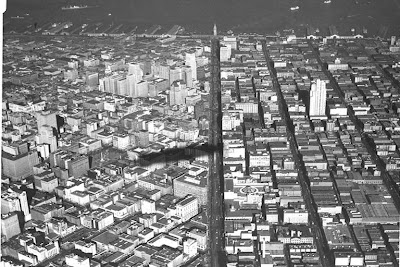 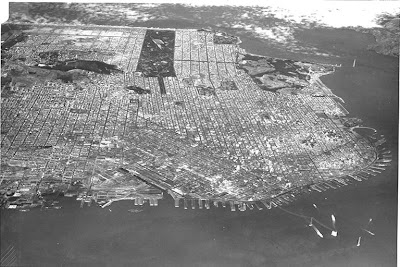 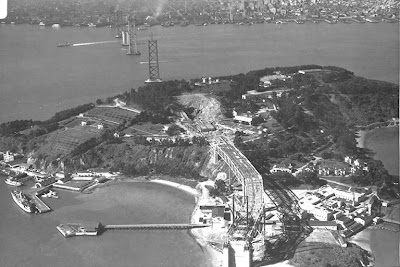 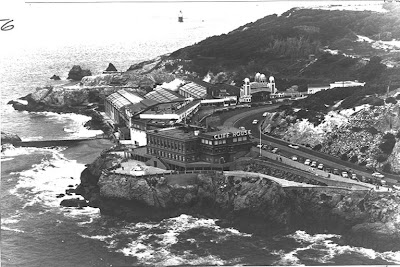 RARE AERIALS—It is so much fun to go exploring NASA’s Internet public archives to see what can be found. The following images were photographed from a U.S. Navy blimp stationed at nearby Moffett Field during the years when the San Francisco/Oakland Bay Bridge was under construction.

BAY BRIDGE FACTS
Bay Bridge construction began July 9, 1933
The bridge opened November 12, 1936
Until 1962 cars drove in both directions on the upper deck, while trucks and trains travelled in both directions on the lower deck
The bridge carried 9 million vehicles in its first year (102,200,000 per year today)
The cost of the original bridge was $77 million in 1936 (included Transbay Transit Terminal)
Key System trains operated on the bridge from 1938 to 1958
In 1962 the bridge was reconfigured to carry cars and trucks only
The East Span suffered a partial collapse in the 1989 Loma Prieta earthquake
The Bay Bridge was the longest bridge in the world when it was built
The center West Span anchorage was larger than any building in San Francisco at the time
Opening celebrations around the area lasted four days.


Captions: Top to Lower:
--View from the blimp of 1930s San Francisco; looking east to Mt. Diablo at horizon
--Tip of Blimp shadow crosses Market Street, downtown, while tail (left) shadow is near Union Square
--Look Ma, no bridges--yet
--Great shot of Yerba Buena Island. Note the tunnel being built at the top of the island.
--Legendary Cliff House on the Pacific Ocean; this version was built in 1909.