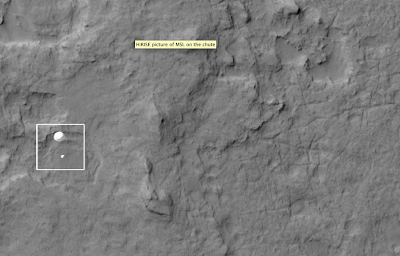 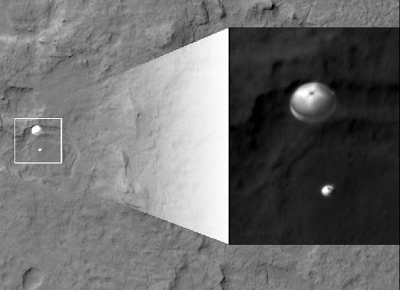 AMAZING PRECISION--If landing NASA's Curiosity rover on Mars with precision wasn’t enough NASA’s international team also happened to have an orbiting Mars satellite in perfect position to capture a photo of the lander parachuting to its Martian target. If Mars already had humans on the planet Curiosity would have no doubt delivered pizza as well.

The following is a release from NASA. Images courtesy of NASA/JPL-Caltech/Univ. of Arizona.

Curiosity and its parachute were spotted by NASA's Mars Reconnaissance Orbiter as Curiosity descended to the surface on Aug. 5 PDT (Aug. 6 EDT). The High-Resolution Imaging Science Experiment (HiRISE) camera captured this image of Curiosity while the orbiter was listening to transmissions from the rover. Curiosity and its parachute are in the center of the white box. The rover is descending toward the etched plains just north of the sand dunes that fringe "Mt. Sharp." From the perspective of the orbiter, the parachute and Curiosity are flying at an angle relative to the surface, so the landing site does not appear directly below the rover.

The parachute appears fully inflated and performing perfectly. Details in the parachute, such as the band gap at the edges and the central hole, are clearly seen. The cords connecting the parachute to the back shell cannot be seen, although they were seen in the image of NASA's Phoenix lander descending, perhaps due to the difference in lighting angles. The bright spot on the back shell containing Curiosity might be a specular reflection off of a shiny area. Curiosity was released from the back shell sometime after this image was acquired.

This view is one product from an observation made by HiRISE targeted to the expected location of Curiosity about one minute prior to landing. It was captured in HiRISE CCD RED1, near the eastern edge of the swath width (there is a RED0 at the very edge). This means that the rover was a bit further east or downrange than predicted.

"If HiRISE took the image one second before or one second after, we probably would be looking at an empty Martian landscape," said Sarah Milkovich, HiRISE investigation scientist at NASA's Jet Propulsion Laboratory in Pasadena, Calif. "When you consider that we have been working on this sequence since March and had to upload commands to the spacecraft about 72 hours prior to the image being taken, you begin to realize how challenging this picture was to obtain."

The image of Curiosity on its parachute can be found at: http://www.nasa.gov/mission_pages/msl/multimedia/pia15978b.html

The image was taken while MRO was 211 miles (340 kilometers) away from the parachuting rover. Curiosity and its rocket-propelled backpack, contained within the conical-shaped back shell, had yet to be deployed. At the time, Curiosity was about two miles (three kilometers) above the Martian surface.

"Guess you could consider us the closest thing to paparazzi on Mars," said Milkovich. "We definitely caught NASA's newest celebrity in the act."

In other Curiosity news, one part of the rover team at the JPL continues to analyze the data from last night's landing while another continues to prepare the one-ton mobile laboratory for its future explorations of Gale Crater. One key assignment given to Curiosity for its first full day on Mars is to raise its high-gain antenna. Using this antenna will increase the data rate at which the rover can communicate directly with Earth. The mission will use relays to orbiters as the primary method for sending data home, because that method is much more energy-efficient for the rover.

Curiosity carries 10 science instruments with a total mass 15 times as large as the science payloads on the Mars rovers Spirit and Opportunity. Some of the tools are the first of their kind on Mars, such as a laser-firing instrument for checking rocks' elemental composition from a distance. Later in the mission, the rover will use a drill and scoop at the end of its robotic arm to gather soil and powdered samples of rock interiors, then sieve and parcel out these samples into analytical laboratory instruments inside the rover.

To handle this science toolkit, Curiosity is twice as long and five times as heavy as Spirit or Opportunity. The Gale Crater landing site places the rover within driving distance to layers of the crater's interior mountain. Observations from orbit have identified clay and sulfate minerals in the lower layers, indicating a wet history.

Notes and Credits:
--For more info on the mission, visit http://www.nasa.gov/mars and http://mars.jpl.nasa.gov/msl/ .

--HiRISE is operated by the University of Arizona, Tucson. The instrument was built by Ball Aerospace & Technologies Corp., Boulder, Colo. The Mars Reconnaissance Orbiter Project and the Mars Exploration Rover Project are managed by NASA's Jet Propulsion Laboratory, Pasadena, Calif., for NASA's Science Mission Directorate, Washington. JPL is a division of the California Institute of Technology in Pasadena. Lockheed Martin Space Systems, Denver, built the orbiter.

--For more about the Mars Reconnaissance Orbiter, see http://www.nasa.gov/mro .

-- The mission is managed by JPL for NASA's Science Mission Directorate in Washington. The rover was designed, developed and assembled at JPL.