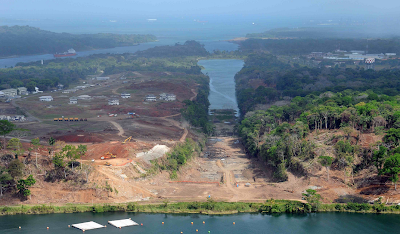 DIGGING IT--Popular Mechanics Magazine, has pointed out “…Ninety-eight years after it first opened for business (Aug. 15, 1914), the Panama Canal is finally maxed out. Designed before the Titanic was even on drawing boards and while the Wright brothers were still learning to fly, the canal today handles more traffic than its builders could have ever imagined. About 14,000 vessels carrying 5 percent of the world's ocean cargo -- 280 million tons -- pass through the waterway each year. Despite running the canal around the clock -- at close to 90 percent of its theoretical maximum capacity -- canal officials are struggling to keep up…”


Here’s what’s happening:
--Building new locks. In October 2006, Panama voted and approved the construction of two new sets of locks: one on the Pacific and one of the Atlantic of the Canal.
-- The Cost: $5.26 billion (US).
--Widening and dredging navigational channels in Gatun Lake
--Why the current canal is outdated. Egypt's Suez Canal already handles 20 percent more traffic than the Panama Canal and generates more than twice as much revenue. And the lockless, sea-level shortcut between Europe and Asia can accommodate supertankers that dwarf the largest vessels transiting the Central American isthmus.

History: The Panama Canal is a 77 km (48 mi) ship canal in Panama that joins the Atlantic Ocean and the Pacific Ocean and is a key conduit for international maritime trade. Annual traffic has risen from about 1,000 ships in the canal’s early days to 14,702 vessels in 2008. When completed on August 15, 1914, the Panama Canal cut the shipping distances from New York to San Francisco in half. No longer having to go ‘round Cape Horn, distances went from 14,000 miles to 6,000 miles.

Completion: The project will be completed in 2014 in time for the 100th anniversary of the completion.

Caption: Recent preliminary excavation on the Atlantic Ocean side of Panama for new locks under construction is under way to expand the size and capacity of the Panama Canal.

Quote: “Despite the financial crisis that still affects most of the world economies nowadays, the programme remains on schedule to be finalized in 2014 as planned and in accordance to the initial budget that was allocated to the project.” --from AllAboutShipping.Co.UK